As of mid-June, northern and northeastern Thailand were experiencing their worst drought in nearly 20 years. Thai officials declared 53 provinces disaster areas, with more than 6.4 million people affected and 58,300 acres of crops damaged by the dry weather. Thailand is the world's largest exporter of rice. Production estimates for the August cycle—there are two to four annual cycles—fell from five million metric tons to two million (Source: Thailand Business News).

In June, Israel was in the midst of one of its longest and most severe droughts since the 1920s. (Drought data has been collected since 1915.) Lasting six years to date, a meteorological station near Holon reported a deficit of 21.4 inches (544 mm) of rain during that time, an amount that is slightly above the average annual rainfall for that area (Source: Haaretz).

Parts of southern China experienced heavy rains from May 31st–June 2nd. More than nine inches (230 mm) was recorded in Guangxi's Cenxi City within a 12-hour period (Source: Xinhua). Landslides and floods were responsible for at least 53 deaths and more than 200,000 people were evacuated from their homes (Source: AFP; Reuters). Torrential downpours from June 13th–24th led to more flooding in the South that killed at least 377 people, left 119 missing, and destroyed thousands of homes. Fujian and Sichuan provinces and the southern region of Guangxi were most severely affected by this round of storms, according to Xinhua news agency, as more than 39 inches (1000 mm) of rain fell in some areas (Source: AFP). On June 22nd, the Fuhe River in Jiangxi Province burst its protective embankment, leading to the evacuation of 95,000 residents. On June 28th, more than 100 people were reportedly buried and feared dead in a mudslide that tore through the village of Dazhai in Guizhou Province as heavy rains continued. In total, the floods affected more than 69 million people across southern China, causing economic losses of an estimated 12.1 billion U.S. dollars (Source: AFP). Torrential summer rainstorms are common in this region; however, these floods are the worst since 1998 for the area (Source: Xinhua).

Just two weeks after extensive rain and flooding severely impacted Central Europe, a new round of heavy rainfall triggered more floods in the Czech Republic, Slovakia, Hungary, and Croatia. At least two people were killed in the Czech Republic and thousands more were forced to flee their homes (Source: Reuters).

Excessive rainfall over South Central Texas on June 8th–9th caused massive flooding that led to one fatality. According to the National Weather Service, 7 to 12 inches (180 to 300 mm) of rain fell over the region in an 18-hour period. Numerous homes and businesses were damaged or destroyed. The storm system tracked northeast and dumped several inches of rain over southwestern Arkansas in the early morning hours of June 11th. Twenty people were killed by flash flooding at a remote recreational area in the Ouachita National Forest as the Little Missouri River rose almost 20 feet in less than four hours. This was the deadliest weather-related event in Arkansas since a tornado outbreak in 1997. 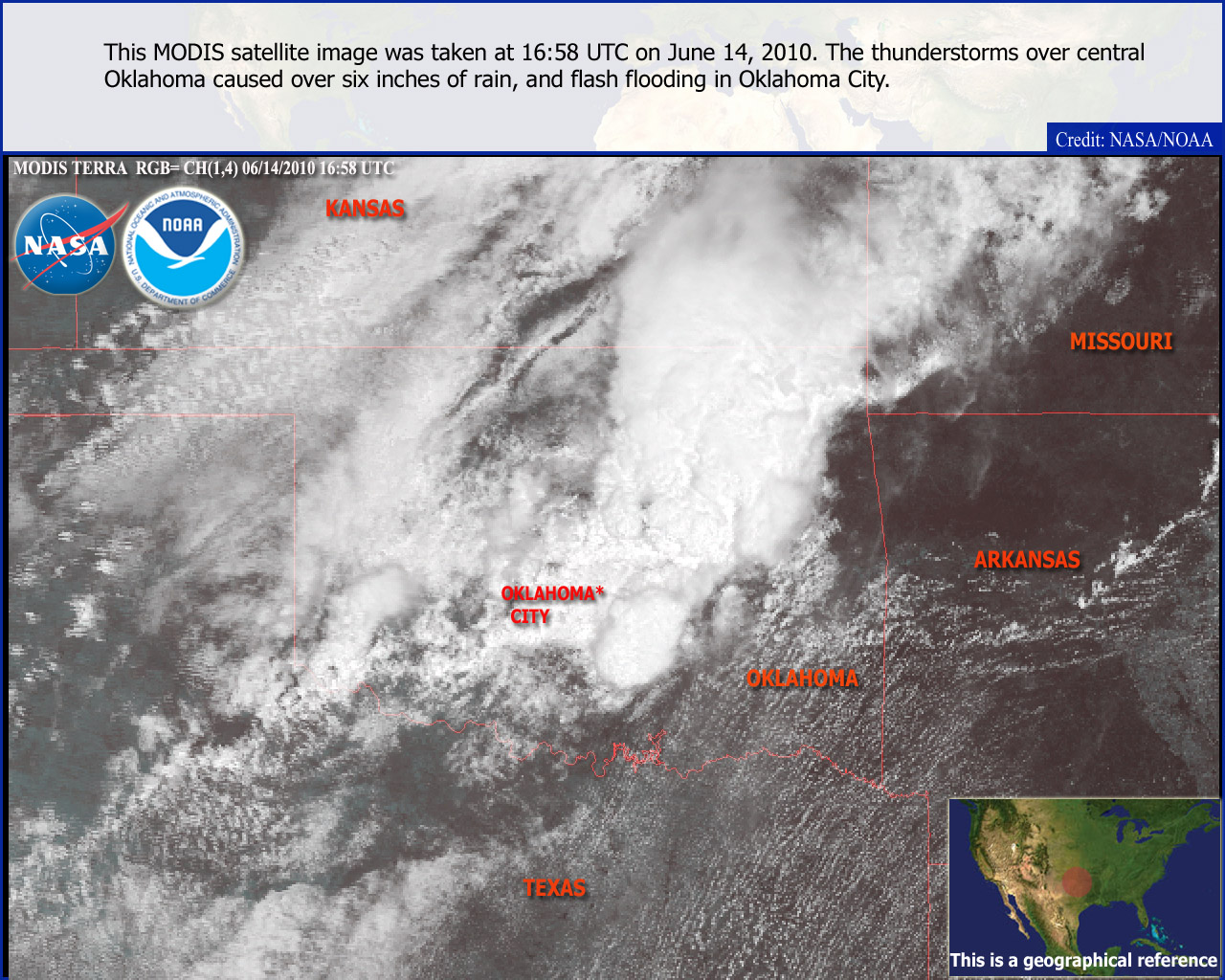 Severe storms across central Oklahoma on June 14th brought copious amounts of precipitation to the region. An all-time record 7.62 inches (194 mm) of rain fell at Oklahoma City's Will Rogers International Airport, breaking the old record of 7.53 inches (191 mm) previously set four decades ago on September 22nd, 1970. Flash flooding caused 136 injuries and a state of emergency was declared in 59 of Oklahoma's 77 counties. According to a police spokesperson in Edmond, it was the worst flooding to hit the area in 25 years (Source: CNN). 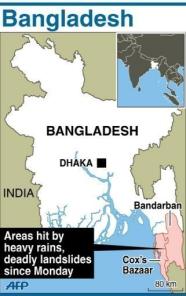 With the monsoon season underway, heavy rain on June 14th–15th brought landslides and flooding to southeastern Bangladesh and western Myanmar. At least 58 people were killed in Bangladesh—mainly in the Cox's Bazaar region—as 9.5 inches (240 mm) of rain fell within a 24-hour period and 4.5 inches (120 mm) fell in a three-hour period in many areas. A Cox's Bazaar district administrator stated that this was the worst rain event in three decades (Source: AFP). In Myanmar, at least 63 people were killed and half a million homes and buildings damaged or destroyed as torrential rains pounded the area. Myanmar's Meteorological Department reported that 13.5 inches (340 mm) of rain fell in one day in the town of Maungdaw, which lies on the border with Bangladesh (Source: Reuters; ReliefWeb). Flooding is common in this region during the monsoon season. Deforestation in both countries reportedly contributed to the flooding and landslides as the precipitation ran off bare slopes, eroding soils which blocked waterways (Source: Reuters). 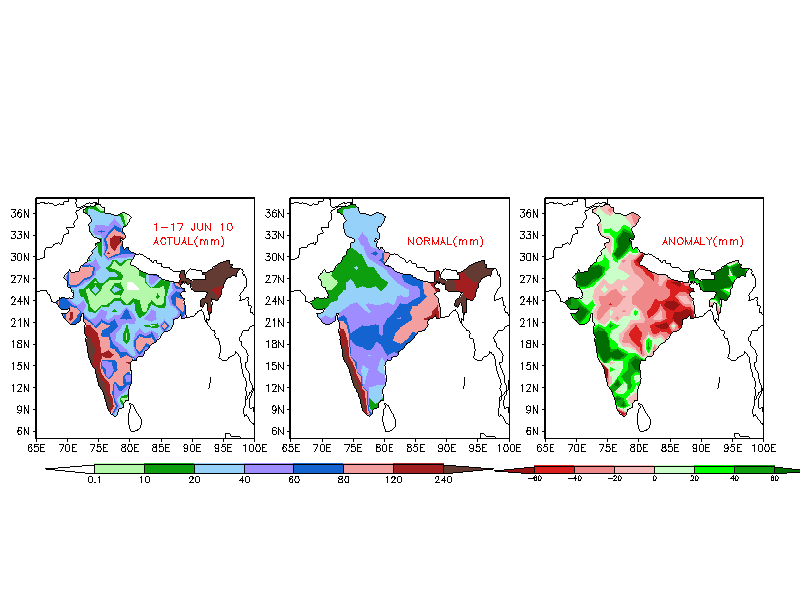 
The monsoon rains also wreaked havoc in India as heavy precipitation led to flooding and landslides that killed at least 46 people in the western state of Maharashtra. As of June 16th, the capital city of Mumbai had received 10.9 inches (278 mm) of rain for the month to date (Source: The Hindu). 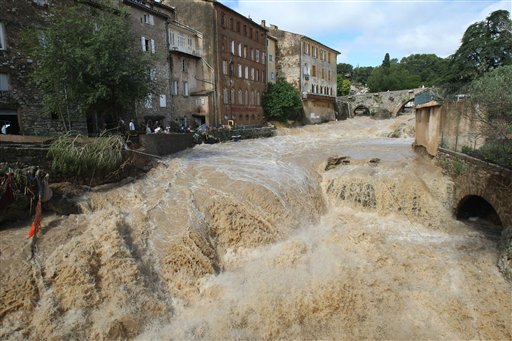 Strong storms on June 14th dumped up to 15.7 inches (400 mm) of rain in parts of the Var region in southeastern France, according to its national meteorological service, Meteo France. This is close to the amount that typically falls in a six-month period in this area. Flash flooding killed at least 25 people and left hundreds of others stranded in cars, houses, or on rooftops. Meteo France also reported that the rainfall event and subsequent flooding was the worst on record since 1827 (Source: BBC News). 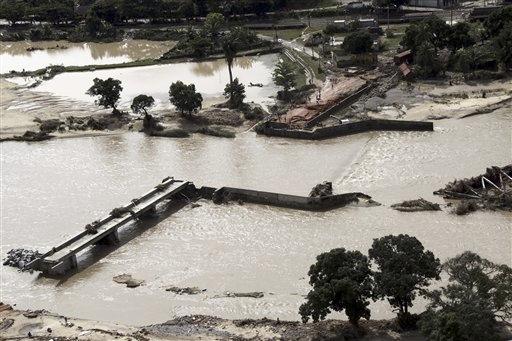 Heavy rains in northeastern Brazil from June 17th–21st left at least 72 people dead and 157,000 displaced as floodwaters inundated dozens of villages and towns in the states of Alagoas and Pernambuco (Source: AP). Some areas reportedly received more than 14 inches (360 mm) of rain during this period (Source: BBC News; ReliefWeb).

In the midst of the rainy season, heavy precipitation and flooding on June 21st led to at least 30 deaths in central Ghana, near the capital city of Accra. According to Voice of America News, Ghanaian officials called the flood disaster the worst in recent memory.

Heavy rains in Bosnia during the third week in June led to more than 30 landslides and caused rivers to overflow their banks, forcing the evacuation of thousands of residents. Although no injuries were reported, there were fears that mines planted during the Bosnian War in the 1990s were shifted by the floods, complicating de-mining efforts in the region (Source: AP).

Farther east, a week of heavy rains and subsequent flooding during the last week in June led to at least 24 deaths in northeastern Romania. More than 200 homes were destroyed and dozens of roads and bridges sustained damages (Source: BBC News; Reuters). 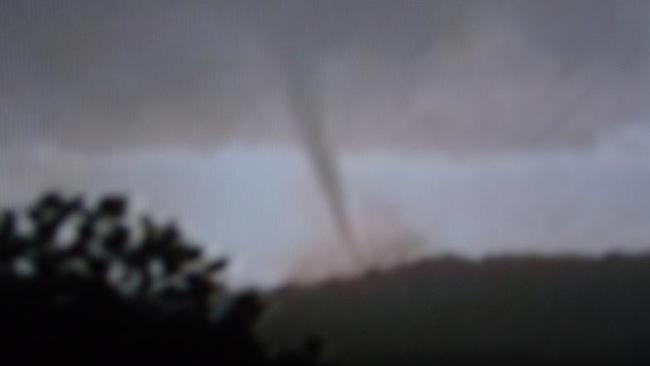 On June 3rd, an EF-1 water spout-turned-tornado struck the Australian coastal town of Lennox Head in northern New South Wales. Unseasonably warm ocean temperatures created a pocket of warm air which collided with a cold air mass, leading to a cluster of severe thunderstorms that spawned the twister. According to a meteorologist for The Weather Channel (Australia), this was an extremely unusual event, as it occurred during austral winter and the region's severe thunderstorm season is typically November–April (Source: The Daily Telegraph). With wind speeds reaching more than 90 mph (150 km/hr), dozens of homes were damaged or destroyed (Source: The Australian). 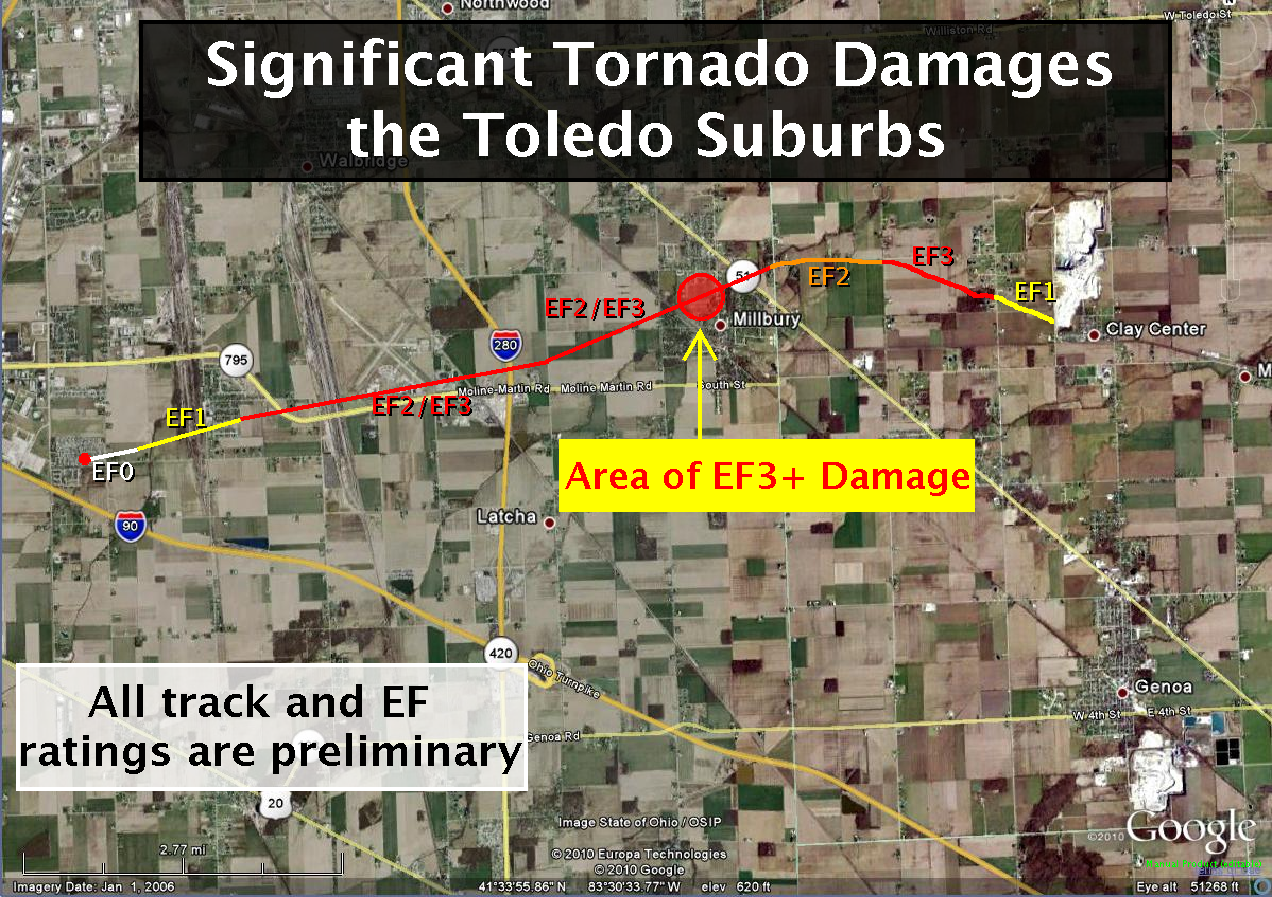 A line of severe storms tore through the midwestern U.S. on June 5th, producing several damaging tornadoes in Illinois, Indiana, Ohio, and Michigan. The largest—an EF-4 tornado with wind speeds reaching 170–175 mph (274–282 km/hr)—killed six people and caused widespread damage and destruction in the northwestern Ohio village of Millbury. This was the first EF-4 tornado to touch down in Ohio since 2002. Nearly two weeks later, on June 17th, severe storms spawned 20 tornadoes within a four-hour period in eastern North Dakota and northwestern Minnesota. Three of the tornadoes were rated EF-4, with maximum wind speeds ranging from 170–185 mph (274–298 km/hr). Four people were killed and dozens more were injured. This was the largest tornado outbreak for the area since 1999. On June 27th, strong storms spawned three tornadoes in southeastern Michigan. One of the two tornadoes rated an EF-1 touched down at a campground near Clyde Township, killing one person and injuring four others. Widespread damage was reported. For more information, please see NCDC's June 2010 Tornado Report. 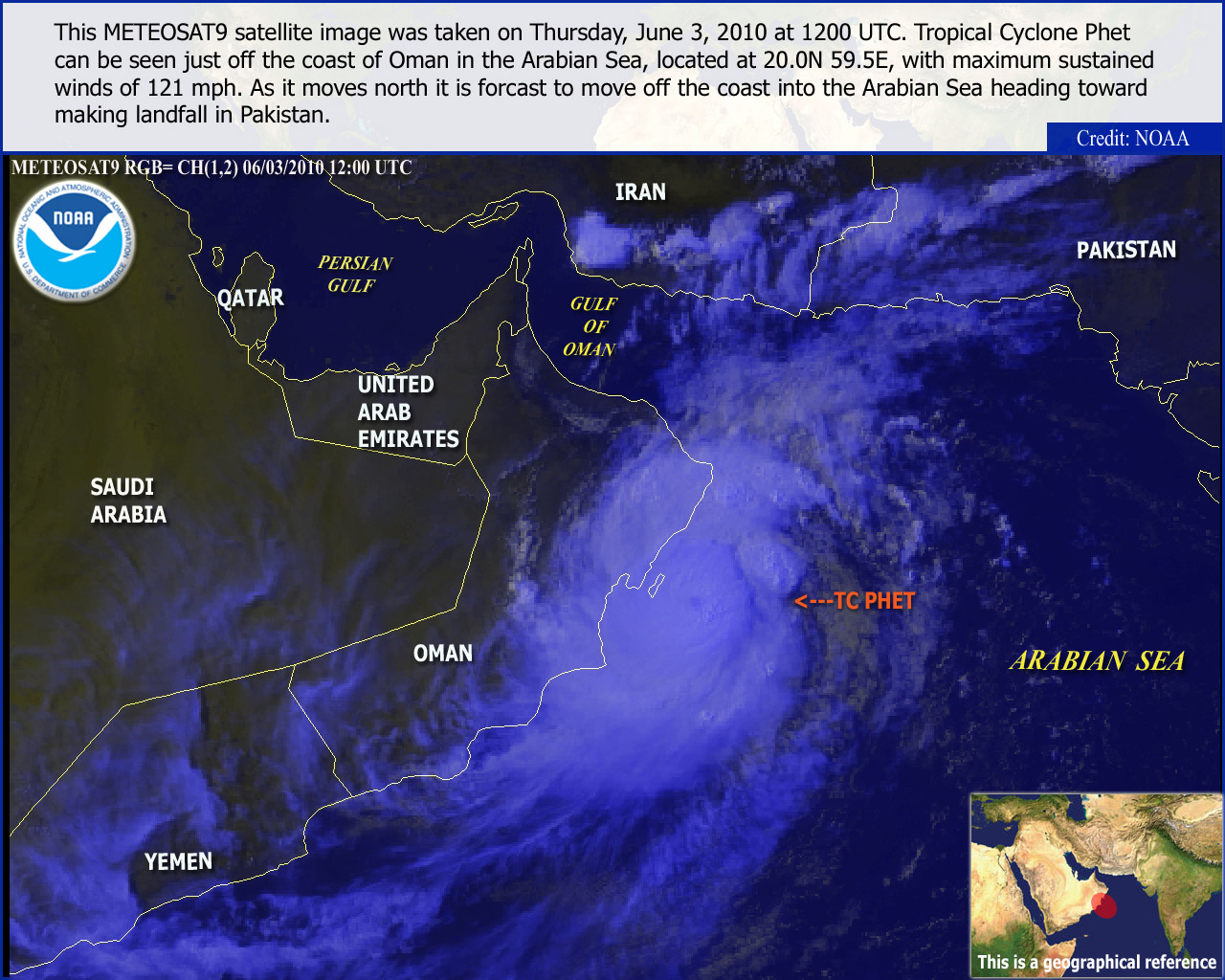 Cyclone Phet formed on May 31st and gained Category 4 status on June 2nd with maximum sustained winds of 145 mph (230 km/hr), making it the second strongest storm ever to develop in the Arabian Sea. (Category 5 Tropical Cyclone Guno in 2007 was the strongest.) The storm weakened and made its first landfall over coastal Oman as a Category 2 storm on June 4th, causing major flooding and landslides. At least 11.8 inches (300 mm) of rain fell over some areas, with winds gusting up to 125 mph (200 km/hr) (Source: NASA; CNN). At least 15 people were killed and gas and oil production was brought to a halt in the region (Source: AFP). The storm moved off the coast of Oman and veered northeast toward Pakistan. On June 5th–6th, 14.6 inches (370 mm) of rain fell over Gawadar in Balochistan Province near Pakistan's coastline, according to the Pakistan Meteorological Department. The storm killed at least 16 people and destroyed hundreds of homes in the region (Source: Indo-Asian News Service). The storm also affected the Saurashtra–Kutch region of India, dumping 2–4 inches (50–100 mm) of rain and causing at least four deaths (Source: Indian Express). 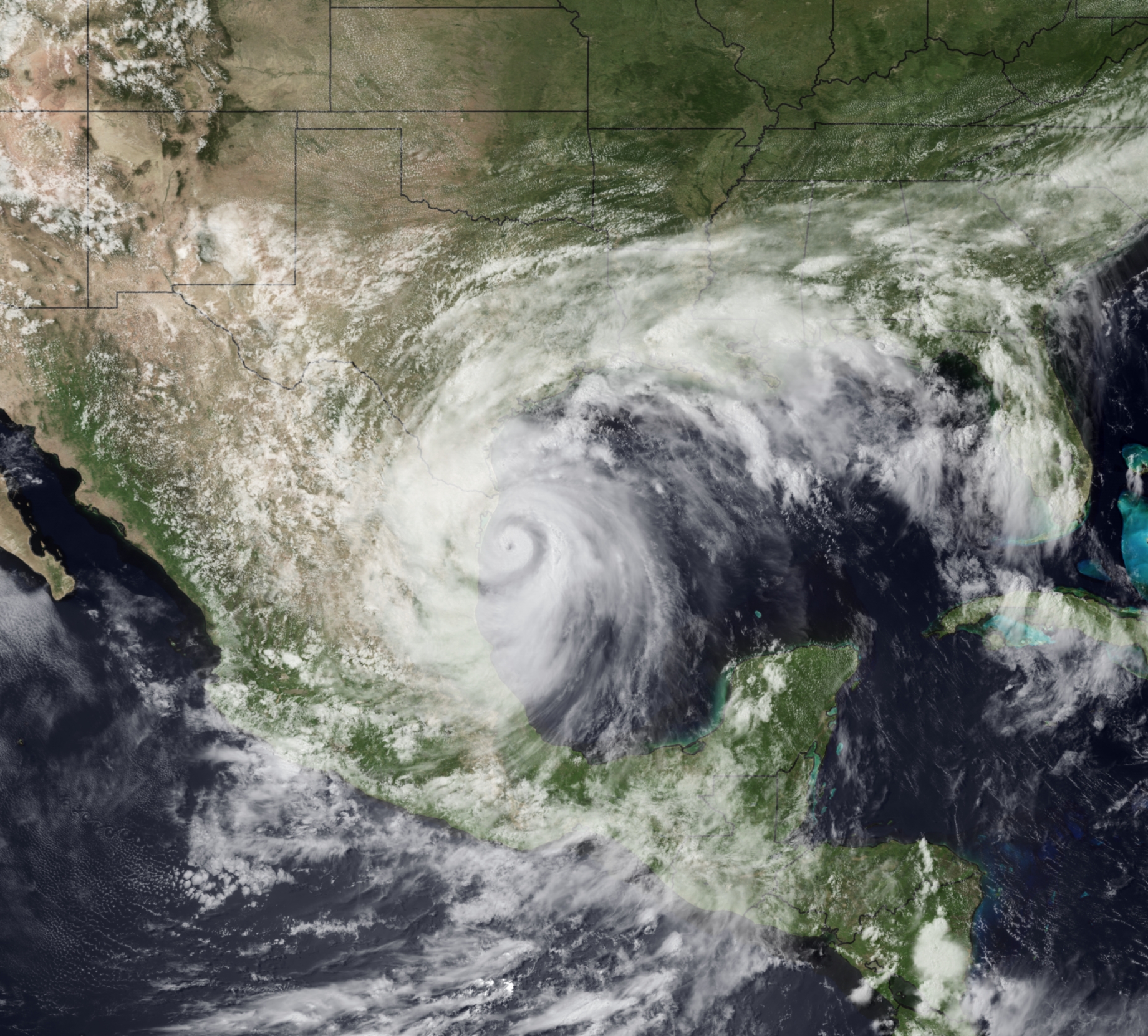 Alex, the first named storm of the 2010 Atlantic hurricane season, formed on June 25th in the Caribbean Sea. Alex first made landfall as a tropical storm near Belize City, Belize on the 27th and weakened as it crossed over the Yucatan Peninsula. Ten people were killed in Central America due to flooding impacts from Alex's heavy rains. The storm began to pick up strength as it made its way northwestward across the Gulf of Mexico. On the 30th Alex became the first June hurricane in the Atlantic basin since Hurricane Allison in 1995 and the strongest since Hurricane Alma in 1966, making landfall in northeast Mexico at Soto La Marina as a Category 2 storm with top wind speeds of about 105 mph (179 km/hr). Six people were killed by flooding and mudslides in Monterrey, Mexico as more than 31 inches (800 mm) of rain fell within a three-day period—an amount greater than the average yearly rainfall in that area (Source: Reuters). In the U.S., rainfall totals in the Brownsville, Texas region exceeded 7–9 inches (180–230 mm) in several localized areas.