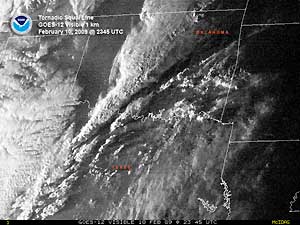 
Severe storms produced deadly tornadoes across the U.S. during February. Additional information can be found below.

In the U.S., severe to extreme drought persisted across parts of the Hawaiian Islands, the western continental U.S., northeastern Georgia, and western South Carolina. Meanwhile, severe to exceptional drought conditions were present across much of central Texas. As of February 24, 24% of the contiguous U.S. was in moderate to exceptional drought according to the U.S. Drought Monitor. This includes 26% of the western U.S., 43% of the South, 6% of the High Plains, 41% of the Southeast.

On February 5, China declared its highest level of emergency in eight provinces that were suffering from their worst drought in 50 years (Associated Press). The drought conditions (which began in November 2008) affected over 4 million people, leaving them without adequate drinking water, and threatened more than 10 million hectares (24 million acres) of crops (BBC News/Associated Press). It was reported that the drought was blamed for the occurrence of a fungal disease that damages wheat (Associated Press).

The intense heatwave that plagued southern Australia during the end of January continued to affect the region during February 6-8. The most extreme heat during the second round of the heatwave took place on February 7, which was mainly focused in Victoria. A state record and perhaps the highest temperature ever recorded in the world so far south was set that day when temperatures soared to 48.8°C (119.8°F) in Hopetoun, surpassing the previous record of 47.2°C (117.0°F) set in January 1939. Victoria's capital, Melbourne, also experienced a record as temperatures reached 46.4°C (115.5°F). This exceeded the now second highest record of 45.6°C (114.0°F) set in January 1939. South Australia recorded its second-highest minimum temperature on record for February when temperatures only fell to 33.7°C (92.7°F) on the 7th. A complete summary of Australia's heatwave is available, courtesy of Australia's Bureau of Meteorology (BoM). According to reports, the heavy use of air conditioning prompted power outages at nearly 500,000 homes and businesses. The severe heat was blamed for six heat stress fatalities in Melbourne and 22 in South Australia (Associated Press).

The extreme heatwave that scorched southern Australia during the end of January and beginning of February was accompanied by very dry conditions. These conditions contributed to the development of Australia's worst wildfires in history. Nearly 400 wildfires were blazing across Victoria; however, many feared that some of these fires were set by arsonists. Making matters worse was the wind, blowing the fires in unpredictable directions in minutes. The devastating fires decimated nearly 200,000 hectares (500,000 acres) of bushland in Victoria (CNN), burned over 2,000 homes, and killed 210 people (Associated Press/BBC News). A fatality in the fire zone occurred on February 17 when a firefighter perished when a tree branch fell on his truck. The number of fatalities exceeded the Ash Wednesday fires of 1983, which had a total of 75. The death toll of the February 2009 fires were expected to increase.

While southeastern Australia was scorched, the northeast was drenched. Heavy downpours during the first week of the month pummeled the northeast, generating floods that inundated homes and destroyed nearly one-fifth of its sugar cane fields (AFP). Over 60 percent of Queensland was submerged by water, and by February 3 much of the state was declared a disaster area. The hardest hit region was the town of Ingham, which received over 400 mm (15.7 inches) of rain on February 3 and 366 mm (14.4 inches) of rain in a 24-hour period on February 4. The excessive rain damaged 2,900 homes. Residents in northeastern Australia were on alert in snake and crocodiles roaming for search of dry land (Associated Press).

On February 7, stormy weather in the western United States caused flooding and mudslides in areas of Southern California that had previously been burned bare by wildfires. Nearly 30 homes flooded in the city of Long Beach, many of which had up to 3 feet of standing water. At least three waterspouts were spotted off the city's coast in association with this storm (Associated Press).

The Solomon Islands, located east of Papua New Guinea, were pounded by heavy rain during the first week of February, prompting floods that affected about 7,000 people. Ten fatalities were reported (IFRC).

Heavy downpours caused a devastating landslide in northern Argentina in the city of Tartagal on February 9. The landslide destroyed 30 houses, damaged over 300 homes and caused electric, water, and telephone services to be disrupted. Nearly 20,000 people were affected and two fatalities were reported with 2 others missing (IRFC).

In Brazil, heavy rainfall fell over the state of Rio de Janeiro during February 12-16. Over 3,000 residents were forced to evacuate the affected region, which was declared a disaster area (BBC News).

During the week of February 15, heavy downpours caused widespread floods over large areas of western Colombia. The torrential rain triggered the overflowing of rivers, inundating several towns on Colombia's Pacific coast. Six fatalities were reported, with 14 others missing. Nearly 2,500 families were affected by the floods (AFP/BBC News).

In the United States, severe storms affected the south-central region on the 10th, resulting in 12 preliminary reports of tornadoes along with other many reports of hail and wind damage. A cluster of tornadoes touched down across parts of central Oklahoma during the afternoon and evening hours of February 10. Four twisters hit the Oklahoma City metropolitan area, including one of EF2 intensity (National Weather Service). Three injuries were reported within the city and at least six homes were destroyed near the neighboring suburb of Edmond. Before the night ended, 15 people had been killed from the outbreak, including 8 fatalities in the hardest-hit area of Lone Grove, OK, where one tornado reached EF4 intensity (Associated Press).

The Hawaiian Islands, which average one tornado per year, had a weak tornado touch down in Kapolei, Oahu on February 11. Minor damage was caused to the Kapolei golf course and to roofs of surrounding buildings (BBC News). This was the first tornado on Oahu since December 2005. No fatalities were reported.

Severe storms blew across West Virginia on February 11, causing widespread power disruptions and the roof of a school gym to collapse and killed one person in the town of Davy (Associated Press).

Severe storms struck parts of Alabama and Georgia on February 18, producing large hail and devastating tornadoes that caused the death of one person and injured 16 others. Three confirmed tornadoes ripped through central Georgia, downing power lines and trees, destroying homes and a nightclub, and damaging schools. At the height of the storm, nearly 13,400 homes and businesses across Georgia were left without power (Associated Press).

No significant tropical cyclones reports were received during February 2009.

No significant extratropical cyclones reports were received during February 2009. 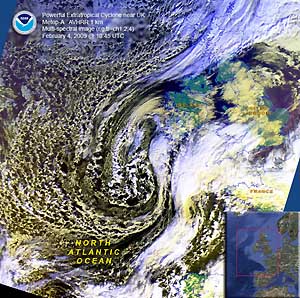 An extratropical storm brought heavy snow across parts of the United Kingdom on February 2, wreaking havoc across the country. The adverse weather was responsible for a major transportation halt. Over 250 flights were cancelled at Heathrow airport (London's largest and busiest airport) as it closed its runways and London's bus and train services were suspended, stranding millions of people (Reuters). It was reported that prior to closing Heathrow's runways, a flight landed and while taxiing towards its terminal it slid off the taxiway. Fortunately, no injuries were reported (Associated Press). The worst hit area was southeastern England, where some areas reported up to 25 cm (10 inches) of snow, with London having as much as 10 cm (4 inches) (Associated Press). This was Britain's worst snowstorm since February 1991. The lack of transportation caused nearly 6.4 million employees to miss work, and these disruptions are likely to cost businesses $4.3 billion (Associated Press). Britain's Met Office issued severe weather warning across most of the country and forecasted that parts of the southeast would be blanketed by nearly 15 cm (9 inches) of snow (Reuters). Nevertheless, many of the cities had insufficient machinery to deal with the snowfall (Associated Press). Two climbers died on Snowdon (Wales highest mountain), but it was uncertain if their deaths were related to the storm (CNN).

In the southern U.S., Florida saw several consecutive days of hard freeze between February 4 and February 7. Although unseasonable cold affected the northern part of the state with overnight temperatures dipping below -2.2°C (28.0°F), the citrus groves did not have major damage (Reuters). Several locations experienced record low temperatures, including Tallahassee, which dipped down to -10.0°C (14.0°F) on February 5. The previous record was set in 1996 when temperatures fell to -8.9°C (16.0°F) (National Weather Service).

On February 7, the United States and Canadian Coast Guards participated in a massive ice rescue operation of an estimated 145 ice-fishing enthusiasts. The danger began when warming temperatures caused an 8-mile wide ice floe to break off and float adrift, leaving the fishermen stranded on western Lake Erie. Several people were rescued from the water, including one man who was later confirmed dead (AFP).

A winter storm originating from the Pacific Ocean struck the United States western coast on February 16. The storm, which extended from the Mexican border up to Oregon, brought heavy rain and snow to parts of California, forcing the cancellation of the AT&T Pebble Beach National Pro-Am's (golf tournament) final round due to flooded greens. Major highways were temporarily closed as a result of the hazardous weather (Associated Press).

A winter storm affected parts of northern New England on February 23, forcing the cancellation of hundreds of schools and leaving 140,000 residents without power. The storm produced heavy snow accumulations of nearly 61 cm (2 feet) in some areas. The largest snowfall was reported in the town of Milo, northern Maine, which received 71.0 cm (2.3 feet) of snow (Associated Press).

NOAA National Centers for Environmental Information, State of the Climate: Global Hazards for February 2009, published online March 2009, retrieved on May 18, 2021 from https://www.ncdc.noaa.gov/sotc/hazards/200902.