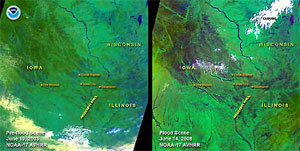 Comparison of pre-flood and
flood scene across Iowa


Nearly two weeks of heavy rainfall across the Midwestern U.S. produced historic floods across the area. Additional information can be found below.

In the United States, extreme drought conditions persisted across most of southern Texas and southern New Mexico. Exceptional drought conditions were present across the southern High Plains, and parts of North and South Carolina. Conditions slightly improved in western North Dakota, where drought conditions dropped from extreme to moderate, and in some parts to severe. As of June 24, 36% of the western U.S., 44% of the South, 17% of the High Plains, 61% of the Southeast, and 29% of the contiguous U.S. were in moderate to exceptional drought, according to the U.S. Drought Monitor. For a complete drought analysis across the United States, please see the U.S. drought page. 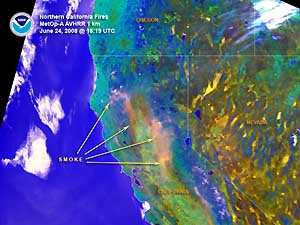 More than 800 severe wildfires, most sparked by lightning, charred parts of northern California by the last week of June (Associated Press). Thirty-two fires burned as much as 110,100 hectares (272,000 acres) of land (NIFC). For more information on June's wildfires, please visit the June 2008 Wildfire page.

While moderate to severe drought conditions were present across parts of northern China, torrential rains lashed southern China during June 7-18. These rains triggered flash floods and mudslides that killed a total of 57 people and caused $4 billion in economic losses (AFP/Reuters). The Guangdong province, the worst hit, was struck by the heaviest rainstorms in 5 decades, which claimed 20 lives, affected nearly 5.8 million people (Associated Press), and caused widespread floods that damaged hundreds of acres of crops and more than 140,000 houses (Reuters/BBC News/Associated Press). According to reports, 415 mm (16 inches) of rain fell in just 24 hours across parts of Guangdong from June 13-14. The heavy rain prompted the Xijiang and Wujiang rivers to surpass their flood levels by 6.8 meters (22 feet) and 18 meters (59 feet), respectively. The Hong Kong area was also affected by the storms, which unleashed flash floods and caused more than 40 landslides in the area (BBC News/Associated Press). It was reported that on June 7, Hong Kong received as much as 145.5 mm (5.73 inches) of rain in one hour, the highest rainfall ever recorded in an hour in Hong Kong (BBC News).

The heavy rain prompted by the storms and typhoon Fengshen across southern China made June 2008 the wettest month ever on record for Hong Kong, Guangzhou, and Macao since records began in 1884. For more information, please visit June's Global Analysis report.

Intense monsoon-related showers and thunderstorms brought widespread floods across parts of India during the first week of June, causing 25 fatalities and displacing 200,000 people in northeastern India (AFP). India's western state of Maharashtra received exceptionally heavy rainfall at the state's capital, Mumbai (Bombay). According to reports, this was the heaviest rainfall in seven years for Mumbai (Bombay) (BBC News).

Comparison of pre-flood and flood
scenes across Iowa

In the U.S., heavy rain fell across parts of the Midwest during the first two weeks of June, causing the worst floods in 15 years (Reuters) and numerous new record river crest levels that led to widespread flooding in the area. The worst hit state was Iowa, where 83 of its 99 counties were declared disaster areas (Reuters). According to reports, the heavy rainfall caused nine rivers across Iowa to be at or above the previous record flood levels (Associated Press). The floods affected 36,000 people and submerged millions of acres of land. It has been reported that Iowa's losses are estimated to be in the billions of dollars (Reuters). For more information, please visit June Midwest Flooding page. 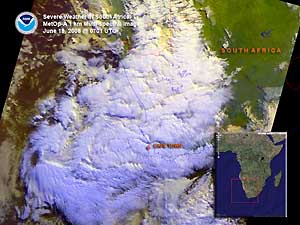 Heavy rainfall on June 19 prompted severe flooding and mudslides across parts of South Africa. The worst hit area was the eastern province of KwaZulu-Natal, where four people died. According to reports, Scottburgh, KwaZulu-Natal received a total of 128 mm (5 inches) of rain in just 24-hours, the highest rainfall amount for that day (BBC News).

January-May 2008 has been very active for tornadoes across the continental U.S., and the month of June was no different. During the first two weeks of June, numerous severe and tornadic storms formed across the central and eastern states of the contiguous U.S. These storms brought widespread floods, strong winds, hail, and more than 300 preliminary reports of tornadoes. The severe weather across the Midwest and Mid-Atlantic caused extensive blackouts, damaged many homes, and was responsible for 10 fatalities. The most deadly incident occurred on June 11 when a tornado struck a Boy Scout camp in western Iowa, killing 4 and injuring nearly 50 (CNN). Deadly twisters also impacted Kansas that day, killing two people and destroying or damaging 60 homes. Damages are estimated to be $20 million (Associated Press). For more information on tornadoes this season, please see the NCDC 2008 Tornado Season page.

In China, a severe storm produced a deadly tornado that affected the Anhui province on the 21st. The tornado destroyed 650 houses and damaged nearly 1,000. More than 20,000 people were affected, with 1 fatality and 45 injuries reported. According to reports, the tornado caused $2.7 million in losses (Reuters). 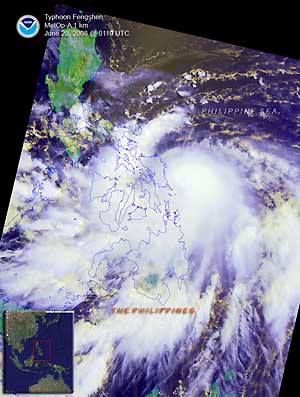 Typhoon Fengshen developed in the western Pacific Ocean, east of the Philippine Islands, on June 18. The storm strengthened to typhoon intensity by the 19th, but reached its peak intensity on the 20th with maximum sustained winds near 148 km/hr (92 mph or 80 knots). That same day, Fengshen made landfall in the eastern Philippine island of Samar (BBC News). The storm brought heavy rain and strong winds, causing widespread floods and landslides that left 224 people dead and 374 others missing (AFP). According to reports, the province of Iloilo received a total of 354 mm (14 inches) of rain in a 24-hour period on June 20 (BBC News). Fengshen slowly moved towards the northwest, lashing Manila on the 22nd. The ferocious storm also capsized a ferry, with 865 passengers and crew on board, near the Sibuyan Island. As of June 25, 48 passengers were found alive and nearly 60 corpses were found. It has been reported that this could be the Philippines' worst maritime disaster since 1987 (Reuters). The storm weakened to a tropical storm on the 23rd and, on June 25, Fengshen made a second landfall on China's southeastern coast. The storm killed nine people, destroyed over 1,200 homes, damaged crops (Associated Press), prompted the closure of schools, disrupted air traffic, and caused several landslides across the region (AFP/BBC News).

No reports of significant extratropical cyclones were received during June 2008.

No reports of significant winter weather were received during June 2008.

NOAA National Centers for Environmental Information, State of the Climate: Global Hazards for June 2008, published online July 2008, retrieved on May 18, 2021 from https://www.ncdc.noaa.gov/sotc/hazards/200806.