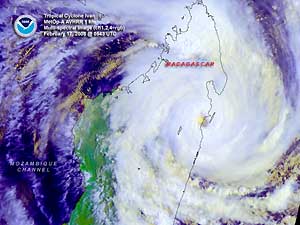 
Tropical cyclone Ivan made landfall in Madagascar on February 17. According to reports, Ivan was one of the largest cyclones ever to hit Madagascar (Reuters). Additional information can be found below.

Across the United States, moderate to exceptional drought conditions continued in the southeastern region, while much of the central and western U.S. experienced moderate to severe drought. Northern parts of North Dakota and northwestern Nebraska experienced extreme drought. On February 26, 37% of the western U.S., 66% of the Southeast, and 29% of the contiguous U.S. were in moderate to exceptional drought, according to the Federal U.S. Drought Monitor.

Drought across Spain is reportedly the worst in more than a decade, while Portugal suffers its worst winter drought since 1917. It is likely that water restrictions will be implemented this summer (BBC News).

Central and southern parts of Chile suffered from its worst drought in five decades. According to reports, more than a quarter of Chile's 345 municipalities faced water shortages. The government was forced to declare a state of emergency in 30 municipalities (Associated Press/BBC News). 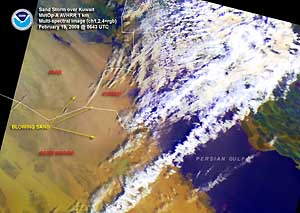 A dust storm affected Kuwait on the 19th, significantly reducing visibility and thus disrupting the local air traffic and forcing the closure of the Gulf's main ports. Dust storms are quite rare in the winter, but the lack of rainfall this winter prompted the loose sand to be easily transported by the strong shamal winds (BBC News).

Intense downpours fell during the first week of February in the Hawaiian islands, causing widespread floods and prompting several areas of the Big Island to be declared as disaster areas. On February 2, Hilo recorded a total of 275 mm (11 inches) in a period of 24 hours, breaking the previous record set in 1969 by 89 mm (3.5 inches) (BBC News).

Torrential rain fell on February 8 on the Pacific island nation of Tonga. According to reports, the Tonga Meteorological Office recorded a total of 184 mm (7.2 inches) of rain in a six-hour period, almost a typical month's worth of rain. The heavy rain prompted flash floods in many low-lying areas (BBC News).

In New Zealand, heavy rain triggered flash floods and landslides when 120 mm (5 inches) of rain fell overnight on the 11th. According to reports, this is the first significant rain event since October 2007 (BBC News).

Heavy rain during February caused widespread floods across Bolivia, Ecuador, and Argentina. Thousands of people were left homeless and nearly 50 people were killed (AFP). In Ecuador, these floods are described as the worst in the country's history (Associated Press). According to reports, Bolivia and Ecuador's government declared a national state of emergency (BBC News/Associated Press).

Flooding and landslides triggered by heavy rain affected the eastern parts of the Philippines during February 14-27. More than 294,000 people were affected and many houses were submerged. There were 45 fatalities with 31 others injured (AFP). According to reports, economic losses for the central and southern Philippines were estimated to be $22 million in infrastructure and agricultural damages (AFP).

Heavy rain that fell during February 20-26 caused widespread floods across Kazakhstan, resulting in one death. About 12,700 people evacuated their homes and a total of 2,000 homes were destroyed (Reuters).

Storm damage across the South

A major outbreak of severe weather and tornadoes occurred overnight on February 5 (Super Tuesday) across the southeastern U.S. and the Ohio Valley region. There were 131 reported tornadoes on the 5th, along with many reports of hail and wind damage. These storms caused widespread damage across Arkansas, Alabama, Kentucky, Tennessee, and Mississippi. Two of the 5 affected states (Arkansas and Tennessee) were participating in the "Super Tuesday" election event, but some locations were forced to close early due to the severe weather . For the second time during the 2007/2008 winter, devastating tornadoes struck the U.S. and caused 57 fatalities. This was one of the 15 worst tornado death tolls since 1950 and the deadliest tornado outbreak since the 31 May 1985 outbreak where 76 people lost their lives across Ohio and Pennsylvania (Associated Press/Reuters). In Alabama, 5 people died and around 500 homes were damaged. Arkansas had at least 13 fatalities with 133 injured people. This was Arkansas's deadliest event since 1 March 1997, when 25 people were killed. Also, Arkansas recorded a tornado that tracked 123 miles, the longest recorded tornado track since 1951. Kentucky reported 7 fatalities and Mississippi had at least 18 reports on injured people. Meanwhile, Tennessee had 32 fatalities and suffered the deadliest tornado outbreak since 1974, when 47 people died (Associated Press/Reuters/AFP). According to reports, Madison County in Tennessee suffered an estimated $47 million in property damages (Reuters).

Across the southern U.S., a second round of severe storms swept through on the 17th, producing 49 reported tornadoes, damaging winds, and hail. In Alabama and in the Florida Panhandle, many homes were completely destroyed with many others severely damaged. Although there were no reported fatalities, there were nearly 50 people injured (Associated Press).

Elsewhere, thunderstorms ripped through the eastern parts of New South Wales and Queensland on the 7th. Winds gusting over 90 km/hr (55 mph or 50 knots) brought down trees on houses, power lines and roads. The city of Perth, Western Australia had its wettest February since 1992 when more than 40 mm (1.6 inches) of heavy rain fell and caused a 50 day drought to end (BBC News).

Severe thunderstorms, described as a one in 20 year event, affected parts of New South Wales on the 26th, producing torrential rain, golf ball size hail, and damaging winds. According to reports, flash floods were caused when as much as a months worth of rain fell in less than an hour (BBC News). Across Sydney, some regions received as much as 17 mm (0.7 inches) of rain in just 15 minutes while other places had as much as 44 mm (1.7) in just 30 minutes (BBC News).

Tropical cyclone Ivan developed as a tropical depression northeast of the island of Madagascar on the 7th. As it moved closer to the island of Madagascar, Ivan attained intense tropical storm strength on the 16th with maximum sustained winds near 213 km/hr (132 mph or 115 knots). Ivan made landfall on Madagascar on the 17th, where it rapidly weakened due to the rugged terrain of the island. There were more than 320,000 people affected and 83 fatalities with 117 others missing (Associated Press). According to reports, Ivan was one of the largest cyclones ever to hit Madagascar (Reuters).

No reports of significant extratropical cyclones were received during February 2008.

In the United States, International Falls in Minnesota experienced a new record low for February 11 when temperatures plummeted to -40°F. The previous record was set in 1967, when temperatures fell to -37°F (Associated Press).

Across Greece and Turkey, cold weather and heavy snowfall caused school and transportation disruptions on the 18th. In Turkey, the severe weather was responsible for hundreds of traffic accidents across the country and for taking the lives of two people who froze to death (Reuters).

Heavy snow and cold temperatures affected China's southwestern province of Yunnan for a second time since January 2008. According to reports, about 180,000 people were affected when snow blocked roads and caused blackouts (Reuters).

In Jerusalem, the second major winter storm this winter brought heavy snowfall on the 18th. The storm lashed the country with heavy snow, hail, rain, and strong winds. According to reports, 50 mm (2 inches) of snow lay in parts of the country (BBC News).