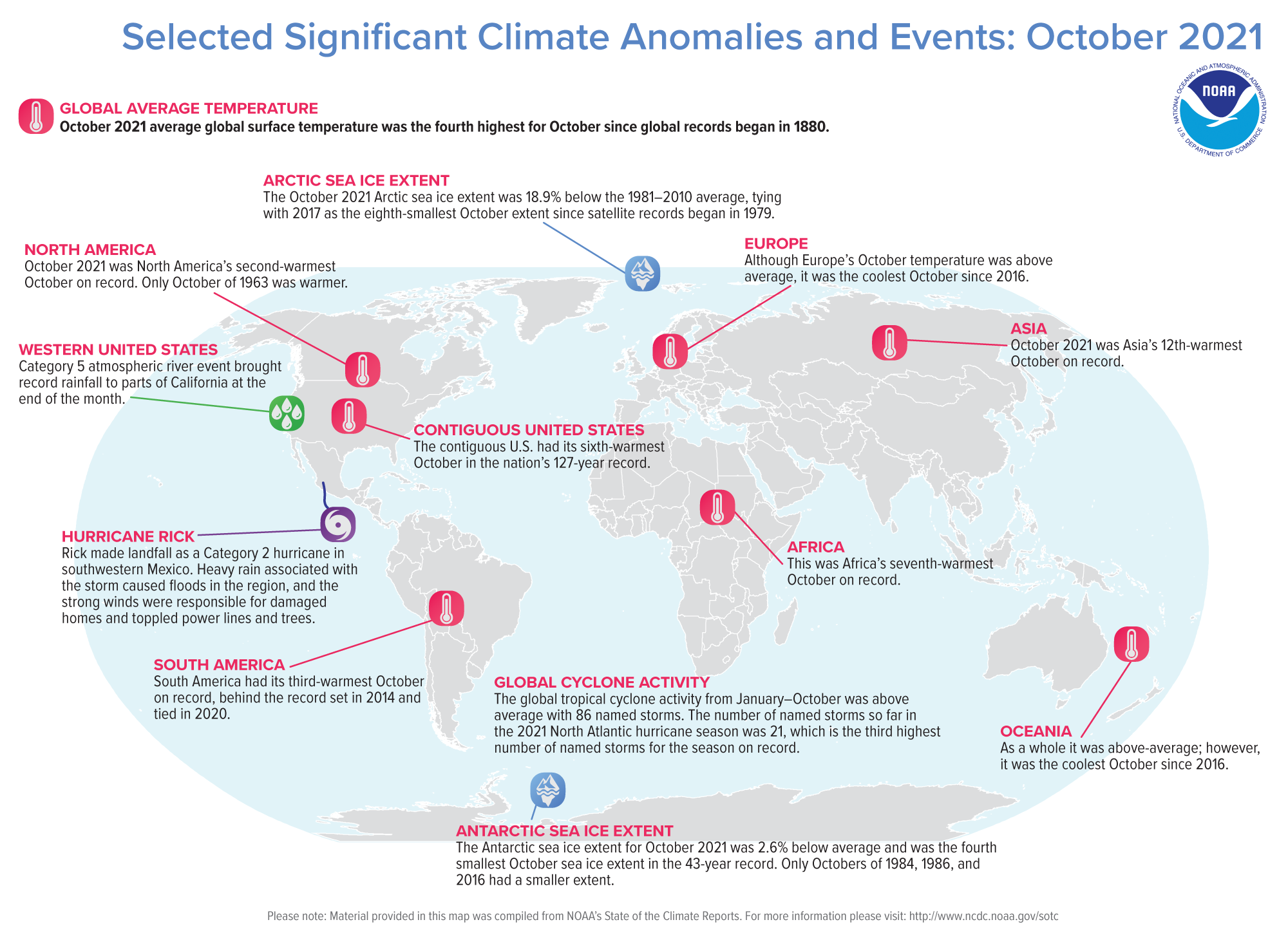 In the atmosphere, 500-millibar height pressure anomalies correlate well with temperatures at the Earth's surface. The average position of the upper-level ridges of high pressure and troughs of low pressure—depicted by positive and negative 500-millibar height anomalies on the October 2021 map, is generally reflected by areas of positive and negative temperature anomalies at the surface, respectively.

Temperature anomalies and percentiles are shown on the gridded maps below. The anomaly map below on the left is a product of a merged land surface temperature (Global Historical Climatology Network, GHCN) and sea surface temperature (ERSST version 5) anomaly analysis. Temperature anomalies for land and ocean are analyzed separately and then merged to form the global analysis. For more information, please visit NCEI's Global Surface Temperature Anomalies page. The percentile map below on the right provides additional information by placing the temperature anomaly observed for a specific place and time period into historical perspective, showing how the most current month, season or year compares with the past.

The month of October was characterized by much-warmer-than-average temperatures across much of North, Central, and South America, Africa, northern Europe, and across parts of southern and eastern Asia, the Atlantic, western and southern Pacific, and Indian oceans. Parts of North America, north-central Russia, northern Pacific Ocean, as well as parts of the Antarctic Ocean had the most notable high temperature departures of 2.5°C (4.5°F) above average or higher. Record-warm October temperatures were present across parts of North America, South America, northern Africa, southern Asia, as well as across parts of the Atlantic and the Pacific oceans. Overall, this encompassed about 8.24% of the world's surface with record warm October temperature — the second highest October percentage since records began in 1951. Only October of 2015 had a higher percentage at 19.43%. 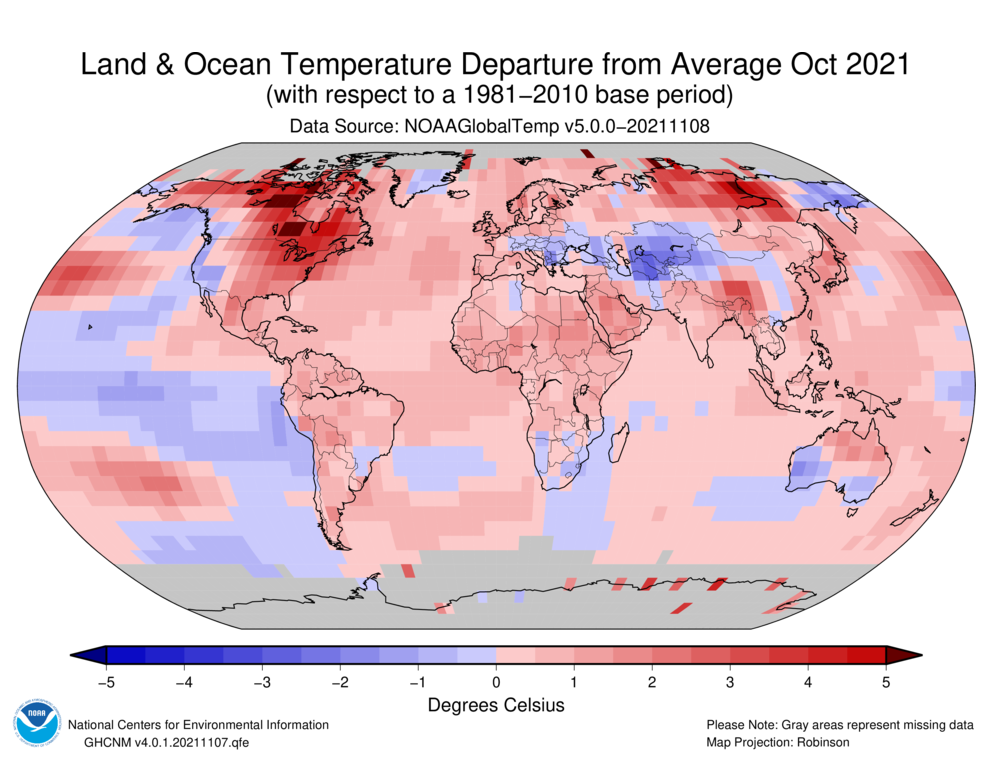 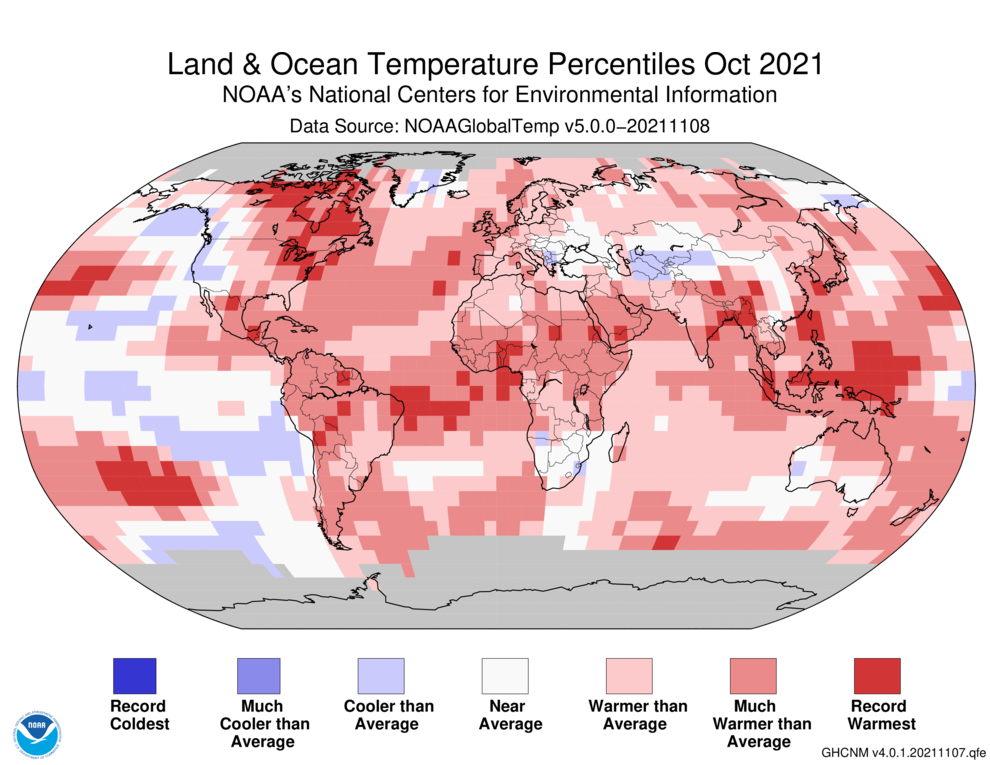 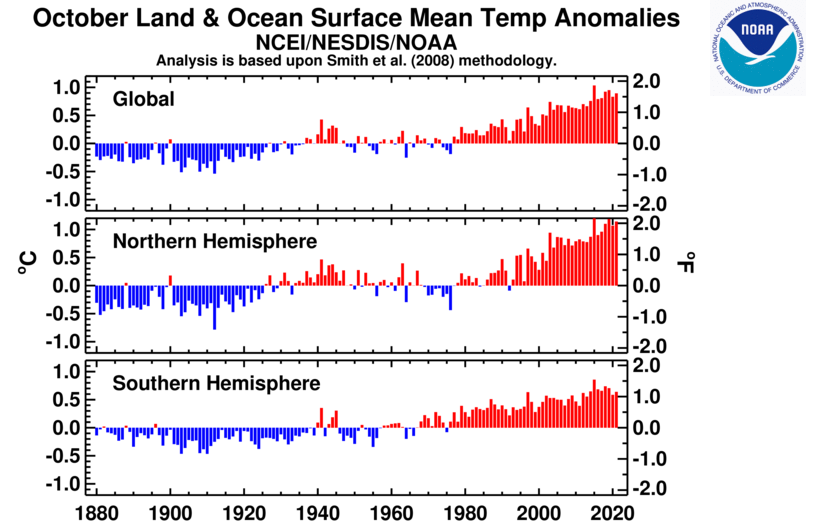 The January–October 2021 global surface temperature was 0.84°C (1.51°F) above average and the sixth highest such period in the 142-year record. Looking ahead, the year is virtually certain to rank among the ten warmest years on record, with the highest probability of ranking as the sixth warmest year on record. 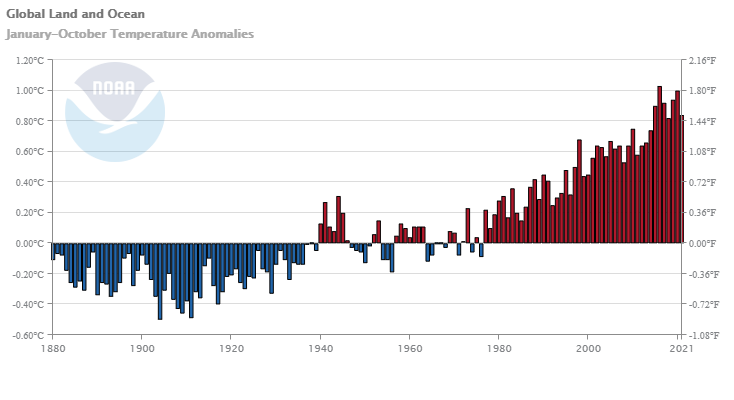 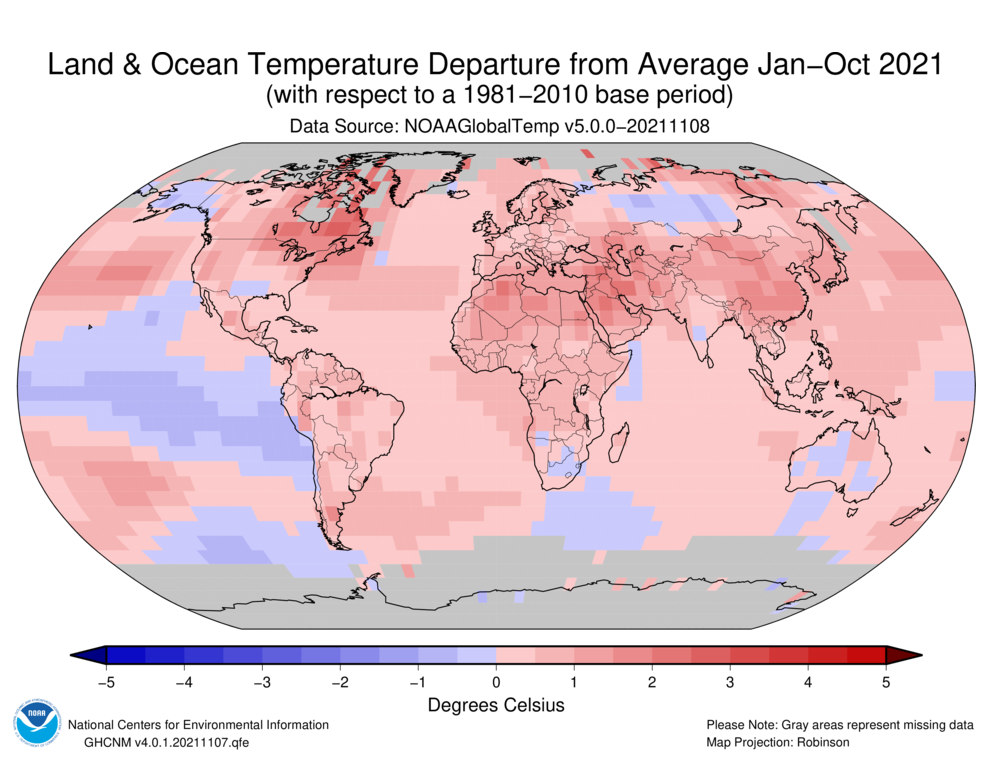 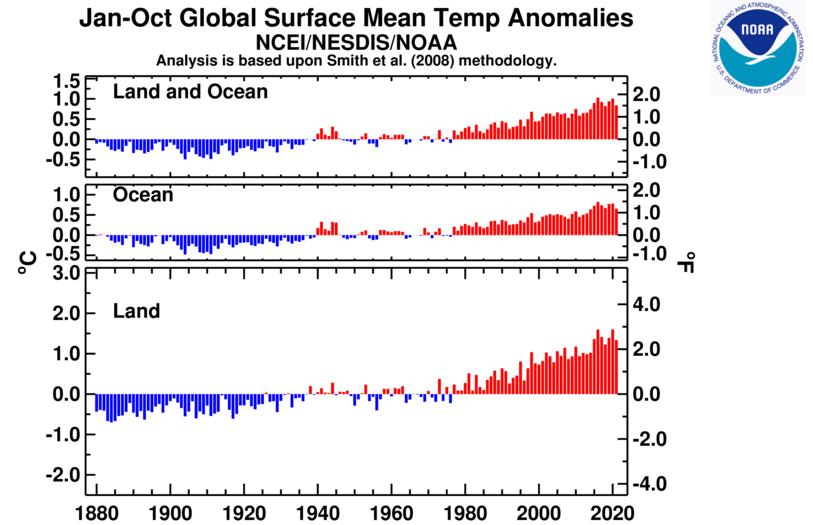 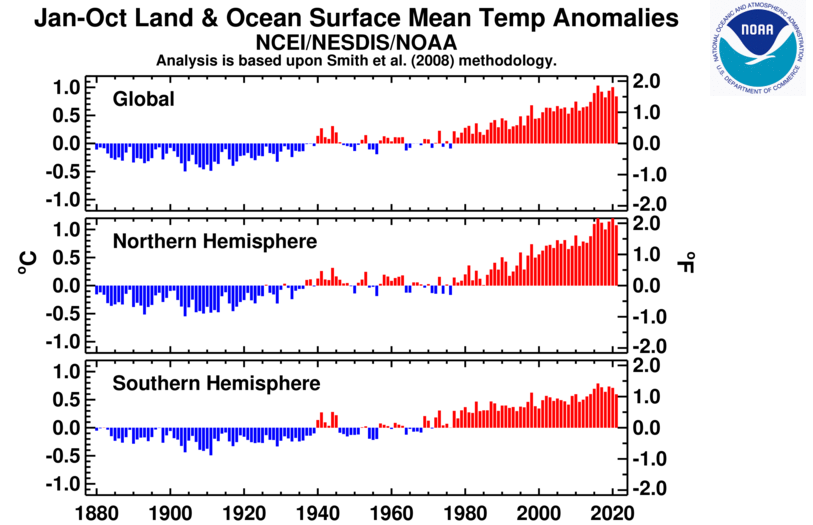 The maps shown below represent anomalies (left, using a base period of 1961–1990) and percent of normal (right, using the same base period) based on the GHCN dataset of land surface stations. As is typical, precipitation anomalies during October 2021 varied significantly around the world. 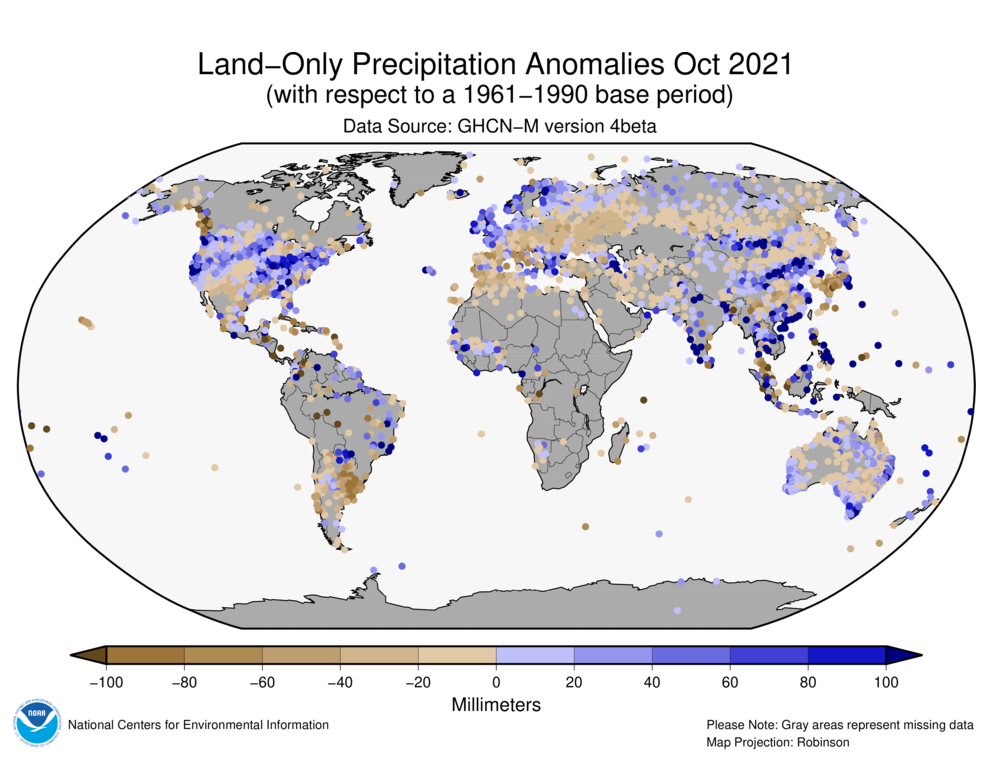 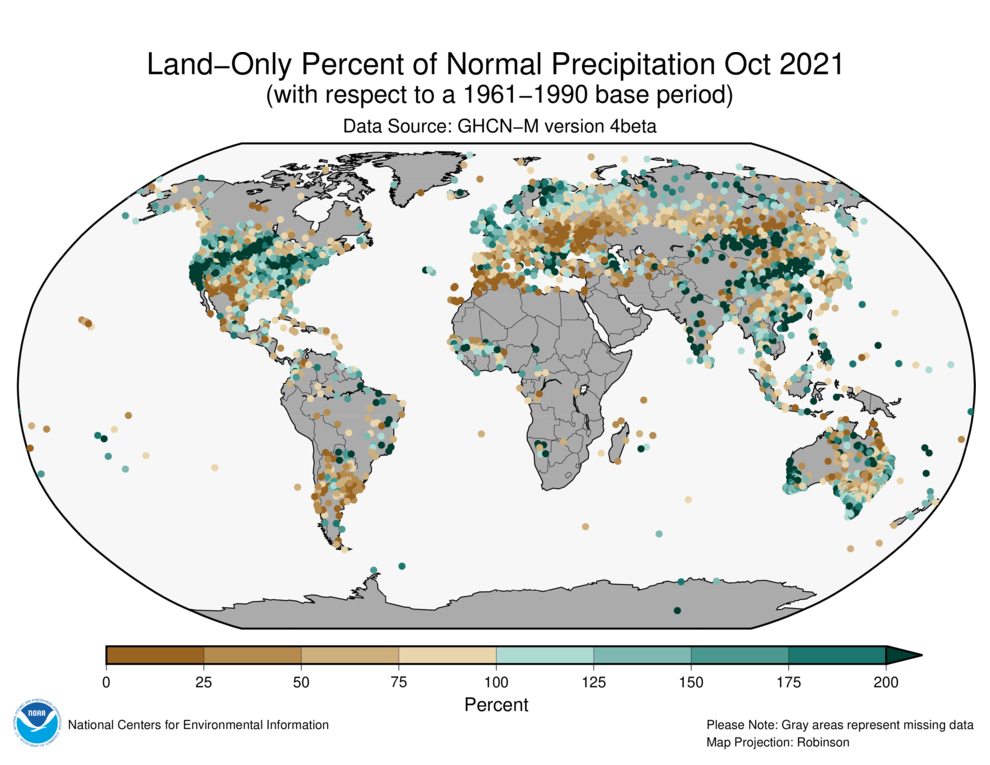 Much of Austria had drier-than-average conditions during the month. The nation as a whole had 47% below-average precipitation in October, which is the driest October since 2005. Meanwhile, Norway had 50% above-average precipitation during October 2021, resulting in the nation's third wettest October since national records began in 1900. Only Octobers of 1983 and 1987 had a wetter October.

According to the World Meteorological Organization, parts of northeastern Libya were affected by strong winds and heavy rain that prompted flash floods at the end of the month. The floods damaged homes and washed away cars.

Hong Kong had very wet conditions during October 2021, receiving over six times the monthly normal of 100.9 mm (4.0 inches). The heavy rain can be attributed to the tropical cyclones Lionrock and Kompasu. Overall, this was Hong Kong's second wettest October on record.

In early October, copious amounts of rain fell across northern Italy, causing floods and landslides. It was reported that Liguria (northwestern Italy) had received 181 mm (7.1 inches) in one hour and over 900 mm (35.4 inches) in a 24-hour period. A medicane, which is similar to a tropical cyclone located in the Mediterranean, brought torrential rain to parts of Algeria, Tunisia, and southern Italy at the end of the month. The heavy rain prompted severe floods and damaged over 100 homes. 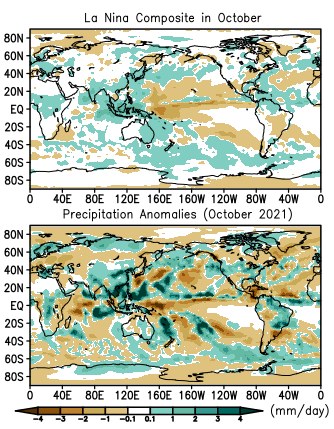 October is a transition month between the seasonal extremes in each hemisphere with the most obvious shifts toward the south in rainfall patterns in the Asian monsoon, the ITCZ across the Pacific and Atlantic Oceans and across Africa and South America (see top panel in Fig. 1). Tropical cyclones in Northern Hemisphere oceans were also decreasing, especially in the Atlantic. SSTs in the central Pacific along the Equator continued to decrease in October indicating a strengthening of La Niña conditions that affected the rainfall patterns for this month.

Although the Asian monsoon rains are in general retreating southward this month, the anomaly fields in Fig. 1 (middle and bottom panels) show various areas of more intense rainfall than the climatological mean for this month. Many of these features match with flood events this month across northern China, Indochina and the Philippine Islands, for example. Some of these features are related to tropical cyclones. Further west smaller features at the southern tip of India and westward are associated with Tropical Cyclone Shahan-Gulab which brought floods to southwest India and then traversed the northern Arabian Sea and even hit Oman on the northeast tip of the Arabian Peninsula, with rare flooding there.

As mentioned before La Niña plays a role this month in regional rainfall distribution, especially in the Pacific-Indian Ocean region. Fig. 2 shows a La Niña composite of rainfall anomalies for October and a repeat of this month's anomaly map. As expected in a La Niña, and shown in the composite, the central Pacific has a rainfall deficit strung out along the Equator, with this month's anomaly map showing a narrow, East-West positive anomaly just to the north below Hawaii, which is also in the composite. This arrangement of the features indicates a northward shift of the ITCZ. Both maps in Fig. 2 also show a negative feature just east of New Guinea and the expected general positive anomaly over the Maritime Continent as a whole and extending into the eastern Indian Ocean. Further afield the La Niña effect can be discerned somewhat more weakly in the far eastern Pacific in the deep tropics, with an extension into Mexico and the southwest U.S. and northern South America.

Although parts of the southwest U.S. are still having drought conditions continuing through October, the mid-latitude storm track across the northern Pacific Ocean intersected the U.S. west coast at northern California and further north with heavy rainfall and mountain snowfall (see Fig. 1) associated with Atmospheric Rivers (AR), ameliorating the drought there, ending the fire season, but resulting in flooding and landslides, especially in California. The positive anomaly feature extends from the eastern Pacific across the northern states and covers most of the eastern states also. In the tropical Atlantic negative rain anomalies extend from the Caribbean to near Africa associated with a relative dearth of tropical cyclogenesis along that band, perhaps related to the southward shift of the ITCZ there.

In Europe, the precipitation deficit evident from Spain through central Europe into Russia helped to maintain the drought conditions over most of this area. To the south a distinctive positive anomaly over the central Mediterranean Sea is associated with a sequence of events, including a "Medicane", a tropical cyclone-like storm which traversed the Mediterranean from west to east and ravaged Sicily. Other storms also added to the positive anomaly feature and flood events in Greece and northern Italy.

In Africa a positive anomaly in October near the Horn of Africa is associated with heavy rains over the last few months which has led to major flooding in South Sudan. More abundant rainfall over northern South America has lessened the drought over parts thereof, while the precipitation deficit in the southern portion of the continent has added to drought conditions there.