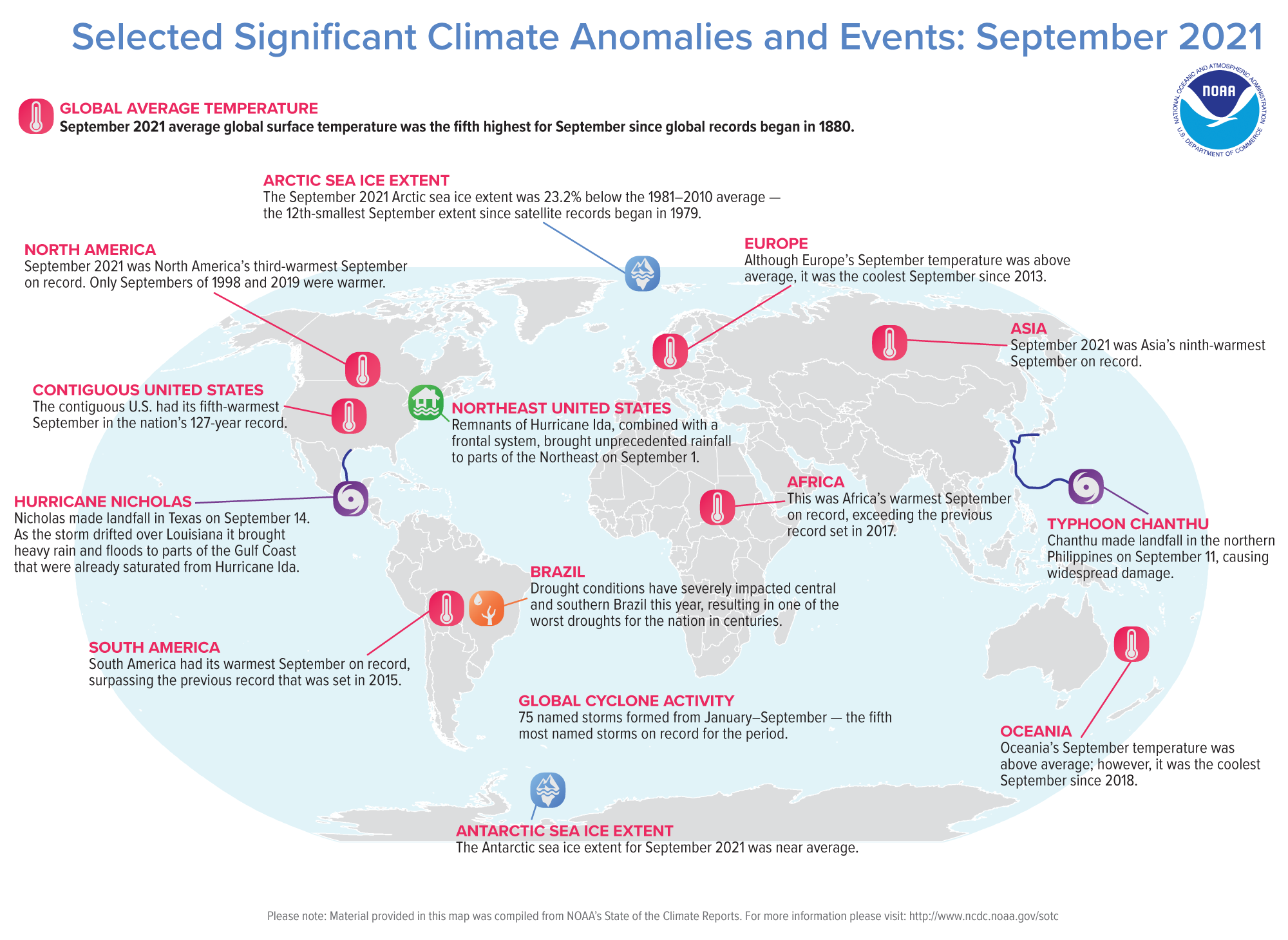 In the atmosphere, 500-millibar height pressure anomalies correlate well with temperatures at the Earth's surface. The average position of the upper-level ridges of high pressure and troughs of low pressure—depicted by positive and negative 500-millibar height anomalies on the September 2021 map, is generally reflected by areas of positive and negative temperature anomalies at the surface, respectively. 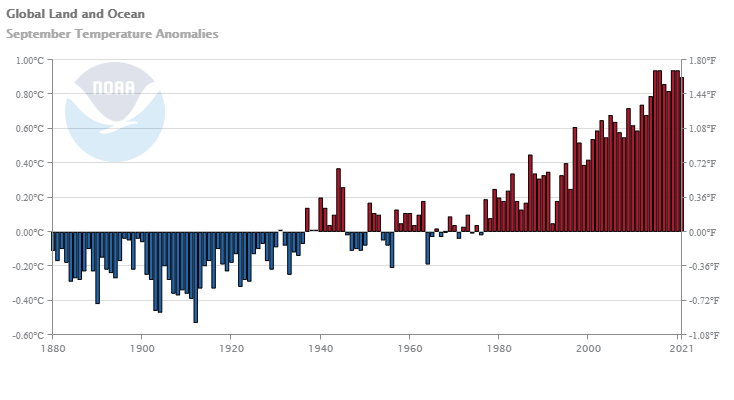 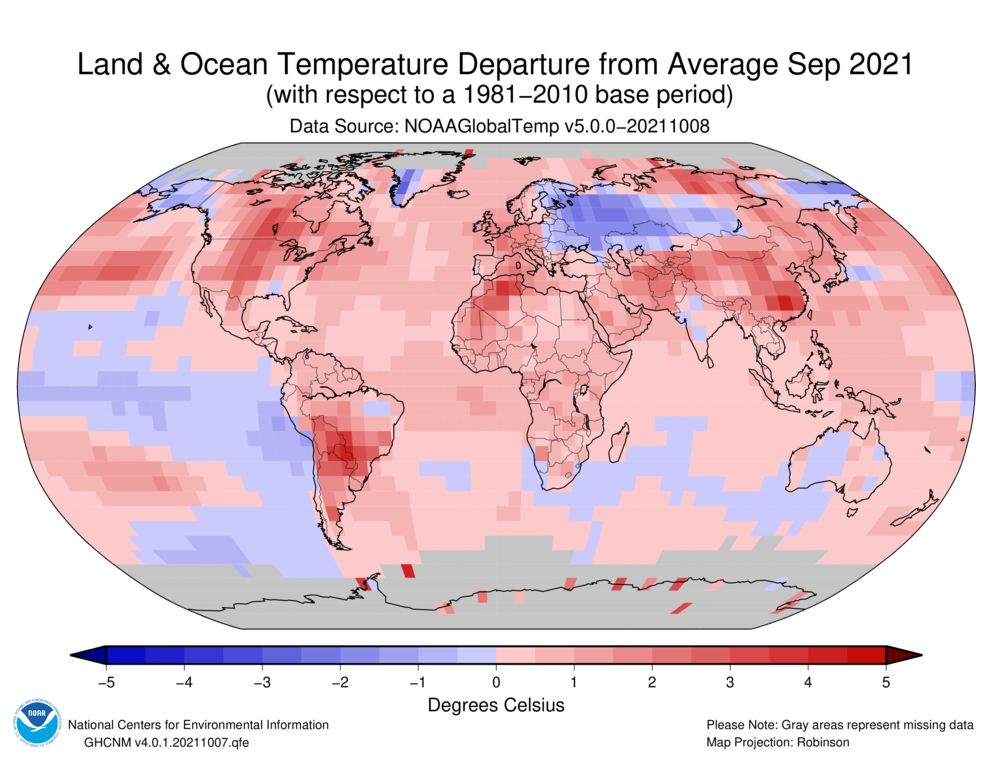 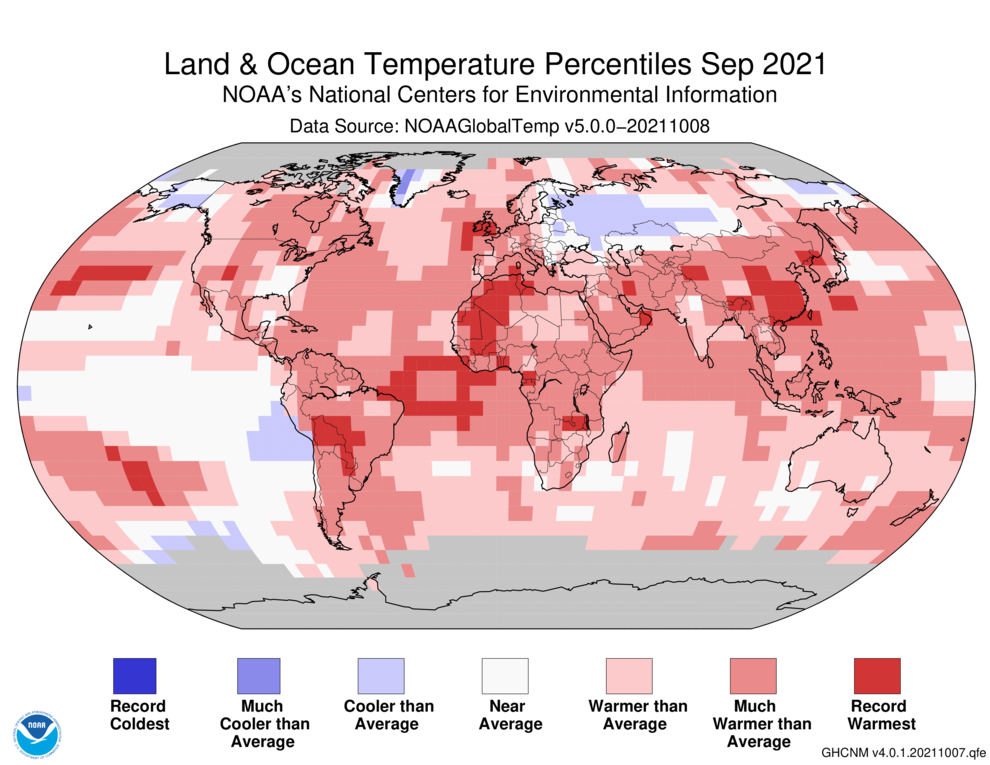 North America's September 2021 temperature departure of +1.58°C (2.84°F) was the third highest for North America on record, behind Septembers of 1998 and 2019. The contiguous U.S. had its fifth warmest September on record.

The Netherlands had its seventh warmest September on record at 1.2°C (2.2°F) above average.

According to Meteo France, maximum (daytime) temperatures rose to 33.4°C (92.1°F) on September 13 — the highest maximum temperature for France in September since records began 1947.

Oceania also had an above-average September temperature. However, it was the coolest since 2018. During September 2021, Australia had above-average temperatures, resulting in a national mean temperature of 1.01°C (1.82°F) above the 1961–1990 average. This was the 24th warmest September in the nation's 112-year record. 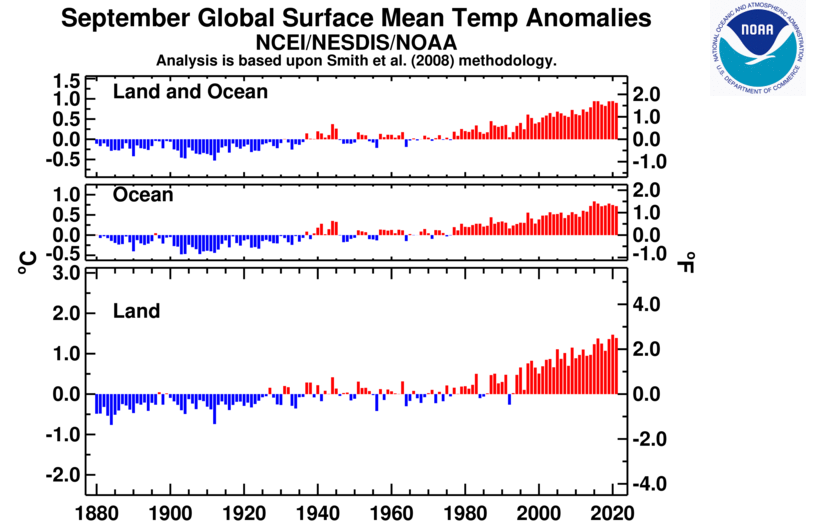 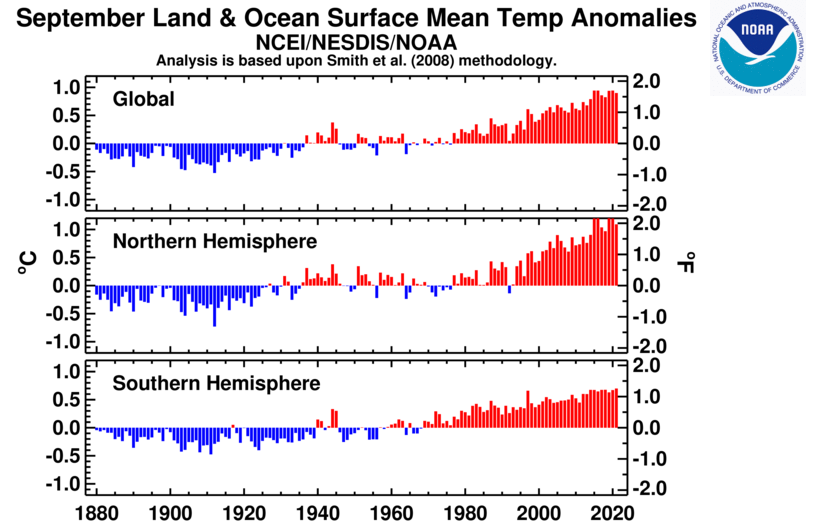 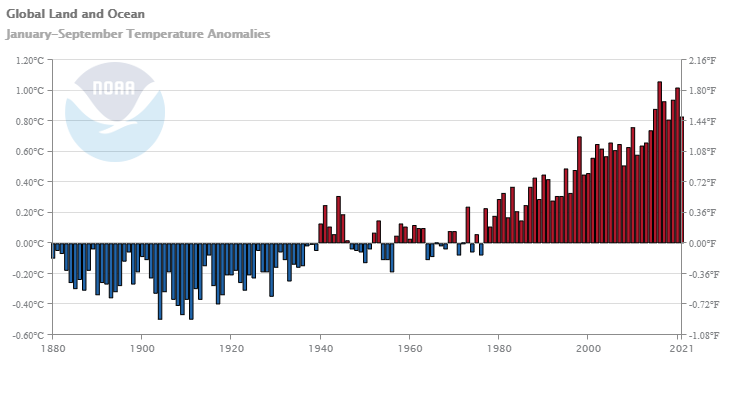 The first nine months of the year were characterized by warmer-than-average conditions across much of the globe. Temperatures were much warmer than average across parts of North, Central and South America, Africa, western Europe, southern Asia, as well as parts of the Atlantic, Indian, and northern and western Pacific oceans. Record-warm January–September temperatures were observed across parts of the Pacific Ocean, northern Africa, and southern Asia. Cooler-than-average conditions were limited to tropical central and eastern Pacific Ocean and the south-central contiguous U.S. However, no land or ocean areas had a record-cold January–September. 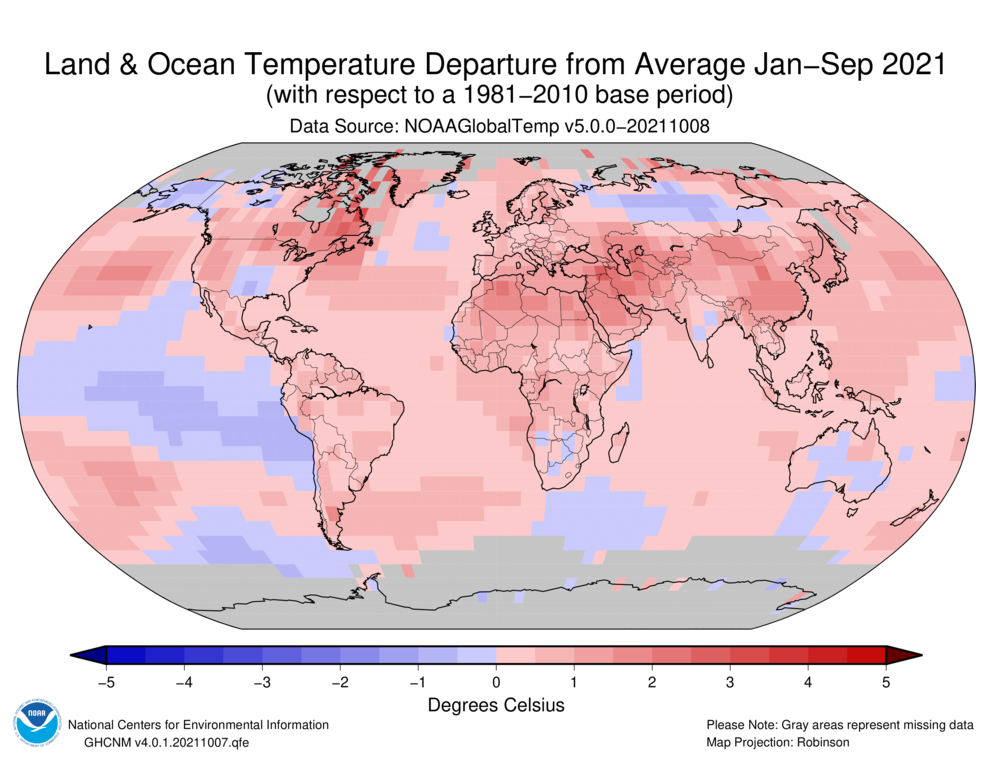 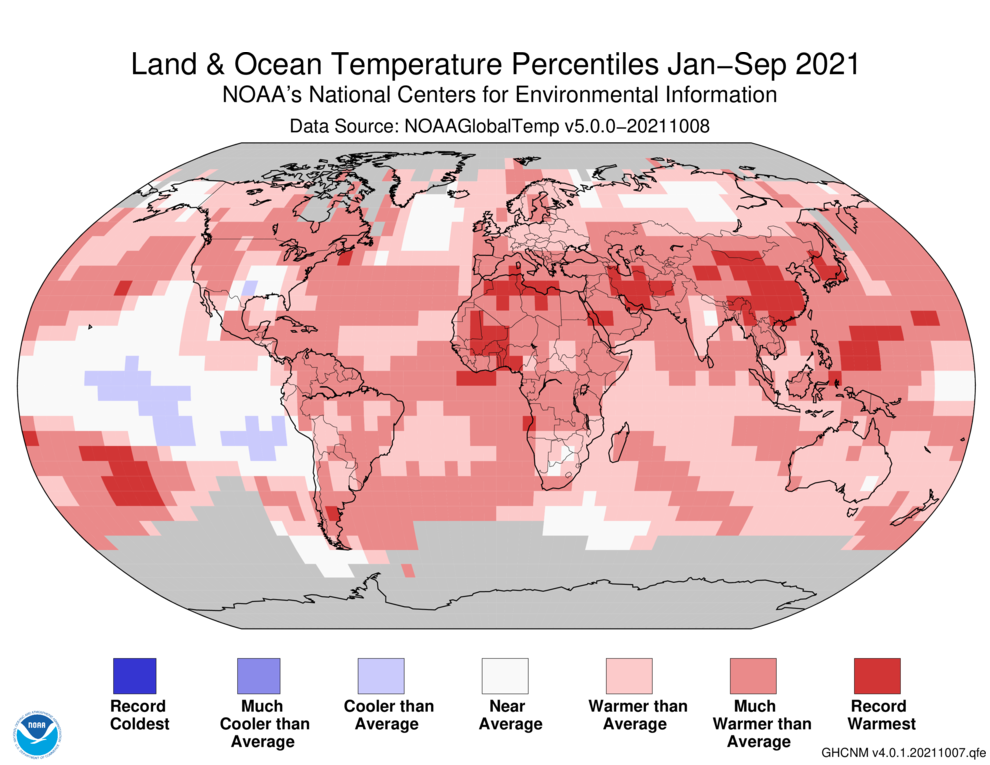 According to our continental analysis, North America, South America, Africa, and Asia had a top eight warm January–September on record. Of note, Africa had its third warmest year-to-date, behind 2010 (warmest) and 2016 (second warmest). Although Oceania and Europe had an above-average January–September temperature, it was their coolest such period since 2012 and 2013, respectively. 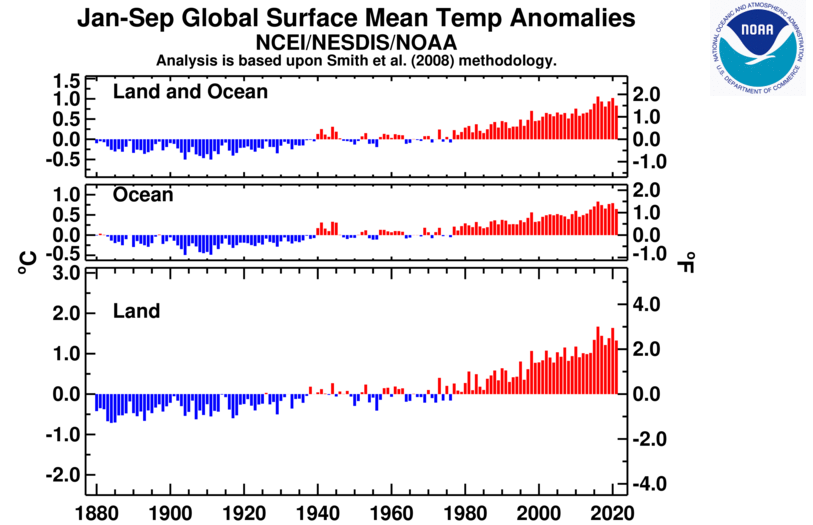 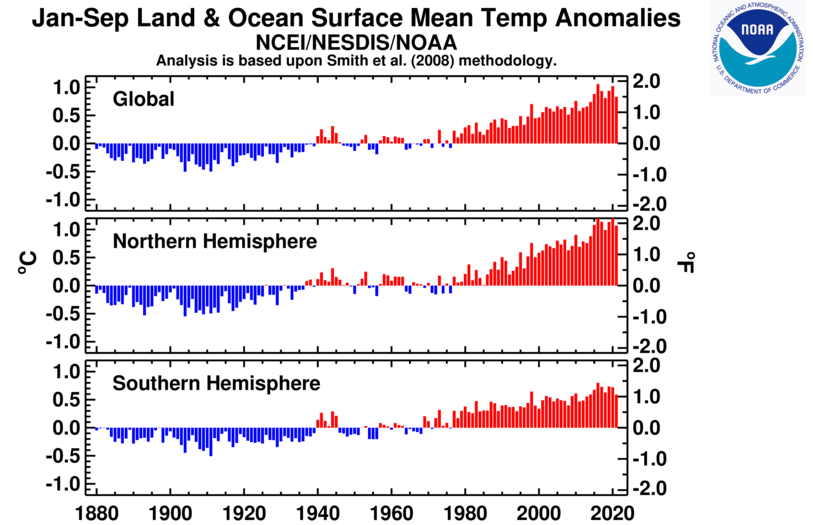 The maps shown below represent anomalies (left, using a base period of 1961–1990) and percent of normal (right, using the same base period) based on the GHCN dataset of land surface stations. As is typical, precipitation anomalies during September 2021 varied significantly around the world. 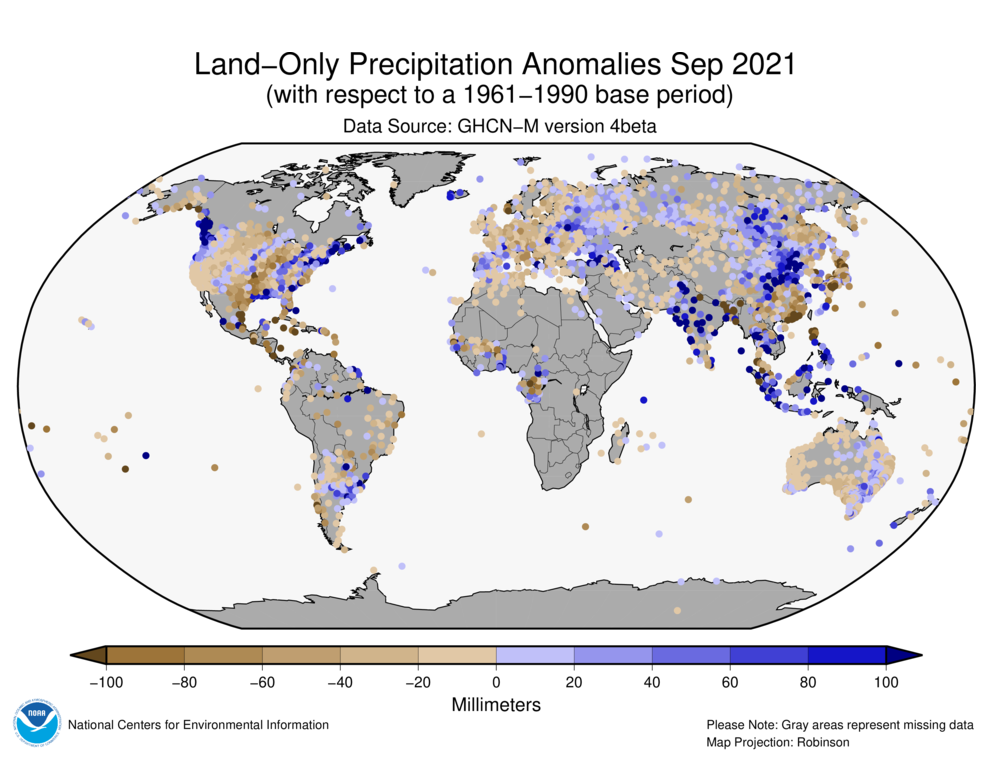 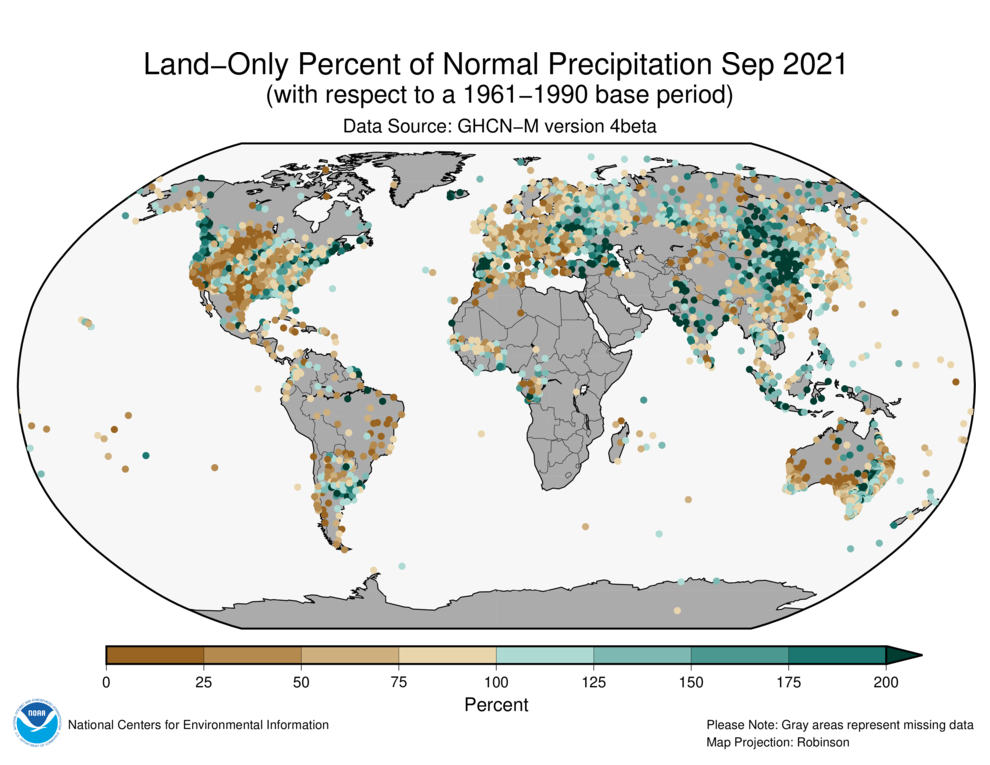 Significantly below-average precipitation occurred across from the southwestern contiguous U.S. to parts of the northern Great Plains, as well as parts of Texas to parts of the Midwest. Southeastern Brazil, southern Chile and southern Argentina, parts of central and northern Europe, southern Australia, and parts of Asia were also drier than normal. Significantly above-average precipitation occurred in the northwestern and northeastern contiguous U.S., northern Argentina, Spain, western, southern and eastern parts of Asia, and southeastern Australia.

In early September, two separate events of heavy rain fell across parts of central Mexico, causing the overflow of rivers and streams and triggering dangerous floods. According to reports, over 500 homes were damaged.

Typhoon Conson was an equivalent Category 1 hurricane in the Saffir-Simpson scale at its strongest intensity. Conson made landfall across central Philippines on September 6, bringing strong winds and heavy rain that prompted floods in low-lying communities. A few days later, Typhoon Chanthu, an equivalent Category 5 hurricane in the Saffir-Simpson scale, made landfall on the Batanes Islands, northern Philippines, on September 11. Chanthu was responsible for destroying infrastructures across the Batanes Islands, as well as toppling poles and trees, causing power outages. Chanthu also affected Taiwan, with torrential rains and strong storm surges of up to 7 m (23 feet).

In the North Indian Basin, Cyclone Gulab made landfall in southeastern India on September 26. Gulab brought torrential rains to parts of India, causing significant damages, such as toppling power lines, flooding roads, and damaging homes. By September 28, Gulab weakened significantly over land. However, once it reemerged in the Arabian Sea, the system strengthened once again, reaching an equivalent Category 1 hurricane intensity. Gulab made landfall on Oman on October 3, prompting dangerous floods.

Drought conditions have severely impacted central and southern Brazil this year, resulting in one of the worst droughts for the nation in centuries. According to reports, the lack of rain has resulted in water scarcity, increased fire activity, and crop losses. The rainfall deficit also impacted the energy sector since hydroelectric reservoirs are low or empty, prompting the Brazilian government to encourage its residents to consume less energy. On September 27, strong winds caused a dust storm over San Pablo, reducing visibility drastically. 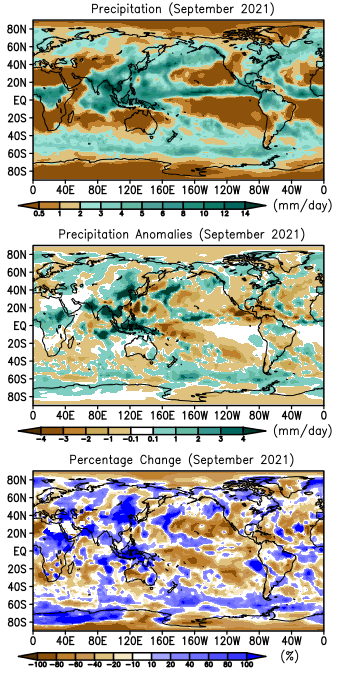 The global precipitation map for September 2021(Fig. 1, top panel) is dominated by the rainfall of the summer monsoon over East Asia and the other large-scale features of the season, but one can also detect relatively narrow swaths of precipitation in the North Pacific and North Atlantic associated with the tracks of tropical cyclones. These open ocean tracks are even more prominent in the anomaly maps (magnitude and percentage in the middle and bottom panels of Fig. 1). However, from the middle panel figure it is clear that the summer Asian monsoon, climatologically the strongest precipitation feature on the planet, was particularly intense in September, with above average rainfall over most of South Asia, China and the Maritime Continent. The strong monsoon, with imbedded tropical cyclones, produced intense rain events across the region with flooding in northeast China, Indonesia, Indochina and western India and Pakistan. Looking back over the last few months and even the last year, this above average precipitation pattern in East Asia has been a general feature.

The El Niño-Southern Oscillation (ENSO) SST conditions in the tropical central Pacific are near neutral (slightly toward the La Niña side). The overall pattern of precipitation anomalies in the deep tropics reflect the absence of this effect, although the intense rainfall over the Maritime Continent is typical of La Niña conditions.

Over Africa the usual ITCZ feature shows above average rainfall, with a large positive anomaly over eastern part of the continent, which resulted in significant flooding in Sudan and surrounding areas, in the midst of political difficulties. Australia has remained mainly dry, although the southeast portion of the country shows above average precipitation this month. The circumpolar rainband in the Southern Hemisphere at 50–60°S has above average values over most of this feature.

Over North America the very general pattern of negative anomalies in the western portion and positive anomalies in the east continues in September. The drier than normal zone in the west is an extension of the larger feature in the anomaly maps across most of the subtropical Pacific, with a more intense than normal mid-latitude precipitation feature extending from Asia into the North America coastal areas. The North American monsoon weakened in September and did not provide relief this month in the southwest U.S. The Gulf of Mexico had some tropical cyclone activity that affected parts of Texas, Louisiana and even flooding in New York City at the beginning of the month.

Floods in Spain and southern France are related to positive rainfall anomalies there. Positive precipitation anomalies are evident across the northern edge of Eurasia and across parts of northern Alaska and Canada, perhaps related to generally warm temperatures at these latitudes and associated abundant moisture.