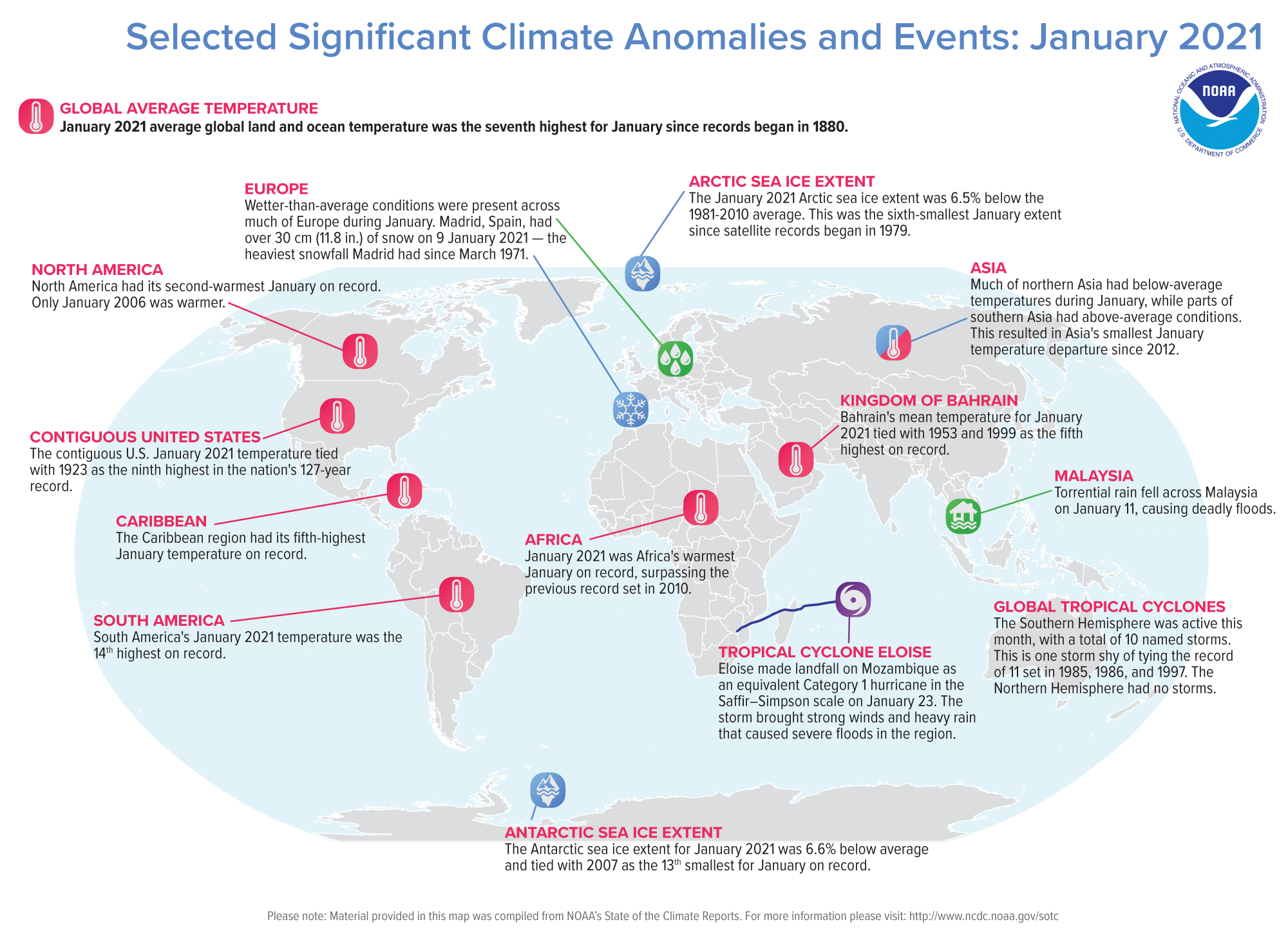 In the atmosphere, 500-millibar height pressure anomalies correlate well with temperatures at the Earth's surface. The average position of the upper-level ridges of high pressure and troughs of low pressure—depicted by positive and negative 500-millibar height anomalies on the January 2021 map—is generally reflected by areas of positive and negative temperature anomalies at the surface, respectively. 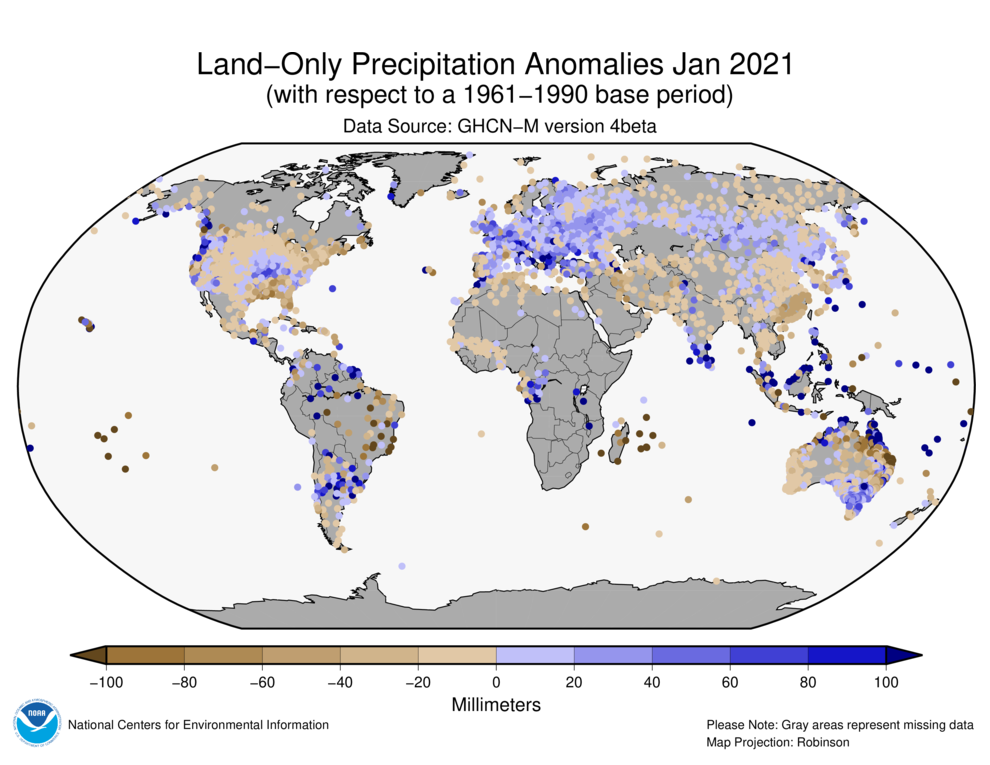 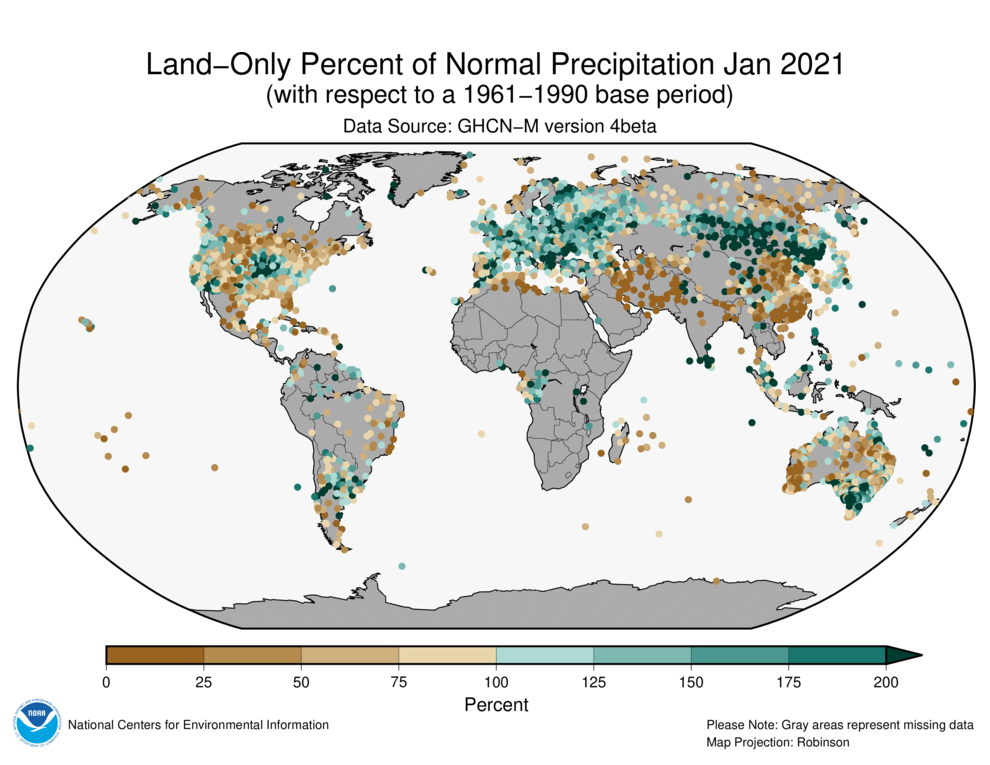 As is typical, precipitation anomalies during January 2021 varied significantly around the world. January precipitation was generally drier than normal across parts of the northern contiguous U.S., as well as across the Rocky Mountains and the southeastern U.S, Mexico, eastern Brazil, northern Russia, southern parts of Asia, and western and northeastern Australia. Wetter-than-normal conditions were notable across the central contiguous U.S., northern South America, northern Argentina, much of Europe, southwestern Russia, and southeastern Australia. 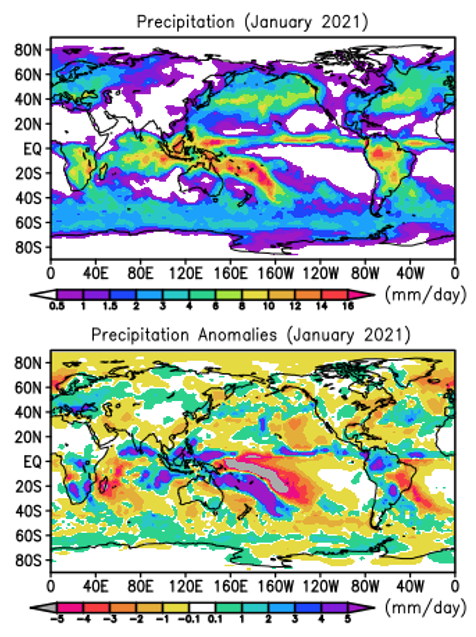 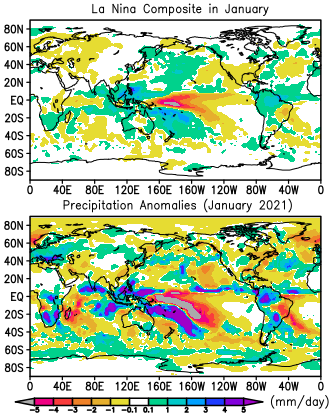 Deep into the Northern Hemisphere winter the climatological precipitation features have moved furthest south for the year as can be seen in Fig. 1 (top panel) over Africa and South America and off South Asia and into the Indian ocean, Maritime Continent and northern Australia. The ITCZ is also at its most southern position across the Pacific and Atlantic Oceans. The mid-latitude storm tracks and their accompanying precipitation maxima are furthest south.

The anomaly pattern (Fig. 1, bottom panel) shows strong, dramatic features of excesses and deficits of precipitation across the tropics, over both land and ocean. For this January the tropical ocean-atmosphere system is still in a La Niña phase of ENSO, with negative SST anomalies over the central Pacific along the Equator, although the La Niña SST index has weakened slightly from December. La Niña explains many, but not all, of the precipitation anomaly features in the tropics, as can be seen in Fig. 2, showing a La Niña composite for Januarys (top panel) over the full period of GPCP (1979–2020) and a repeat of the January 2021 anomalies from Fig. 1. Between the two panels in Fig. 2 there is a positive correlation in the location of features of the same sign, with greater intensity for the January 2021 features as compared to the composite. In the central Pacific the negative feature for this January is very similar in shape to the composite. The same is true in general for the positive rainfall anomaly over the Maritime Continent, which is related to heavy rain events and floods during the month over Indonesia and Malaysia.

The Indian Ocean features, at least in the eastern half, also show the marks of the La Niña, including connections to floods in Sri Lanka and southern tip of India. Further west this January's positive anomaly over southern Africa matches the composite and includes the effect of Tropical Cyclone Eloise hitting and flooding Mozambique along the east coast and also heavy rain and floods to the west in Namibia. Further north in eastern Africa the two patterns do not match well.

In South America the effect of La Niña is fairly obvious with the composite and single month patterns of generally the same sign over the northern two-thirds of the continent. Over North America the composite shows La Niña usually producing negative anomalies across Mexico and the southern U.S.; however, the field for this January is mixed, with positive and negative features. While the Rocky Mountains were covered with less snow than normal as might be expected with La Niña, the west coast had heavy rain and snow in Washington state and late month mudslides in California. These events are connected to the positive precipitation anomaly in that area.

Elsewhere in northern middle latitudes other factors besides La Niña dominate, including intense storm track related partially to the breakdown of the stratospheric polar vortex during the month. Extending westward from the U.S. and Canadian west coast a narrow positive anomaly feature indicates a more intense than normal storm track in terms of precipitation. This feature is obvious in this month's anomaly map extending back across the Pacific at ~ 40°N, across northern Japan, and all the way across Asia and Europe and out into the Atlantic. This feature was associated with events such as an intense snowstorm in Spain, floods in Greece, Serbia, Bulgaria and Albania, heavy snows in northern Japan, intense cyclonic systems in the North Pacific and the atmospheric river events along the U.S. west coast.

Therefore, while the La Niña effects dominated much of the precipitation pattern in the tropics, at middle and high latitudes the La Niña composite was overrun by storm track and cyclone dynamics to produce a much different anomaly pattern in this latitude zone.