In the atmosphere, 500-millibar height pressure anomalies correlate well with temperatures at the Earth's surface. The average position of the upper-level ridges of high pressure and troughs of low pressure—depicted by positive and negative 500-millibar height anomalies on the September 2020 map—is generally reflected by areas of positive and negative temperature anomalies at the surface, respectively.

During September 2020, warmer-than-average temperatures were present across much of the globe. Temperature departures of +1.5°C (+2.7°F) or higher were observed across parts of the North Pacific Ocean, western parts of Canada and the U.S., the North Atlantic Ocean, South America, Europe, Asia, Australia, and Antarctica. Record-warm September temperatures departures were present across the Middle East and Mediterranean Sea, northern and southern parts of Asia, Kara Sea, the north and western Pacific Ocean, Indian Ocean, northwestern Australia, as well as parts of South America and the western contiguous U.S. Overall, about 8.49% of the world's land and ocean surfaces had a record-warm September temperature. This was the second highest September percentage since records began in 1951, behind September 2015. Cooler-than-average conditions were limited to parts of Greenland and adjacent portions of the North Atlantic Ocean, eastern Canada, the eastern U.S., the tropical eastern and central Pacific Ocean, the southern Indian Ocean, and the western part of Asia and northern Africa. However, no land or ocean areas had record-cold September temperatures. 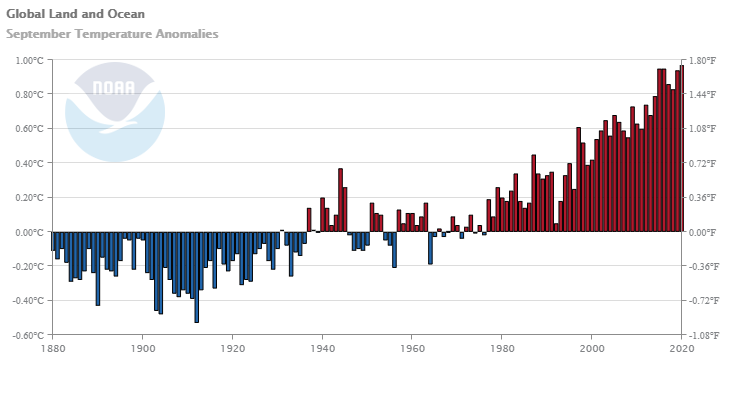 The January–September global land and ocean surface temperature was 1.02°C (1.84°F) above average and the second highest such period in the 141-year record. This was only 0.04°C (0.07°F) shy of tying the record set in 2016. According to NCEI's temperature ranking outlook, there is nearly a 65% chance of 2020 ending as the warmest year on record and about 35% chance of it being the second warmest year on record. 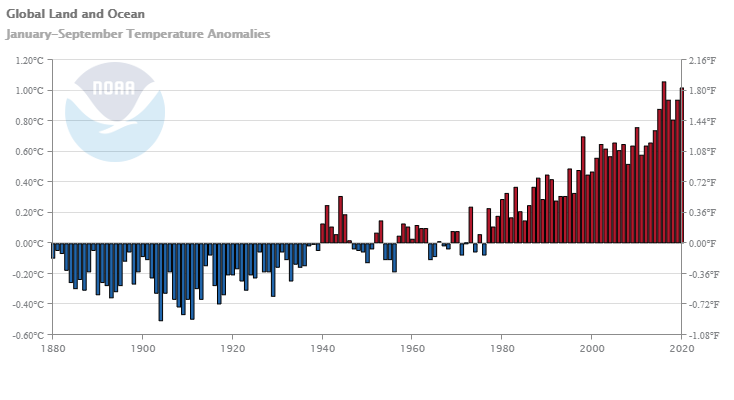 Meanwhile, South America and the Caribbean region had a January–September temperature departure that ranked as the second highest on record.

According to Spain's Agencia Estatal de Meteorología, the January–September 2020 national temperature is the highest since national records began in 1961 and exceeding the previous record set in 2017 by 0.1°C (0.2°F). 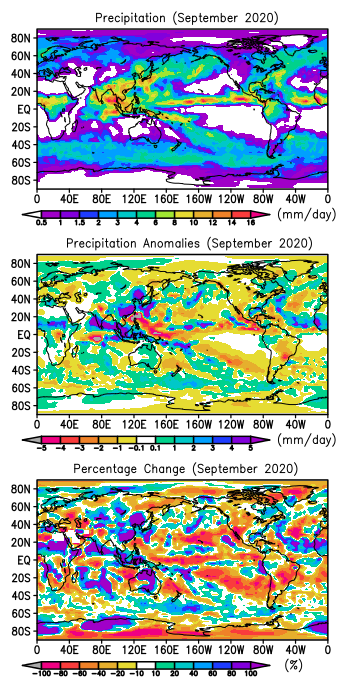 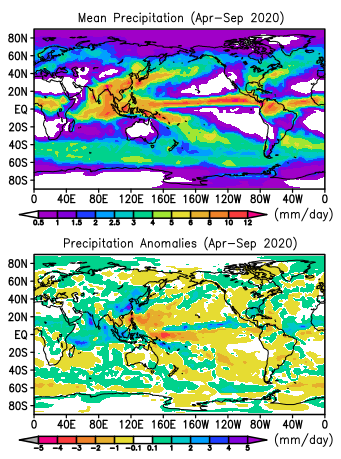 As the globe slides into the transition seasons of Fall in the Northern Hemisphere and Spring in the Southern Hemisphere, the summer monsoon in Asia is still active with significant rains, and the tropical cyclone season across the Pacific and Atlantic basins is well underway. A weak La Niña in the central/western Pacific is also evident. These and other large-scale (and smaller-scale) processes provide the drive for the precipitation patterns observed this month. Overlying these effects are trends in the precipitation patterns associated with global warming.

Figure 1 (top panel) presents the typical features of the summer monsoon over southeast Asia providing its usual heavy rainfall over the area. The ITCZ stretches across the Pacific and Atlantic above the Equator. Additional peaks are over Africa and South America, again north of the Equator, and at middle latitudes over ocean and land.

Over North America the anomaly chart (Fig. 1, middle panel) shows a few positive anomalies along the Gulf coast related partially to tropical cyclone activity, but a large negative area across the western part of the continent. This region has been undergoing a long-term drought and an especially intense wildfire season this year. This rainfall deficit over land is connected to the larger sub-tropical dry zone to the west extending from the U.S. west coast to past Hawaii (see all panels in Fig. 1). To the south of this feature the ITCZ is evident with a narrow east-west positive anomaly (middle and bottom panels) with a break and then another positive anomaly in the far eastern Pacific associated with tropical cyclone tracks from the ITCZ to the northwest. To the south of the ITCZ another east-west band of negative anomalies is evident. This anomaly pattern in the eastern Pacific has been persistent as can be seen in Fig. 2, which shows results from the last six months and is a classic wet-getting-wetter (in the ITCZ), dry-getting-drier (in the sub-tropics) scenario in this region. Even rainfall trend maps in this region (not shown) show this type of feature over the last 40 years.

In relation to these rainfall features, Lau and Tao (2020) have explored circulation and other changes that are related to sub-tropical drying in certain regions as seen in the Figs. 1 and 2. One feature of these changes is a shrinking and intensification of the ITCZ indicating increasing upward motion there and an associated drying to the north of the that zone indicating increased subsidence there, essentially an intensification of the north-south Hadley circulation in this area. In this context, the GPCP monthly precipitation data were examined over the last few months and for the entire record of GPCP?back to 1979.

A summary result is shown in Fig. 3, where an index based on rainfall anomalies in the eastern Pacific and western North America zone is shown for the combined months of June-September. The index is the gradient between the ITCZ and the sub-tropics, in percentage rainfall anomaly terms because of the large mean rainfall differences between the two areas. Two things are immediately evident: 1) there is a gradual trend indicating a strengthening of the Hadley circulation over the 40-year period; and 2) that for the last few years, especially 2020, the north-south circulation was very strong, and was likely associated with drying over the mid-latitude zone. The trend may reflect a circulation trend associated with increased drying and increases in wildfire occurrences in the western U.S. The very high values for this year may be related to the harsh wildfire season this year. The trend, likely related to global warming (with possible influence from a Pacific Decadal Oscillation (PDO) shift around 1998), shows changes happening over the last 40 years related to circulation changes which result in rainfall distribution changes, not just over land, but over the ocean. Further examination of these relations is needed, but the results clearly indicate the value of precipitation information over both land and ocean to understand regional changes.

Elsewhere, strong positive anomalies exist over much of eastern China in September (Fig. 1, middle panel), where repetitive flooding has occurred through the summer season. Floods also occurred in Korea, both North and South and in western Japan this month due to tropical cyclones. A strip of positive anomalies running across southern India and the Bay of Bengal ends up in the Maritime Continent (MC). To the east of there, along the Equator over the western to central Pacific a negative anomaly of rainfall exists, just to the south of the ITCZ position this month. In actuality, the ITCZ is shifted northward from its normal position. The positive anomaly over the MC and this negative anomaly along the Equator is a likely result of the current weak La Niña, with negative SST anomalies along the central Pacific Equator. Over Australia positive rainfall anomalies cover a majority of the country, typical of La Niña conditions there in spring. These regional rainfall anomaly features may strengthen over the coming months if the La Niña persists, as forecasted.

Over Africa the ITCZ over land is strong this month with positive anomalies running east-west across the continent at 10 N. The rainfall features are related to flooding, especially in Sudan where flooding has been persistent during this rainy season, especially along the White Nile. Further west, flooding in Chad and along the west coast occurred. Even further to the west into the eastern Atlantic, tropical systems have been active, but often turning toward the extra-tropics as can be seen from the pattern of mean rainfall and anomalies (Fig. 1) through the central Atlantic affecting the Bermuda area, the Canadian maritime provinces and even further north towards Europe. The Gulf of Mexico was also active in September, with landfalling storms affecting coastal areas from Florida to Texas as seen in the positive anomalies.

In South America the continent is dominated by precipitation deficits in September, especially in southeast Brazil. The negative rainfall anomalies have persisted for months in this general area as part of a long-term drought that is also related to continuing wildfire issues in the Amazon. 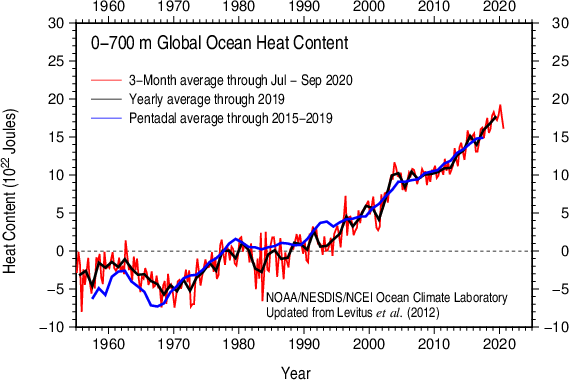 Global OHC for July–September 2020 tied with July–September 2018 for the second highest July–September OHC in our records, which extend back to 1955. Overall, the latest quarterly OHC reveals widespread warmer than normal conditions relative to the 1955–2006 mean, a situation observed since the end of 2016. However, a significant drop in the global OHC since January–March 2020 has occurred, which concides with the development in the last six months of a La Niña event. Warmer than normal conditions, > 10x105 J/m3, in the tropical and subtropical Western Pacific Ocean extend into the Central Pacific Ocean south of the Equator. In contrast, cool conditions, < -10x105 J/m3, in the tropical and subtropical Eastern Pacific Ocean extend westward around the Equator from the South America coast to about 170E. Much higher, > 30x105 J/m3, than normal OHC conditions continue to exist in the Gulf Stream/North Atlantic Current, the Southwestern Atlantic Ocean, and the Tasman Sea. Cool conditions, < -10x105 J/m3, still appear along the south and west coast of Australia. Similarly, cooler than normal conditions persist in the subpolar North Atlantic Ocean south of Greenland and Iceland, and in the Norwegian Sea. Much warmer than normal conditions, > 30x105 J/m3, exist along the Kuroshio Current/Kuroshio Extension/North Pacific Current, the Scotia Sea, and Northwestern Weddell Sea. Warm conditions dominate the North Indian Ocean.