In the atmosphere, 500-millibar height pressure anomalies correlate well with temperatures at the Earth's surface. The average position of the upper-level ridges of high pressure and troughs of low pressure—depicted by positive and negative 500-millibar height anomalies on the December 2019 map—is generally reflected by areas of positive and negative temperature anomalies at the surface, respectively. 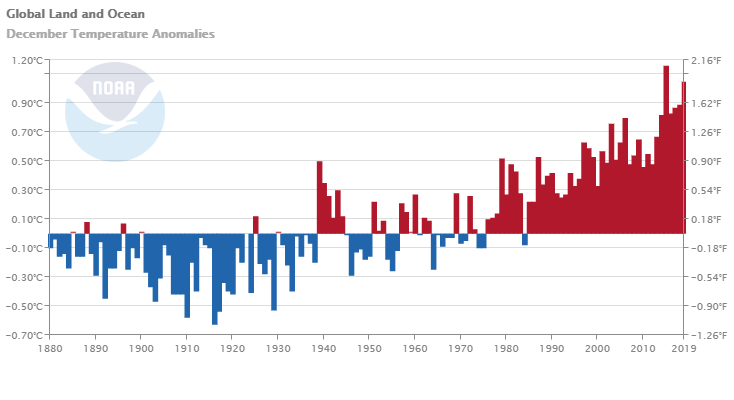 December 2019 was characterized by warmer-than-average conditions across much of the global land and ocean surfaces. The most notable warm temperature departures from average were present across much of Europe, western Asia, and Australia, and parts of northeastern Canada, where temperatures were at least 4.0°C (7.2°F) above average or higher. Record-warm December temperatures were observed across most of Australia and across parts of the Indian Ocean, Africa, Europe, the Atlantic Ocean, and the northern and western Pacific Ocean. ENSO-neutral conditions continued during December 2019. According to NOAA's Climate Prediction Center, ENSO-neutral is favored during the Northern Hemisphere winter (Southern Hemisphere summer). This forecast focuses on the ocean surface temperatures between 5°N and 5°S latitude and 170°W to 120°W longitude, called the Niño 3.4 region. Precipitation anomalies during December 2019 varied significantly around the world. December precipitation was generally drier than normal across parts of Australia, Alaska, across the contiguous U.S. northern Rockies Mountains and in the southern Mississippi Valley, Central America, southern Chile, eastern Brazil, eastern Europe, and across parts of northeastern and southeastern Asia. Wetter-than-normal conditions were notable across the contiguous U.S. southeast, southwest, and northern Plains, northern Europe, and northern and central Asia. 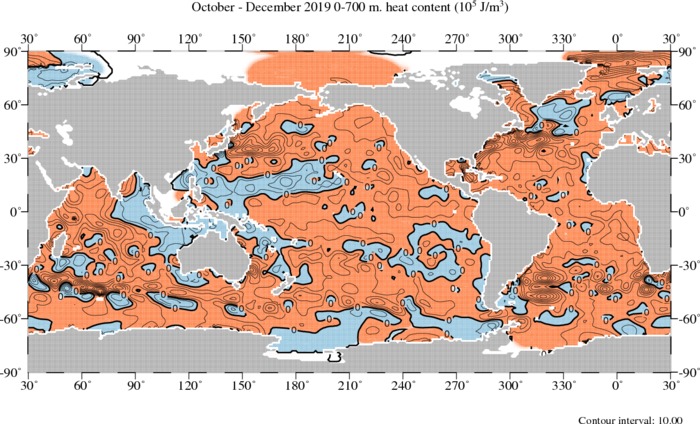 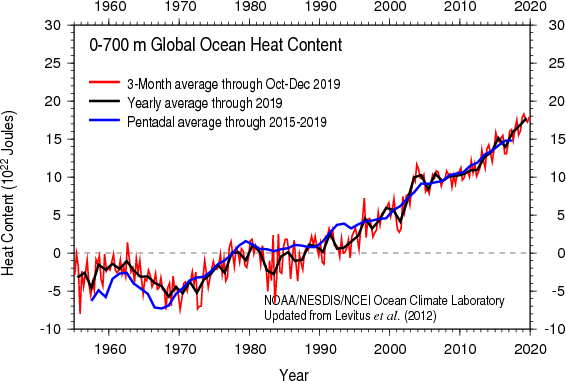 Global OHC for October–December 2019 was the highest October–December OHC, as well as the second highest quarterly OHC, in our records, which extend back to 1955. Overall, the latest quarterly OHC reveals widespread warmer than normal, i.e. the 1955–2006 mean, conditions, a situation observed since the end of 2016. Cool conditions, < -10x105 J/m3, appear in the eastern Indian Ocean extending from the Bay of Bengal to the west coast of Australia. In contrast, the rest of the Indian Ocean shows warmer, > 10x105 J/m3, than normal conditions. Cooler, < -10x105 J/m3, conditions continue to exist around the Philippines in the tropical and subtropical western Pacific Ocean, with the cool signal extending west in the South China Sea and northeastward into the central North Pacific Ocean. Much warmer, > 30x105 J/m3, than normal conditions are still observed in high latitudes off the tip of the Antarctic Peninsula and the northeastern coast of Greenland, while cooler than normal conditions persist in the subpolar North Atlantic Ocean south of Greenland and Iceland. Much higher, > 30x105 J/m3, than normal OHC conditions are observed in the Gulf of Mexico, Gulf Stream/North Atlantic Current, the Northwestern Pacific Ocean, the Southwestern Atlantic Ocean, along the northern Antarctic Circumpolar Current in the Indian Ocean, and off the east coast of Australia.