Beginning with the November 2019 Global Climate Report, NOAA is releasing the mean monthly temperature records product. This product provides historical perspectives on the occurrences of warm or cold mean monthly temperatures across the globe from the gridded (5° by 5°) NOAAGlobalTemp. On a monthly basis, the percentage area of the globe experiencing record warm or record cold conditions is reported as a time series for the month from 1951 to the present, complementing the percentile maps. In addition, the ratio of warm-to-cold records is plotted as a time series. For example, a ratio value of 2 indicates that the global area experiencing record warm mean monthly temperatures over the most recent month was 2 times larger than the global area experiencing record cold conditions. Time series of these ratios computed from seasonal (December–February, March–May, June–August, September–November) or annual (January–December) aggregations of monthly mean temperature records will also be produced.

Only grid cells that are completely free of missing values from 1951-present are utilized in the analysis, generally limiting our domain to 45°S to 75°N. For each retained grid cell, the warmest and coldest mean monthly temperatures in the 1951-present period of record are identified for each month. These monthly records are expressed as percent areas aggregated over 3 spatial domains: global land-only areas, global ocean-only areas, and the combined global land and ocean. The spatial aggregation accounts for differences in grid cell size with latitude (i.e., cosine weighting) as well as the fraction of land and ocean areas within coastal grid cells. Monthly ratios are computed by dividing the areal extents experiencing warm records with the areal extents experiencing cold records. For seasonal and annual aggregations, the warm and cold record areal extents are summed separately before dividing the totals. 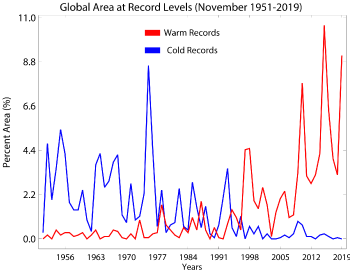 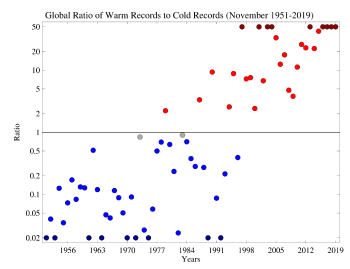 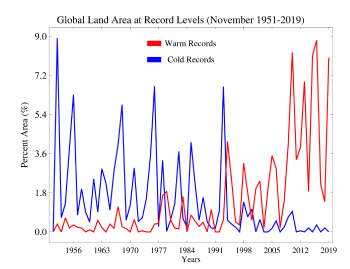 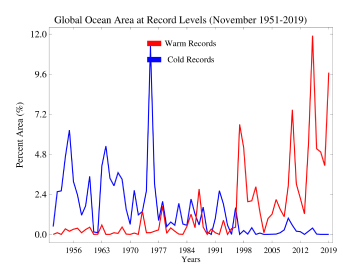