January–March 2017 maps—is generally reflected by areas of positive and negative temperature anomalies at the surface, respectively.

March 2017 was characterized by warmer- to much-warmer-than-average conditions across much of Earth's surface. The most notable warm temperature departures from the 1981–2010 average were recorded across the contiguous U.S., Europe, Russia, Mongolia, and Australia, where temperature departures were +3.0°C (+5.4°F) or greater. Some areas in northern and eastern Russia, central Australia, and the south-central contiguous U.S. had a record warm March. Near- to cooler-than-average conditions were present across Canada, Alaska, China, and parts of central Asia, with the most notable cool March temperature departures across western Canada and Alaska (-3.0°C / -5.4°F or lower). However, no land area had a record cold March. According to NCEI's Regional Analysis, four of the six continents had at least a top seven warm March since continental records began in 1910, with Europe and Oceania having their second warmest March on record.

Much of the world's oceans surfaces also experienced warmer- to much-warmer-than-average conditions during March 2017. Record warmth was limited to sparse areas across the central, eastern and western equatorial, and southern Pacific Ocean, southern Atlantic Ocean, and southwestern Indian Ocean. Near- to cooler-than-average conditions were observed across the North and Central Pacific Ocean, North Atlantic (south of Greenland), eastern Indian Ocean, and parts of the central and southern Atlantic Ocean. No ocean areas had a record cold March.

ENSO-neutral conditions continued to be present across the equatorial Pacific Ocean during March 2017. According to NOAA's Climate Prediction Center, ENSO-neutral conditions are favored to persist through the Northern Hemisphere spring (Southern Hemisphere fall) 2017, with increasing chances for El Niño development by later summar and fall. This forecast focuses on the ocean surface temperatures between 5°N and 5°S latitude and 170°W to 120°W longitude, called the Niño 3.4 region.

The global land surface temperature during January–March 2017 was also the second highest on record at 1.75°C (3.15°F) above the 20th century average of 3.7°C (38.5°F). This value was behind the record warm 2016 by 0.31°C (0.56°F), but surpassed the now third warmest such period (2015) by +0.19°C (0.34°F). The first three months of the year were characterized by warmer- to much-warmer-than-average conditions across most of the Earth's land surface, with the most notable warm temperature departures across North America and much of northern Asia, where temperatures were 3.0°C (5.4°F) above average or higher. Record warm temperatures were observed across the south-central contiguous U.S., across much of Mexico, eastern Russia, and eastern Australia. Near- to cooler-than-average conditions were limited to Alaska and parts of western Canada and the western contiguous U.S. and scattered across parts of northern Africa, southeastern Europe, and the Middle East. No land areas had a record cold March. According to NCEI's Global Regional Analysis, five of the six continents had a top five warm January–March period, with South America (tied with 1998) and Oceania having their third warmest year-to-date since continental records began in 1910. Europe had its coldest January –March period since 2013.

The average global sea surface temperature for January–March 2017 was 0.68°C (1.22°F) above the 20th century average of 15.9°C (60.6°F)—also the second highest in the 138–year record, behind 2016 by 0.14°C (0.25°F) and 0.07°C (0.13°F) higher than 2010. Warmer- to much-warmer-than-average conditions engulfed much of the Earth's ocean surfaces, with record warmth observed across parts of western, central, and eastern Pacific Ocean, western Indian Ocean, and scattered across parts of central and the southern Atlantic Ocean. Near- to cooler-than-average temperatures were recorded across the North and Central Pacific Ocean, central and eastern Indian Ocean, the northern and southern Atlantic Ocean. No ocean areas had a record cold January–March period.

The maps below represent precipitation percent of normal (left, using a base period of 1961–1990) and precipitation percentiles (right, using the period of record) based on the GHCN dataset of land surface stations. As is typical, precipitation anomalies during March 2017 varied significantly around the world. March 2017 precipitation was generally drier than normal across Alaska, the southwestern and southeastern contiguous U.S., northern and southern Africa, central, southern and eastern parts of Asia, and central Australia. Wetter-than-normal conditions were notable across Mexico, the northwestern U.S., central and southern Argentina, eastern Australia, and southeastern parts of Asia. 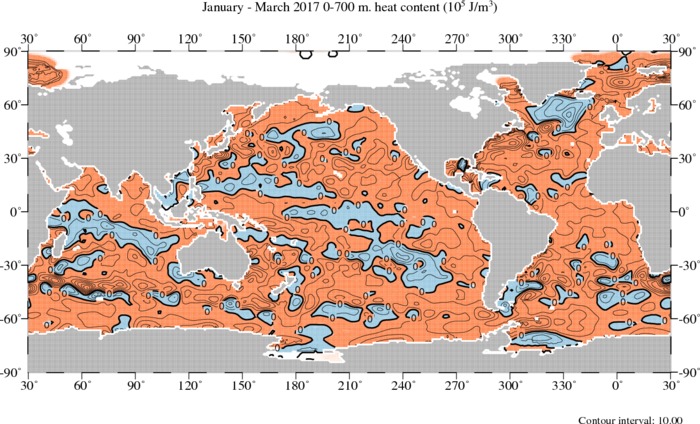 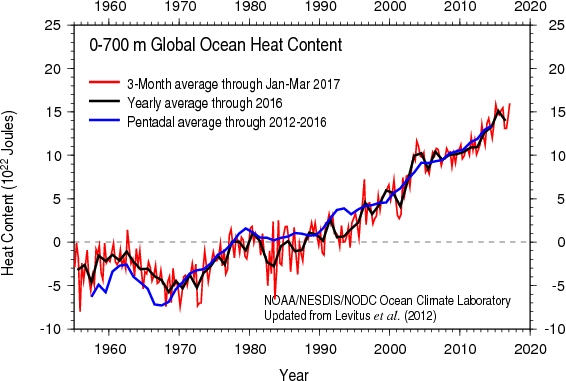 Global OHC for January–March 2017 was the highest January–March OHC in our record. Overall, the latest OHC reveals widespread warmer than normal conditions, a situation already observed in the last quarter of 2016. As during that period, Baffin Bay and the Barents Sea, the Gulf Stream/North Atlantic Current, the Kuroshio Current/Kuroshio Extension, and the Agulhas Current and its retroflection, as well as the western Gulf of Mexico and the Caribbean Sea, show much higher than long-term mean OHC. Cooler than normal conditions existed in the eastern Gulf of Mexico, the subpolar North Atlantic Ocean, the central South Pacific Ocean, and the Weddell Sea. Cooler than normal conditions observed in late 2016, although significantly eroded, still existed in early 2017 in the central North Pacific Ocean, around the Equator in the central Pacific Ocean, and tropical and western South Indian Ocean.