The graphic below depicts the monthly global temperature anomalies - that is, each month compared its 20th average - since 1980, and the influence of the El Niño - Southern Oscillation (ENSO) phenomenon.

The height of the bar represents the global temperature anomaly for the month. The color of the bar represents the ENSO condition, as represented by the temperature anomaly in the Niño3.4 region during that month. Months colored in red had Niño3.4 temperatures more than 0.5°C (0.9°F) above the 1981-2010 "normal". This is analogous to an El Niño condition. Blue represents La Niña-like conditions, more than 0.5°C (0.9°F) cooler than normal. The official ENSO status designation from NOAA's Climate Prediction Center is more sophisticated, and assesses ENSO conditions over multiple months. However, the single-month approach here is useful to see ENSO's impact on global temperature anomalies.

Several factors are apparent in the figure. First, nearly every month since 1980 has been above the 20th century average, and has generally warmed through the period. Second, El Niño-like conditions (those months in red) tend to be warmer than neighboring periods, and La Niña-like conditions (blue) tend to be cooler. Third, protracted El Niño-like episodes tend to warm through the event, while La Niña-like episodes tend to cool through the event. Fourth, and finally, there are exceptions to all of the above points. 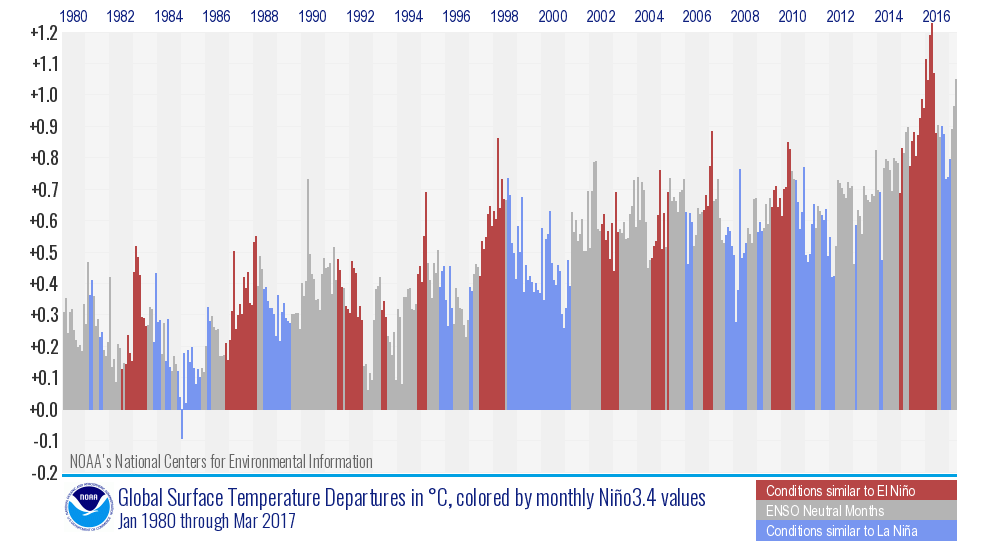