July–September 2016 maps—is generally reflected by areas of positive and negative temperature anomalies at the surface, respectively.

The combined average temperature over global land and ocean surfaces for September 2016 was the second highest for September in the 137-year record, 0.04°C (0.07°F) cooler than the record warmth of 2015. A few months after the end of one of the strongest El Niños in at least the past half century, this month effectively snapped the 16-month streak of record warm monthly global temperatures.

Warmer- to much-warmer-than-average conditions were present across most of the world's land surfaces, with record warmth evident around the Great Lakes region in North America, parts of central and northern Europe, part of north central Russia, a region extending from central Asia southwest to northern Yemen and southern Oman, along with a couple of areas in equatorial Africa, as seen in the Land & Ocean Temperature Percentiles map above. Overall, with continental records dating to 1910, Europe and Asia were both record warm for September, while Africa was second warmest and North America third, according to NCEI's Global Regional analysis. Only western Australia observed below to well-below average temperatures for the month. No land areas experienced record cold temperatures during September 2016.

For the oceans, the September globally-averaged sea surface temperature was 0.74°C (1.33°F) above the 20th century average of 16.2°C (61.1°F), tying with 2014 as the second highest on record for the month, behind only 2015. Including this month, the five highest September global ocean temperatures have all occurred in the past five years.

Most of the world's oceans were warmer- to much-warmer-than-average during September 2016, with record warmth present across parts of the northeastern, southeastern and western Pacific, parts of the Gulf of Mexico and the Caribbean, the Atlantic near the northeastern U.S. seaboard, and the Indian Ocean waters south of Indonesia. Cooler-than-average conditions were limited to small areas of the mid-North Atlantic, the central equatorial Pacific, the eastern Indian Ocean near southwestern Australia and to the east of Madagascar, and part of the Southern Ocean.

ENSO-neutral conditions prevailed during September 2016, with temperatures on the cool end of the neutral range. According to NOAA's Climate Prediction Center, La Niña is favored to develop (~70 percent chance) during the Northern Hemisphere fall 2016 and slightly favored to persist (~55 percent chance) during winter 2016/17.This forecast focuses on the ocean surface temperatures between 5°N and 5°S latitude and 170°W to 120°W longitude, called the Niño 3.4 region.

Much-warmer-than-average conditions engulfed the vast majority of the world's land surfaces during the January–September period, with a globally-averaged land surface temperature 2.84°F (1.58°C) above the 20th century average of 9.0°C (48.1°F), besting the previous record set in 2015 by 0.30°C (0.50°F). Record warmth for this period was notable across Alaska and western Canada, southern Mexico into Central America, much of northern South America, large parts of eastern, south central, and southwestern Africa, central Asia and parts of northern Russia, and the islands of southeastern Asia. According to NCEI's Global Regional analysis, all six continents had at least a top three warm January–September period, with North America and Asia each observing a record high average temperature for January–September since continental records began in 1910. No land areas experienced cooler-than-average conditions during January–September 2016.

<!-- <p>Select national information is highlighted below. (Please note that different countries report anomalies with respect to different base periods. The information provided here is based directly upon these data): --!>

The average global sea surface temperature for the year-to-date was the highest for January–September in the 137-year period of record, at 0.78°C (1.40°F) above average, surpassing the previous record set in 2015 by 0.08°C (0.14°F). Record warm sea surface temperatures during January–September 2016 were notable across several sections of the eastern and western Pacific, especially in the southern portion, much of the Gulf of Mexico and the Caribbean, most of the western Atlantic near the United States and the eastern Atlantic near southern Africa, along with much of the eastern and central Indian Ocean. The only area with record cold and much-below-average temperatures was east of the Drake Passage off the southern tip of South America and a small section the the southern central Pacific. 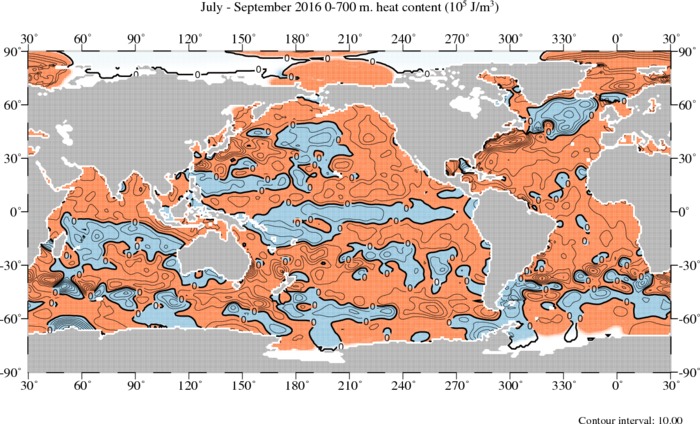 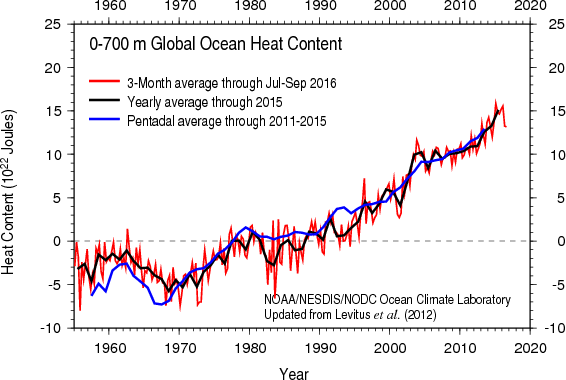 Global OHC for July–September 2016 was lower than for the same quarter in 2015, but still the second highest July–September OHC in our record. The central North Pacific Ocean and subpolar North Atlantic Ocean remain cooler than the long-term mean. The cooler-than-normal signal in the western equatorial and sub-tropical Pacific Ocean observed in the previous quarter has significantly eroded, but lower-than-normal OHC still extends around the Equator across the Pacific Ocean. Cooler than long-term mean conditions extend from Australia in the tropical South Indian Ocean up to the western boundary of the basin. Cooler-than-normal conditions also exist in the southwestern Atlantic and Indian Oceans. The Gulf Stream/North Atlantic Current and the Kuroshio Current/Kuroshio Extension regions showed higher than long-term mean OHC.

The maps below represent precipitation percent of normal (left, using a base period of 1961–1990) and precipitation percentiles (right, using the period of record) based on the GHCN dataset of land surface stations. As is typical, precipitation anomalies during September 2016 varied significantly around the world. September precipitation generally was drier than normal across parts of the southern and southeastern United States, western Colombia, northern and central Argentina, most of Europe and various parts of Russia and Asia. Wetter-than-normal conditions were notable across regions bordering the northern Mediterranean Sea, central Mongolia, South Korea to southern Japan, eastern Australia, and part of the central United States.