Temperature anomalies and percentiles are shown on the gridded maps below. The anomaly map on the left is a product of a merged land surface temperature (Global Historical Climatology Network, GHCN) and sea surface temperature (ERSST.v4) anomaly analysis as described in Huang et al. (2016). Temperature anomalies for land and ocean are analyzed separately and then merged to form the global analysis. For more information, please visit NCDC's Global Surface Temperature Anomalies page. The percentile map on the right provides additional information by placing the temperature anomaly observed for a specific place and time period into historical perspective, showing how the most current month, season or year compares with the past.

June 2016 map—is generally reflected by areas of positive and negative temperature anomalies at the surface, respectively.

The majority of the world's land surface had warmer to much-warmer-than-average temperatures during June 2016, with the largest temperature departures observed across much of north-central Russia, the Russian Far East, and northern Australia where temperature departures were 3.0°C (5.4°F) or higher. Record warmth was sporadically across parts of the southwestern contiguous U.S., southern Mexico, northeastern Brazil, northeastern and southwestern Africa, the Middle East, northern Australia, and Indonesia. The only land area with cooler-than-average conditions during June 2016, according to the percentiles map, was central and southern South America. No land areas had a record cold temperature during June 2016. According to NCEI's Global Regional Analysis, five of six continents had at least a top five warm June, with North America observing a record high average temperature for June.

According to the percentiles map, much warmer-than-average temperatures engulfed most of the world's oceans during June 2016, with record high sea surface temperatures across parts of the central and southwest Pacific Ocean, northwestern and southwestern Atlantic Ocean, and across parts of the northeastern Indian Ocean. Meanwhile, near to cooler-than-average conditions were limited across the northern Atlantic Ocean, northern Pacific Ocean and parts of the southern Oceans. The only ocean area with record cold temperatures was east of the Drake Passage off the southern tip of South America.

ENSO neutral conditions (neither El Niño nor La Niña) prevailed across the tropical Pacific Ocean during June 2016. According to NOAA's Climate Prediction Center, La Niña is favored to develop during August–October 2016, with about 55–60 percent chance of La Niña during the Northern Hemisphere fall and winter 2016–17. This forecast focuses on the ocean surface temperatures between 5°N and 5°S latitude and 170°W to 120°W longitude, called the Niño 3.4 region.

Six record warm monthly global temperatures during the first half of 2016 resulted in the highest global land and ocean average temperature for January–June at 1.05°C (1.89°F) above the 20th century average, besting the previous record set in 2015 by 0.20°C (0.36°F).

January–June 2016 was characterized by warmer to much-warmer-than-average conditions engulfing most of the world's land and ocean surfaces. Record warmth was widespread across Alaska, western Canada, southern Mexico, northern South America, central Africa, Indonesia, northern and eastern Australia, North Indian Ocean, and across parts of north-central Russia, western Asia, central and eastern tropical Pacific Ocean, the southwestern Pacific Ocean, and the northwestern Atlantic Ocean. Near to much cooler-than-average temperatures were observed across the northwestern Pacific Ocean, northern Atlantic Ocean (south of Greenland), and parts of the southern oceans. The only area with record cold temperatures was east of the Drake Passage off the southern tip of South America. 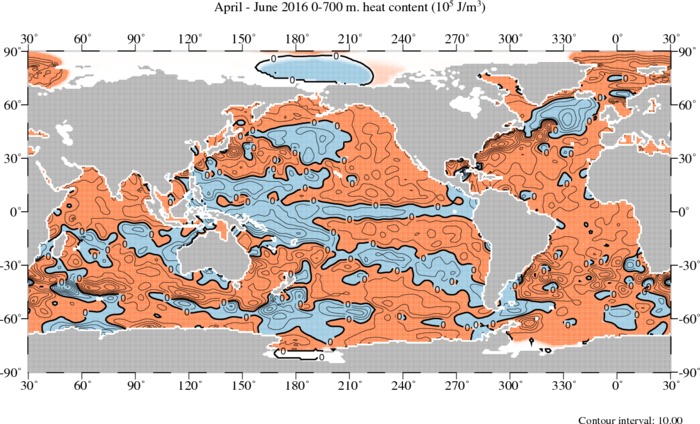 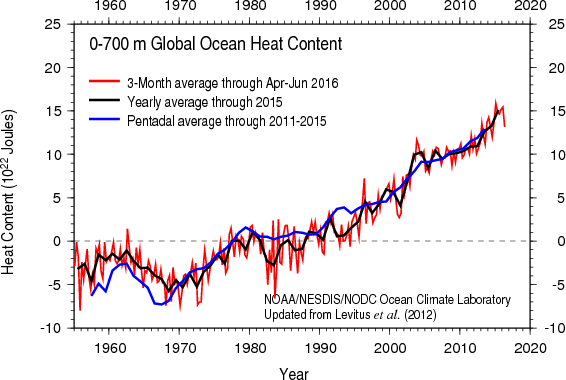 For the quarter Apr-Jun, the 2016 global OHC one was the third highest on record. The subpolar North Pacific and North Atlantic Oceans were cooler than the long-term mean. The Western Equatorial and Sub-tropical Pacific Ocean also show lower than normal OHC, a characteristic that extends across the entire basin along the Equator and southeastward across the South Pacific Ocean. Cooler than long-term mean conditions were present in the South Indian Ocean and in the Southern Ocean south of Australia and New Zealand. The Gulf Stream/North Atlantic Current region showed higher than long-term mean OHC in the western North Atlantic Ocean.