Temperature anomalies and percentiles are shown on the gridded maps below. The anomaly map on the left is a product of a merged land surface temperature (Global Historical Climatology Network, GHCN) and sea surface temperature (ERSST.v4) anomaly analysis as described in Huang et al. (2016). Temperature anomalies for land and ocean are analyzed separately and then merged to form the global analysis. For more information, please visit NCDC's Global Surface Temperature Anomalies page. The percentile map on the right provides additional information by placing the temperature anomaly observed for a specific place and time period into historical perspective, showing how the most current month, season or year compares with the past.

March 2016—is generally reflected by areas of positive and negative temperature anomalies at the surface, respectively.

The combined average temperature over global land and ocean surfaces for March 2016 was the highest for this month in the 1880–2016 record, at 1.22°C (2.20°F) above the 20th century average of 12.7°C (54.9°F). This surpassed the previous record set in 2015 by 0.32°C / (0.58°F), and marks the highest monthly temperature departure among all 1,635 months on record, surpassing the previous all-time record set just last month by 0.01°C (0.02°F). Overall, the nine highest monthly temperature departures in the record have all occurred in the past nine months. March 2016 also marks the 11th consecutive month a monthly global temperature record has been broken, the longest such streak in NOAA's 137 years of record keeping.

Most of Earth's land surfaces were warmer than average or much warmer than average, according to the Land & Ocean Temperature Percentiles map above, with record warmth notable across eastern Brazil, most of eastern and central Africa, much of southeastern Asia, and large portions of northern and eastern Australia. Most of northwestern Canada and Alaska, along with vast regions of northern and western Asia, observed temperatures at least 3°C (5°F) above their 1981–2010 average. Far northeastern Canada, parts of northwestern Africa, and a region of south central South America were cooler than average.

El Niño conditions weakened considerably in the central and eastern Pacific Ocean during March. However, the March globally averaged sea surface temperature remained 0.81°C (1.46°F) above the 20th century monthly average, similar to February. This was the highest global ocean temperature for March in the 1880–2016 record, surpassing the previous record set in 2015 by 0.18°C (0.32°F) and tying as the sixth highest departure from average among all 1,635 months in the record. The seven highest monthly global ocean temperature departures have all occurred in the past seven months.

Record high sea surface temperatures across most of the North Indian Ocean, along with parts of the central equatorial and southwest Pacific, contributed to the March warmth. Additionally, most of the eastern and central Pacific, large parts of the western and southern Atlantic, the southeastern Indian Ocean, and much of the Arctic Seas were much warmer than average. Areas with cooler or much cooler-than-average temperatures included areas to the south of Greenland in the North Atlantic and in the Southern Ocean to the southeast of South America near Antarctica, both of which have observed this pattern for up to two years. An area off the West Antarctic Peninsula was record cold.

With respect to El Niño, according to NOAA's Climate Prediction Center, a transition to ENSO-neutral conditions is likely during late Northern Hemisphere spring or early summer 2016, with an increasing chance of La Niña during the second half of the year. This forecast focuses on the ocean surface temperatures between 5°N and 5°S latitude and 170°W to 120°W longitude, called the Niño 3.4 region.

Record warmth was observed in various areas around the globe. An almost continuous swath of this warmth was observed from southern Africa to the North Indian Ocean to parts of southeastern Asia stretching into northern Australia. Additionally, parts of every inhabited continent and every major ocean basin had some regions with record warmth for the year-to-date.

The maps below represent precipitation percent of normal (left, using a base period of 1961–1990) and precipitation percentiles (right, using the period of record) based on the GHCN dataset of land surface stations. As is typical, precipitation anomalies during March 2016 varied significantly around the world. March precipitation was notably drier than normal across various parts of South America, the southwestern United States, far northwestern Africa, and areas in eastern and southeastern Asia, and notably wetter than normal across various regions of the United States southeastern Europe, and scattered regions of central and southern Asia. 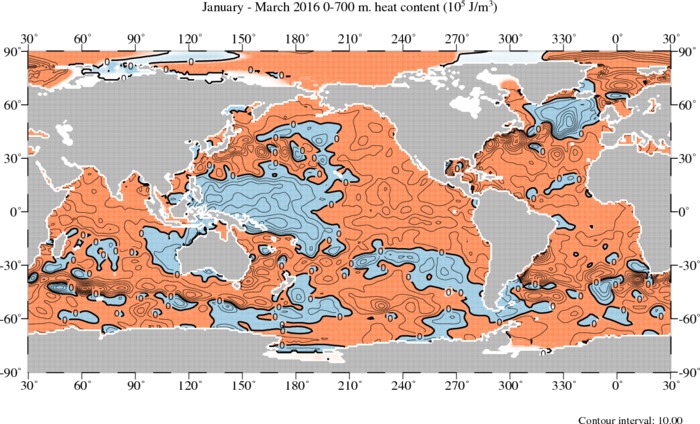 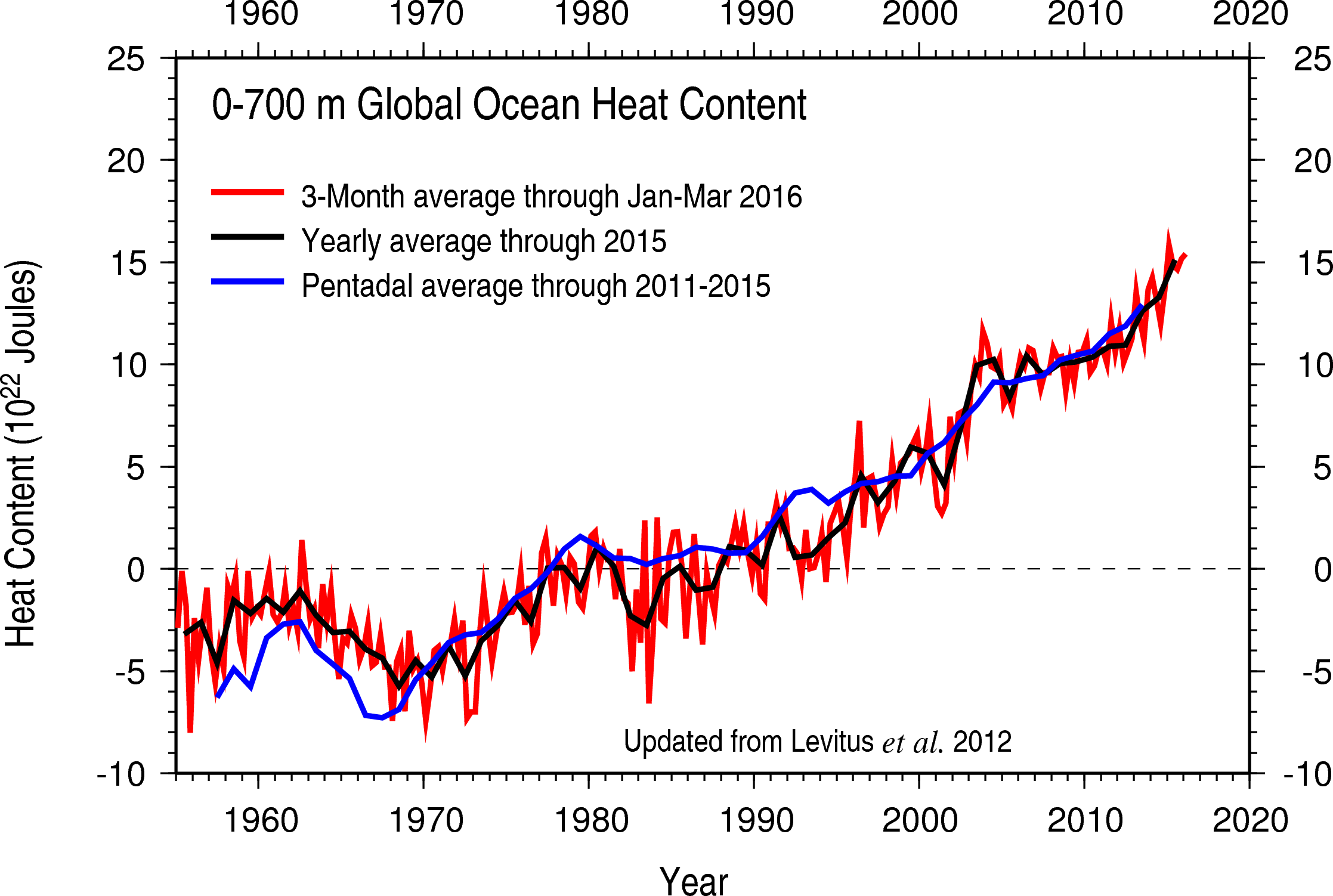 For the quarter Jan-Mar 2016, global OHC was the second highest on record, but only the eighth highest in the Pacific basin. The Pacific included areas of cooler than normal OHC in the western Central Pacific and South Eastern Pacific, consistent with the pattern of the El Niño phenomena. The subpolar North Atlantic was also cooler than the long-term mean, as well as the area west of Australia. Otherwise, OHC increased over the long-term mean for most of the rest of the global ocean.