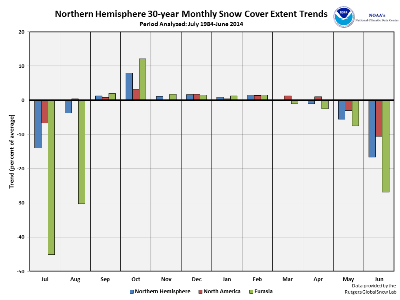 According to the National Snow and Ice Data Center (NSIDC), the Northern Hemisphere (Arctic) sea ice extent — which is measured from passive microwave instruments onboard NOAA satellites — averaged for June 2014 was 11.31 million square km (4.37 million square miles), 580,000 square km (220,000 square miles), or 4.9 percent, below the 1981-2010 average. This was the sixth smallest June Arctic sea ice extent on record. The rate of ice decline during June across the Arctic was faster than average, with sea ice retreating most rapidly towards the end of the month. According to the NSIDC, large areas of the Laptev Sea became ice free during June, with below-average ice cover also observed in the Barents Sea, Hudson Bay, and the East Greenland Sea. The Kara Sea, which has experienced much-below-average sea ice during the past several summers, had closer to average sea ice extent during June 2014. However, the ice extent in this region was still below the 1981-2010 average. Overall, June Arctic sea ice extent is decreasing at an average rate of 3.5 percent per decade.