Data were provided by the Global Snow Laboratory, Rutgers University. Period of record is 1967-2012 (47 years). 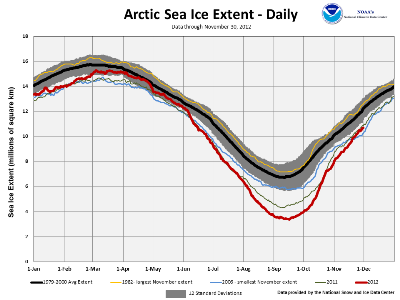 Arctic sea ice expanded rapidly during November, at a rate of 98,600 square km (38,100 square miles) per day which is faster than average for the month. By the end of the month, the central Arctic Ocean had completely refrozen and the Bering Sea had above-average sea ice coverage. The Barents and Kara seas were much slower to freeze, both of which continued to be mostly ice free by the end of November. Below-average ice cover was observed for Baffin and Hudson Bays.