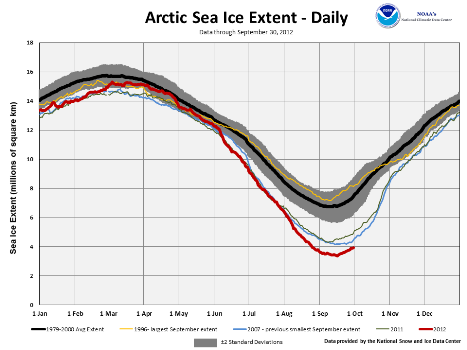 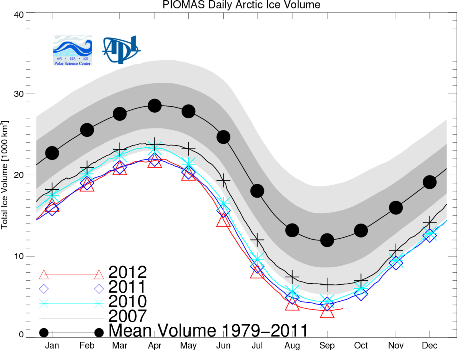 When using Arctic sea ice extent to monitor the state of sea ice conditions across the Arctic, no information is available on the thickness of the ice. To compensate for this, the Polar Science Center at the University of Washington developed a modeled dataset to measure the volume of Arctic sea ice using the Pan-Arctic Ice Ocean Modeling and Assimilation System (PIOMAS). Sea ice volume is an important climate indicator because it depends on both ice thickness and extent and therefore more directly tied to climate forcing than extent alone. According to this dataset, Arctic sea ice volume reached a monthly low value during September 2012, at 3,400 km3, the smallest monthly sea ice volume on record. The previous record small Arctic sea ice volume for September occurred in 2011 at 4,200 km3. The September 2012 value is 72 percent lower than the mean over 1979-2011 period, 80 percent lower than the maximum in 1979, and 2.0 standard deviations below the 1979-2011 trend. 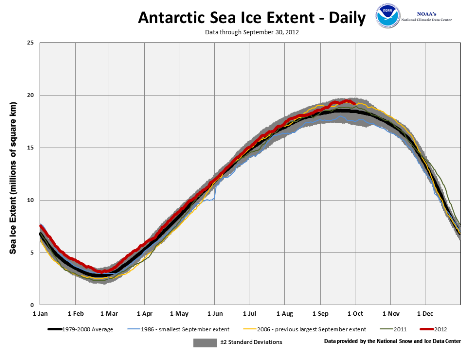 Arctic summer sea ice is shrinking much more rapidly than the rate at which Antarctic winter sea ice is expanding. Over the 1979-2012 record, the Arctic has experienced significant ice loss, while the growth of Antarctic sea ice has been slight. The September 2012 record low Arctic sea ice extent was 6.2 standard deviations below its 1979-2000 average, while the record large Antarctic sea ice extent was 2.1 standard deviations above its 1979-2000 average. Differences in hemispheric weather patterns, ocean currents, and geography partially account for these differing sea ice trends. A more detailed description of these differences is available through the NSIDC.