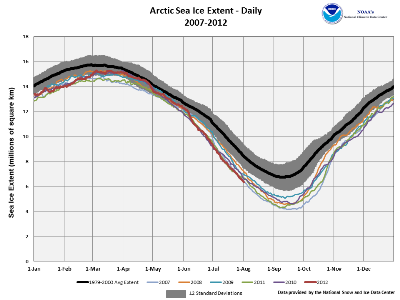 According to analysis by the NSIDC, Arctic sea ice continued to decline rapidly through July, much like it had in June. Sea ice coverage was below average across much of the Atlantic side of the Arctic, including the Kara, Laptev, East Siberian, and Beaufort seas. Near average sea ice coverage was observed in the Chukchi Sea. Sea ice was still blocking both the Northern Sea Route and the Northwest Passage at the end of July. 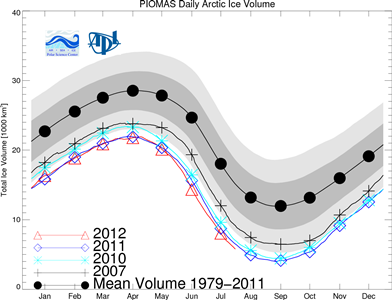 When using Arctic sea ice extent to monitor the state of sea ice conditions across the Arctic, no information is available on the thickness of the ice. To compensate for this, the Polar Science Center at the University of Washington developed a modeled dataset to measure the volume of Arctic sea ice using the Pan-Arctic Ice Ocean Modeling and Assimilation System (PIOMAS). According to the product’s documentation, sea ice volume is an important climate indicator. It depends on both ice thickness and extent and therefore more directly tied to climate forcing than extent alone. According to this dataset, Arctic sea ice volume reached a monthly low value during July 2012, at 8,300 km3 (1,990 miles3), about 700 km3 (170 miles3) less than the previous record low July volume which occurred in 2011. The July 2012 Arctic sea ice volume was also 65 percent lower than the maximum value in 1979, 55 percent below the mean value, and 2.2 standard deviations below the trend. 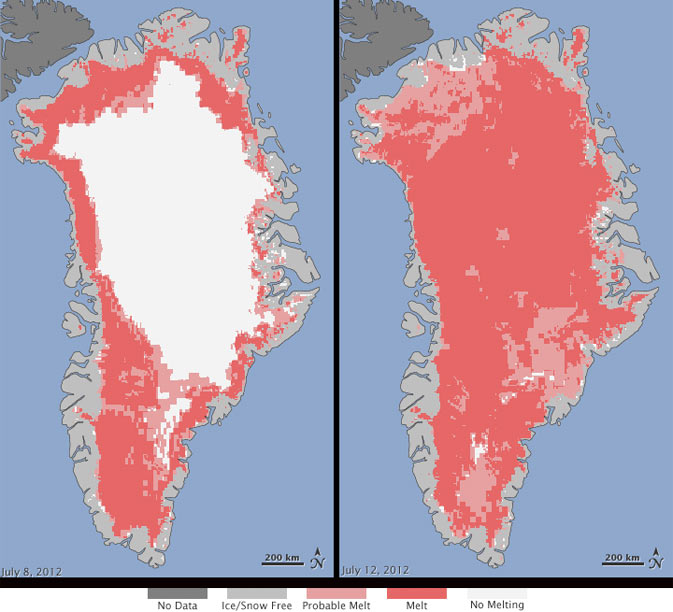 According to NASA researchers, for several days during early July, nearly the entire Greenland ice sheet experienced a brief period of surface melting, including the summit of the ice sheet. During any given summer, about half of the ice sheet experiences some degree of melting, with most of the ice melt occurring at lower elevations. The melting was associated with a strong high pressure system bringing warmer-than-average conditions to Greenland. This phenomenon has not been observed on the Greenland ice sheet since satellite records began 34 years ago. However, ice core data indicates that such an event occurs about once every 150 years. The melting at the lower elevations in Greenland impacted population centers and infrastructure. The runoff flooded rivers, taking out structures and roads in and around Kangerlussuaq, a key transportation hub. 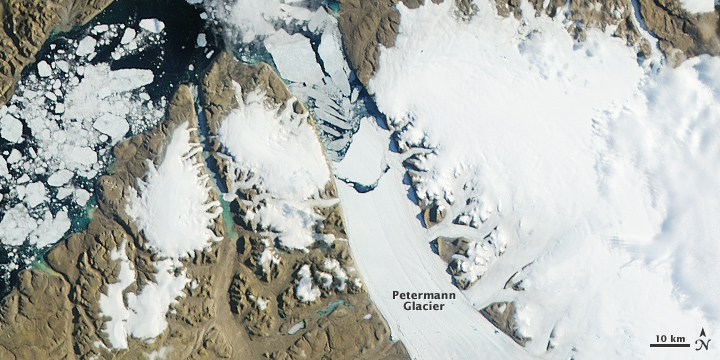 The Moderate Resolution Imaging Spectroradiometer (MODIS) on NASA’s Aqua satellite observed a large calving event on Greenland’s Petermann Glacier along the northwestern coast on July 16th and 17th. The separated iceberg was about 32.2 square km (12.5 square miles), only half the size of the ice sheet calved in 2010, but marks the second large calving of the glacier in two years. This calving marks a retreat of the glacier, with the calving front occuring father upstream than previous events.

NOAA National Centers for Environmental Information, State of the Climate: Global Snow and Ice for July 2012, published online August 2012, retrieved on May 29, 2020 from https://www.ncdc.noaa.gov/sotc/global-snow/201207.