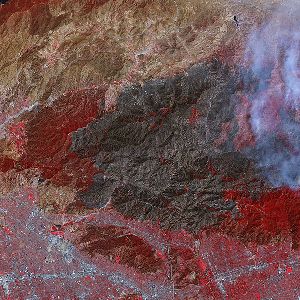 While significant fire activity early in the year threatened to set 2009 above average for both number of fires and acres burned, wetter conditions across many parts of the nation as the year progressed, coupled with effective fire management, helped to restrain fire activity by mid-year.  Despite the largest fire in Los Angeles County's (California) recorded history (Station fire), by the end of August the nationwide acreage burned by wildfire was very near the 2000–2009 average and thereafter declined below average.  Based upon data provided by the National Interagency Fire Center (NIFC) fire activity in 2009 ranked fifth highest (sixth lowest) out of the past decade in terms of number of fires — about 1 percent below the 2000-2008 average.  Acres burned in 2009 were 14.5 percent below the 2000-2008 average, ranking seventh highest (fourth lowest) since 2000.  Average fire size also ranked seventh highest out of the 2000-2009 period, at about 14 percent below average. 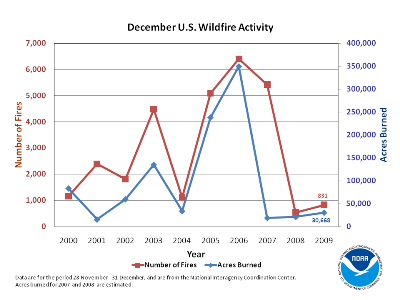 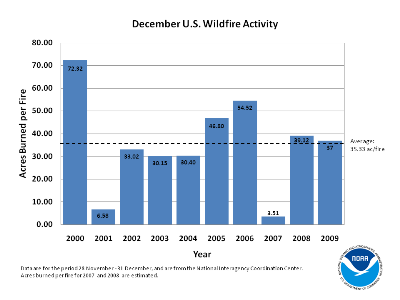 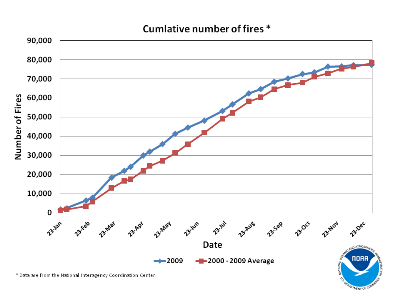 Cumulative number of fires in 2009 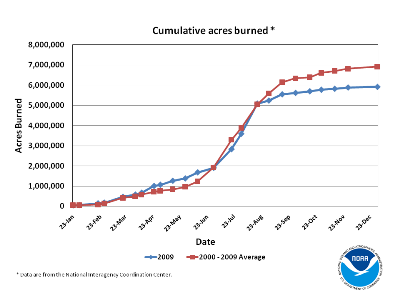 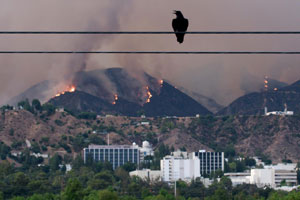 Los Angeles' Station fire, which began on August 26th, burned an estimated 160,577 acres, making it the largest fire in Los Angeles County's recorded history, and the tenth largest fire in California history since 1933.  The fire was also among the most destructive of 2009 — destroying 209 structures, including 89 homes, and claiming the lives of two fire fighters.  At its height early in September, the fire threatened an estimated 12,000 structures, including the historic Mount Wilson observatory and dozens of critical communications towers.  According to an InciWeb report, as of September 19th just under $100 million USD had been spent battling the blaze.  Nearly 40 miles (64 km) of the Angeles Crest Highway was closed indefinitely due to fire damage, with repair estimates of $12 million USD, according to the California Department of Transportation.  At the end of September, the fire was 98 percent contained, but continued to burn until it was finally declared 100 percent contained at 7 PM on 16 October, making it the longest lived fire of the 2009 season.  Fire investigators have determined that arson was the cause of the Station fire.