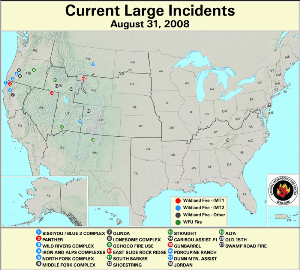 Approximately 7,000 acres (2,833 ha) of the U.S. were burned by wildfires during August 2008. Large wildfires were being fought in 11 states as August began. California alone reported 12 large wildfires at the end of July. Unfortunately, unfavorable weather conditions across the Northwest U.S. contributed to an increase in wildfire activity in Oregon, Washington, Idaho and Montana by the middle of the month. As August came to a close, 21 large fires were burning in 11 states, primarily in northern California, southern Oregon, and southern Idaho. Additional fires were being fought in several other western states, New Jersey, and along the North Carolina–Tennessee border. According to the National Interagency Fire Center, the Dunn Mountain fire in Montana, which had previously been reported as contained after scorching over 60,000 acres (24,281 ha), was relisted at the end of August as zero percent (0%) contained and threatening residences, communications and power lines. The Associated Press has reported that 3 firefighting crewmembers were killed on September 1st, when their P2V Air Tanker crashed on takeoff from Reno–Stead Airport in Nevada. The aircraft had been battling the Hope Valley fire south of Lake Tahoe, CA.

As of August 29th, 64,034 wildland fires have burned more than 4.5 million acres (1.8 million ha) so far this year, according to the National Interagency Fire Center (NIFC). This year to date now ranks seventh (since 2000) in quantity of acreage burnt – down from second at the end of May and third at the end of June. For the period from January 1st to August 29th, total acreage burnt falls below the 1999–2008 average of 5,564,288 acres (2,251,796 ha), while the number of fires is slightly above the 10–year average of 61,857, indicating an increased contribution of smaller fires. Six hundred seventy–four large fires have been contained to date in 2008.

According to the U.S. Drought Monitor, drought conditions deteriorated slightly in much of the western U.S. through August. Conditions improved slightly during August over parts of southern and eastern Texas, primarily as a result of the heavy rains associated with Tropical Storm Edouard (landfall on Aug. 5) following closely behind Hurricane Dolly in July (see the U.S. Drought Monitor Change Map for more information). At the end of August, much of the western U.S. was in moderate to severe drought. Severe to extreme drought continued across portions of eastern Montana and western North Dakota, and extreme to exceptional drought persisted in the western Carolinas despite substantial rainfall from Tropical Storm Fay in mid–August.

Fire danger increased significantly through August in Nevada, Utah and Wyoming, while improving across much of California, the southern U.S., the Dakotas and Minnesota, according to the U.S. Forest Service (USFS) – Wildland Fire Assessment System. The decrease in these locations corresponds with a general lack of large wildfires in states outside of the western U.S.

The Keetch–Byram Drought Index (KBDI), a widely used drought index for fire risk, continued to show extremely dry conditions across west–central California and through much of Nevada at the end of August. Smaller regions of high fire risk were present in parts of Texas, Oklahoma, the Gulf Coast, the Tennessee Valley, western North Dakota and the coastal Mid–Atlantic. A significant improvement in the KBDI index was seen across Florida during the second half of August as a result of Tropical Storm Fay, which dumped over 20 inches (50 cm) of rain on parts of the state.