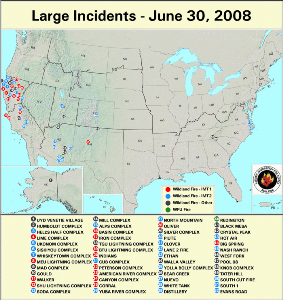 Although drought conditions have improved slightly in North Dakota and western Alaska since the end of May, conditions have worsened across the West, South and Southeast U.S., with many areas transitioning from moderate or severe to extreme or exceptional drought through June. Hawaii and southern Puerto Rico continued to experience substantial moisture deficits, and parts of New England were also abnormally dry as of the end of the month.

As of June 30th, there have been 36,761 wildland fires and more than 2.1 million acres burned so far this year, according to the National Interagency Fire Center (NIFC). Thanks in part to June rainfall and the efforts of fire fighters, the year 2008 now ranks third behind 2006 and 2002 in quantity of acreage burnt to date — down from second at the end of May — and the number of fires falls well below the 1998–2008 average. Approximately 466 large fires have been contained to date in 2008.

Through the month of June, fire danger, which had been high at the end of May, greatly diminished across New Mexico and western Texas. However, by the middle of the month, fire danger began to increase across the Great Basin and worsen in Colorado, Arizona and Southern California. At the end of the month, fire danger was highest across Nevada and Southern California, with the highest danger around Las Vegas, Nevada, according to the U.S. Forest Service (USFS) – Wildland Fire Assessment System.

According to the U.S. Forest Service (USFS) Experimental Fire Potential Index, large portions of the western United States, stretching from Washington and Idaho south to Southern California and western Arizona, exhibited the greatest potential for wildfire activity. Although drought continues to impact the South and southeastern U.S., fire potential is relatively low in those regions.

Medium to larger fuels (i.e., the June 30th 100–hr and 1000–hr fuel moistures) continued to be dry across most of the central and southern states of the western U.S., and showed substantial drying across the western and north–central parts of the U.S. from the start of the month.

The Keetch–Byram Drought Index (KBDI), a widely used drought index for fire risk, showed continuation of fire risk across Nevada and much of southern and western Texas, but improved conditions at the end of June for Florida, as compared to the June 8th KBDI.