ENSO-neutral conditions persisted across the equatorial Pacific Ocean during May. However, sea surface temperatures (SST) increased for a fifth consecutive month. The SST anomalies of all four Niño regions experienced warming in May (relative to April) and above-average temperatures extended across the equatorial Pacific Ocean by the end of the month.

Larger image of May 2009 Sub-Surface Temperatures

Subsurface oceanic heat content anomalies continued to increase in May in response to a large area of above-average temperatures near thermocline depth. These surface and subsurface oceanic anomalies typically precede the development of El Niño.

Larger image of May 2009 SST Anomalies

Current observations, recent trends, and the dynamic computer models indicate that conditions are favorable for a transition from ENSO-neutral to El Niño conditions by the end of August.

Larger image of Model Forecasts of ENSO from May 2009

Larger image of May 2009 Zonal Winds

Trade winds were weaker than normal over much of the tropical Pacific from late April to late May. During May, lower-level equatorial winds returned to near-average near the Date Line after enhanced low-level winds persisted in the region since early 2007. Collectively, the recent oceanic and atmospheric anomalies are consistent with ENSO-neutral conditions, but also reflect a potential trend towards El Niño. 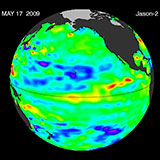 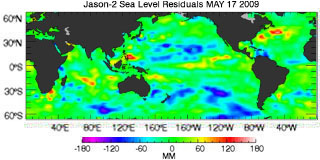 Pacific sea levels measured by the NASA/JPL Jason satellite reflected ENSO-neutral conditions across the tropical Pacific Ocean in May. Much of the equatorial Pacific was near normal during the month.

Outgoing Longwave Radiation (OLR) values decreased for the fifth consecutive month, from +1.0 W/m2 in April to +0.8 W/m2 in May. The map below on the left shows the spatial pattern of global OLR (in W/m2) measured by satellite during May. The lack of convection along the Equator near the Date Line has persisted since the development of the cold event in late May 2007.

Larger image of May 2009 OLR Anomalies

The monthly OLR anomaly for May marked the 28th consecutive month that the OLR index had a positive monthly value. Persistently high positive OLR indices are typical of the mature phase of a La Niña episode, while negative values indicate the presence of increased convection and warm phase conditions.

NOAA National Centers for Environmental Information, State of the Climate: El Niño/Southern Oscillation for May 2009, published online June 2009, retrieved on May 10, 2021 from https://www.ncdc.noaa.gov/sotc/enso/200905.