Please note that the values presented in this report are based on preliminary data. They will change when the final data are processed, but will not be replaced on these pages. 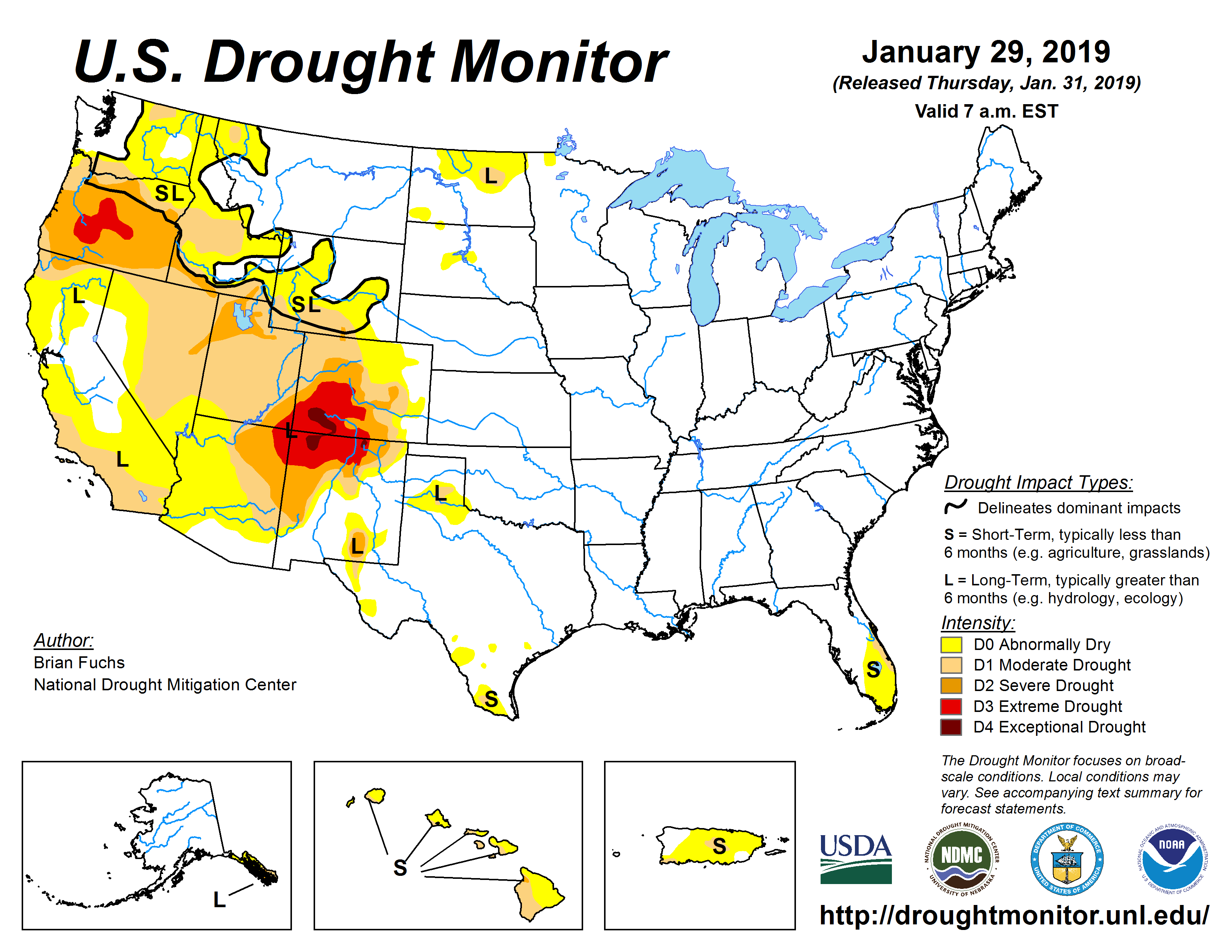 The upper-level circulation during January consisted of a number of Pacific weather systems moving in the jet stream flow across the southern parts of the CONUS, with some taking a track across the Midwest and up along the East Coast. They spread above-normal precipitation across parts of the West and Plains, and across much of the eastern CONUS along and east of the Mississippi River. The long-wave pattern shifted to a ridge over the western CONSU and trough over the east during the last half of the month, which funneled cold and dry Canadian air masses across the country east of the Rockies. In the end, the parts of the country that missed out on the precipitation included parts of the Pacific Northwest, Plains, and a strip along the Gulf of Mexico and Southeast coast, as well as most of Hawaii and parts of Alaska, Puerto Rico, and the U.S.-Affiliated Islands in the western Pacific. The precipitation this month fell on many areas that were in drought, so drought contraction far outweighed expansion. Drought and abnormal dryness contracted across much of the West and parts of the Plains, Northeast, and southern Florida. Abnormal dryness or drought expanded in other parts of the West and southern Plains, parts of Puerto Rico, and much of Hawaii. As a result, the USDM-based national moderate-to-exceptional drought footprint across the CONUS contracted from 21.9 percent of the CONUS at the end of December to 16.5 percent of the CONUS at the end of January (from 18.7 percent to 14.3 percent for all of the U.S.). According to the Palmer Drought Index, which goes back to the beginning of the 20th century, about 18.5 percent of the CONUS was in moderate to extreme drought at the end of January, decreasing about 3.5 percent from the 22.0 percent at the end of December.

Percent area of the CONUS in moderate to exceptional drought, January 4, 2000 to present, based on the U.S. Drought Monitor.

Drought conditions at the end of the month, as depicted on the January 29th, 2019 USDM map, included the following core drought and abnormally dry areas:

The Palmer drought indices measure the balance between moisture demand (evapotranspiration driven by temperature) and moisture supply (precipitation). The Palmer Z Index depicts moisture conditions for the current month, while the Palmer Hydrological Drought Index (PHDI) and Palmer Drought Severity Index (PDSI) depict the current month's cumulative moisture conditions integrated over the last several months. While both the PDSI and PHDI indices show long-term moisture conditions, the PDSI depicts meteorological drought while the PHDI depicts hydrological drought. The PDSI map shows less severe and extensive drought (as well as wet spell conditions) in some parts of the country than the PHDI map because the meteorological conditions that produce drought and wet spell conditions are not as long-lasting as the hydrological impacts. 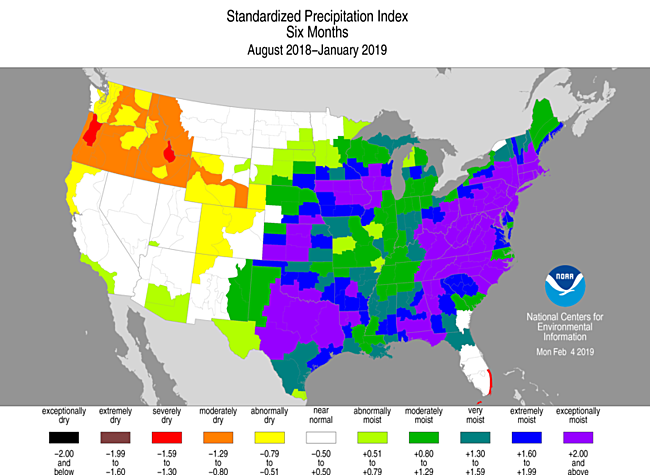 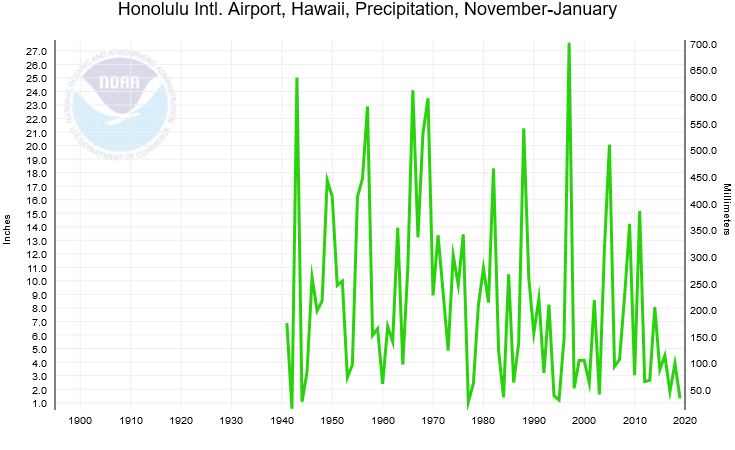 Drier-than-normal conditions dominated the Hawaiian Islands during the last 1, 2, and 3 months. Honolulu had the fifth driest November-January in the station's 1940-2019 record. October 2018 was wetter than normal across the state, but the severe dryness of the last three months still resulted in widespread below-normal precipitation at the 4-month time scale. Wetter-than-normal conditions are evident at longer time scales (last 6, 7, 10, 12 months). Wet conditions still dominate at the 24- and 36-month time scales, although stations on the Big Island show evidence of drier-than-normal rainfall totals at these time scales. Streamflow was above normal at many stations, but below-normal streamflow was beginning to appear at some stations. Drought and abnormal dryness expanded on the January 29th USDM map, with moderate to severe drought covering about 39 percent of the islands. 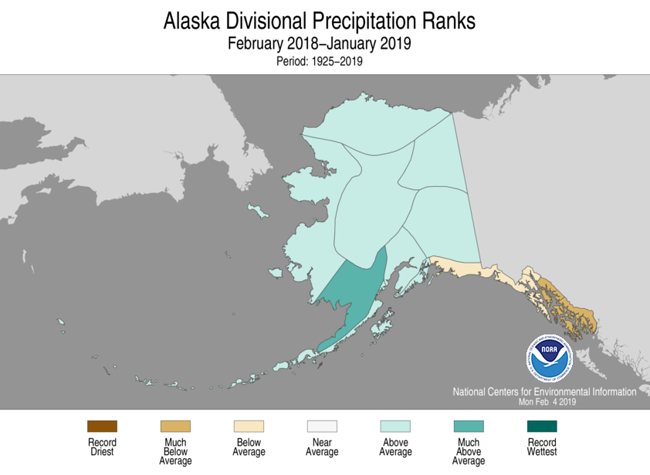 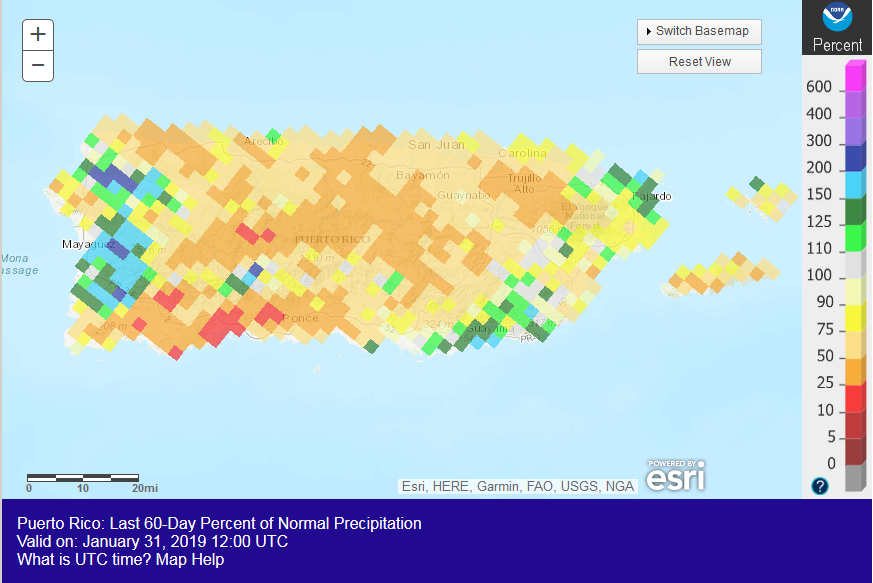 January 2019 was drier than normal in central Puerto Rico to the northern coast and in parts of the southwest, and wetter than normal along the west coast. Drier-than-normal conditions were widespread for the last 2 to 3 months, and still dominated the island at the 4-month time scale (October 2018-January 2019). The central to eastern sections, and the southern coast, were drier than normal at the 6-month time scale. Soils were dry along the southern coast, towards the interior, and in parts of the northwest, and some streams had below-normal flow. As seen on the January 29th USDM map, moderate drought expanded to cover about 9 percent of the island, with abnormal dryness to moderate drought extending across three-fourths (76%) of Puerto Rico.


With above-normal precipitation across much of the CONUS during January, most of the states had near-average to above-average precipitation ranks. Those five states with significant areas drier than normal — Oregon, Washington, Idaho, Montana, and Nebraska — ranked in the dry third of the historical record.

January 2019 was warmer than normal across the Primary Hard Red Winter Wheat agricultural belt, with parts of the region wetter than normal and parts drier than normal. The month ranked as the 46th wettest and 33rd warmest January, regionwide, in the 1895-2019 record.

October marks the beginning of the growing season for the Primary Hard Red Winter belt. October 2018-January 2019 was wetter and cooler than normal across the region. The 4-month period ranked as the second wettest and 53rd coolest October-January, regionwide.

It was a dry month in terms of drought at Saipan (Marianas); Woleai (FSM); and Ailinglapalap, Jaluit, Kwajalein, Majuro, Utirik, and Wotje (RMI), with rainfall amounts below the minimum thresholds (4 or 8 inches) required to meet most monthly water needs. It was a wet month (above the minimum thresholds) at the rest of the regular reporting stations in the USAPI. The 4- and 8-inch thresholds are important because, if monthly precipitation falls below the threshold, then water shortages or drought become a concern.

The dryness in the RMI was widespread and, in some locations, becoming significant. Ailinglapalap had the fifth driest January in a data record spanning 36 years, and Jaluit was second driest (out of 36 years of data) (although instrument exposure may have contributed some to the low rainfall totals at Jaluit). January 2019 was the eleventh driest January at Wotje (out of 36 years of data) and Utirik (21 years of data) and 16th driest at Kwajalein (67 years). Kwajalein also had the seventh driest September-January (67 years) and Ailinglapalap the seventh driest February-January (33 years). In the FSM, Woleai had the fifth driest September-January (30 years), Nukuoro the fourth driest March-January (34 years), Lukonor the second driest April-January (22 years), and Kosrae the second driest September-January (35 years). At the other extreme, the last 12 months (February 2018-January 2019) were the wettest such 12-month period at Kapingamarangi (out of 14 years of data) and second wettest at Saipan (30 years), Pohnpei (67 years), and Kwajalein (66 years).

The following analysis of historical data for the USAPI stations in the Global Historical Climatology Network-Daily (GHCN-D) dataset, augmented with fill-in data from the 1981-2010 Normals, helps put the current data into historical perspective by computing ranks based on the period of record. The table below lists the precipitation ranks for January 2019, September 2018-January 2019 (the last 5 months), and February 2018-January 2019 (the last 12 months). Some stations have a long period of record and their dataset is fairly complete, while other stations have a shorter period of record and the dataset has some missing data. 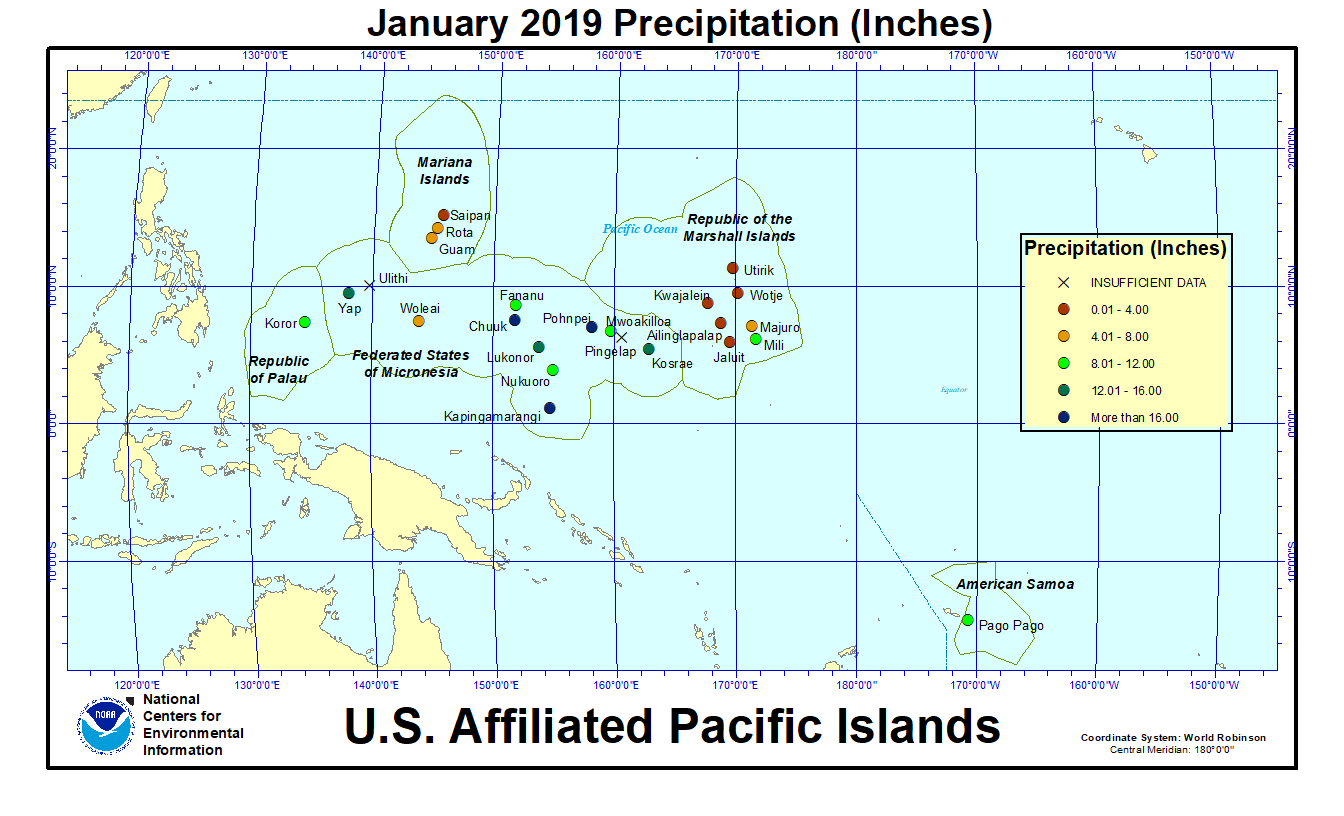 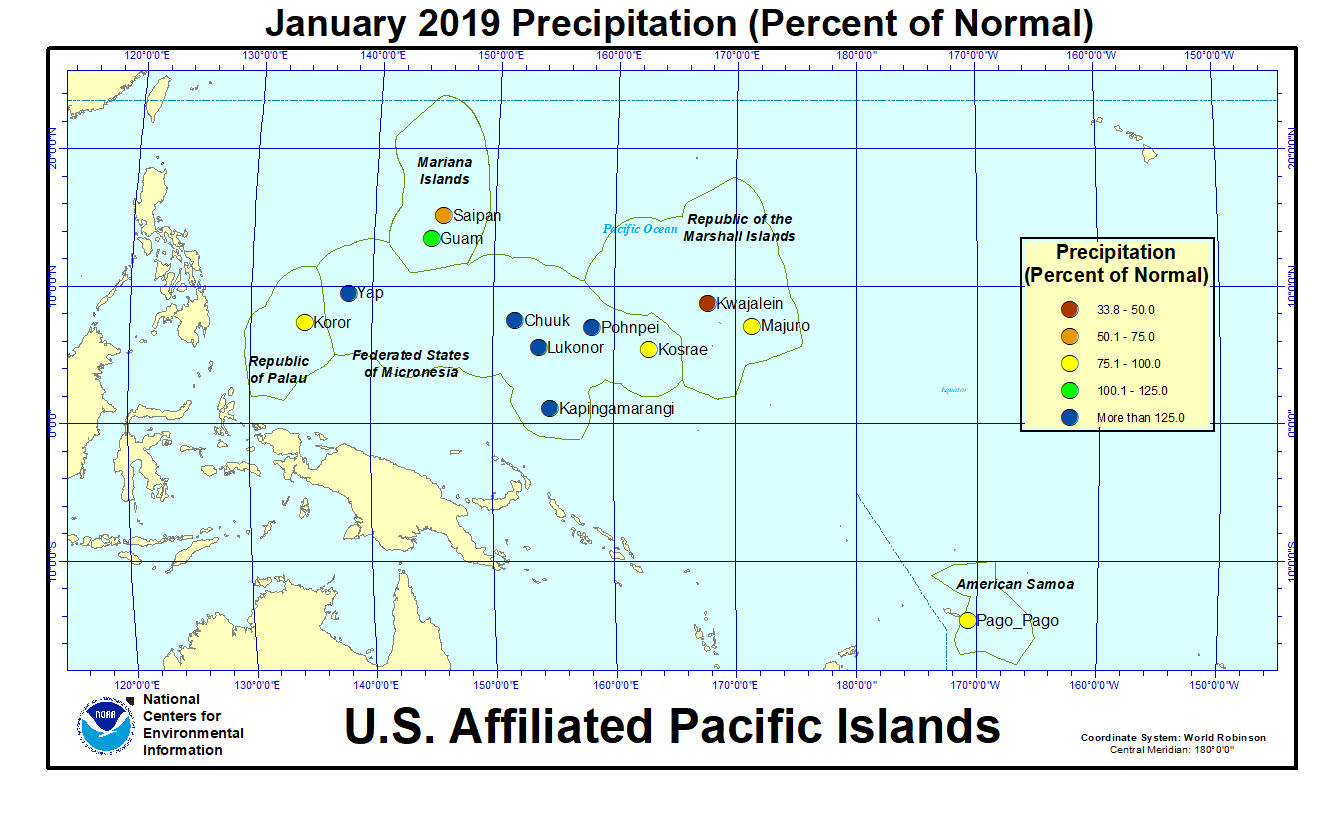 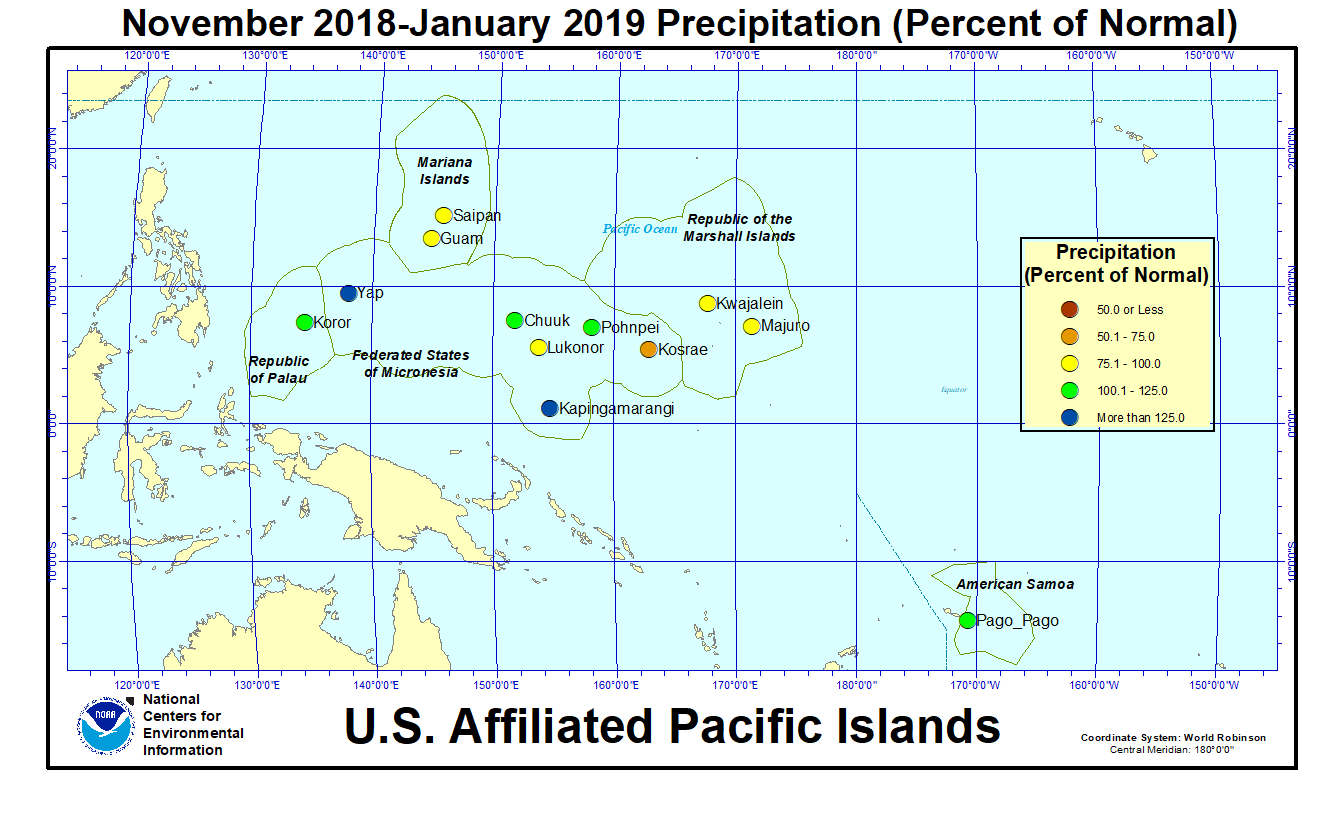 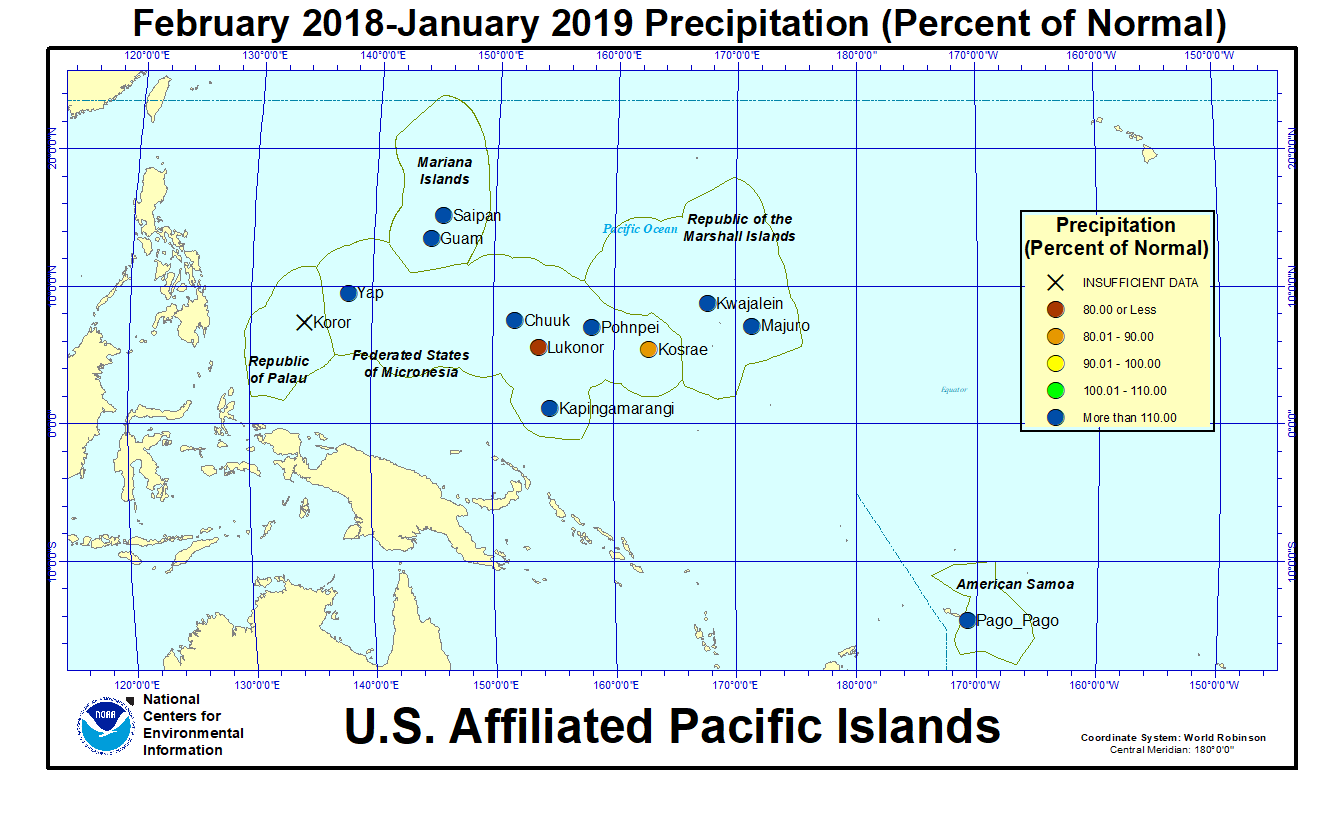 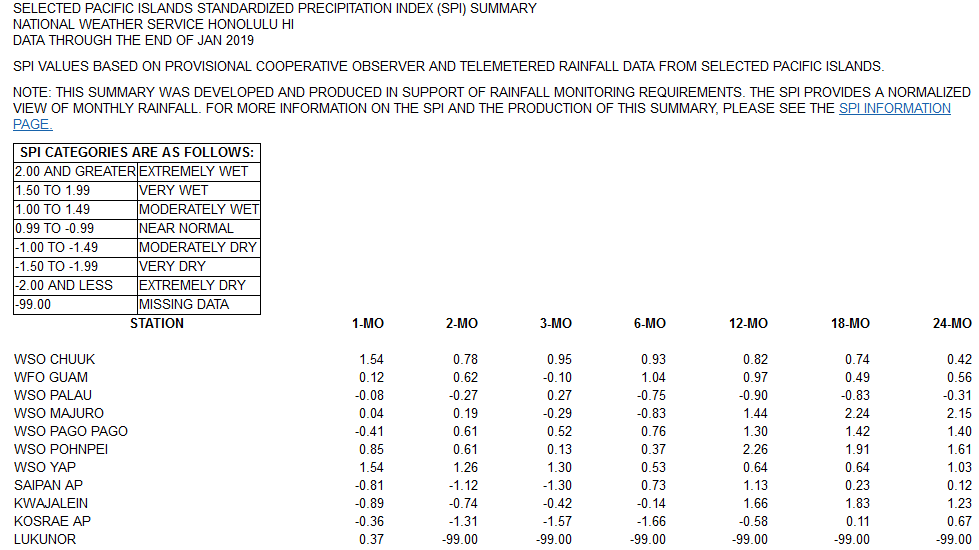 State/Regional/National Moisture Status
A detailed review of drought and moisture conditions is available for all contiguous U.S. states, the nine standard regions, and the nation (contiguous U.S.):