The year started out with areas of drought stretching from the Southwest and Central Plains to the Southeast, with moderate to extreme drought covering about 18 percent of the country (based on the U.S. Drought Monitor [USDM]). By the end of spring, drought had expanded and intensified, especially in the South, with 21 percent of the country in moderate to exceptional drought. The heat and dryness of summer further expanded and intensified drought, with expansion occurring in the Ohio to Mid-Mississippi valleys and about 28 percent of the U.S. classified in the moderate to exceptional drought categories. Some contraction occurred in the drought area during the autumn and early winter months, especially in the Midwest to Central Gulf Coast, but drought developed in the Upper Mississippi Valley, Northern Plains, and Far West, with about 27 percent of the country in moderate to exceptional drought by year's end. The percent area of the U.S. experiencing the worst USDM category (D4, exceptional drought) reached a peak of about 10 percent during the summer and early fall, which is a record in the 12-year history of the USDM. Drought continued during 2011 in Hawaii, but not as severe as it was in 2010.

The percent area* of the contiguous U.S. experiencing moderate to extreme drought (based on the Palmer Drought Index) started the year at about 18 percent, grew steadily to a peak of about 29 percent during the summer, then contracted slightly during the last two months, ending the year at about 25 percent. The Palmer Drought Index data go back 117 years. 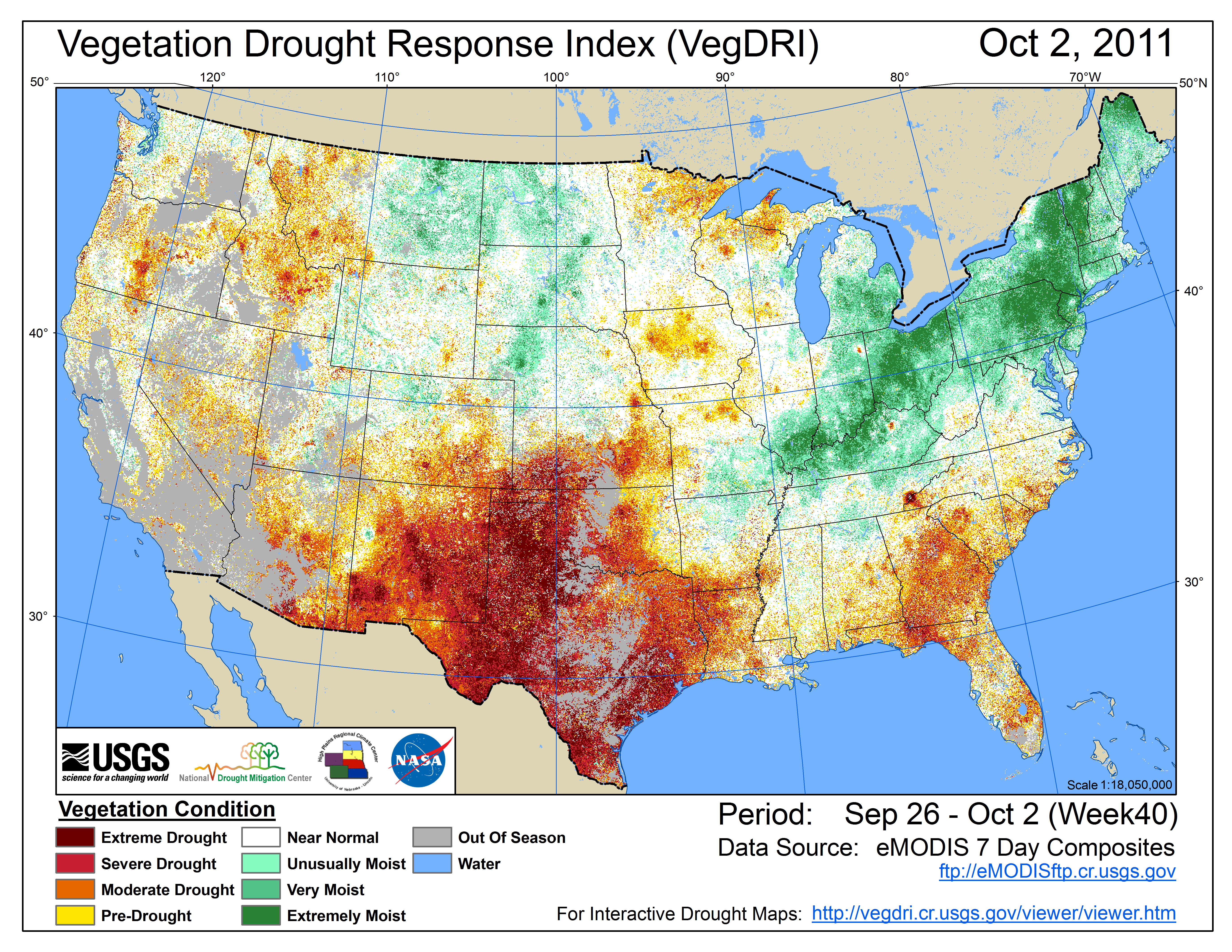 The drought epicenters during 2011 were the Southwest to Southern Plains, the Central Gulf Coast to Southeast, and Hawaii. Secondary drought areas developed in the Midwest, Upper Mississippi Valley to Northern Plains, and Far West. Low stream, reservoir and stock pond levels, and depleted soil moisture combined with high temperatures and evaporation to ravage agricultural (pasture, range and crop) lands as the growing season progressed. 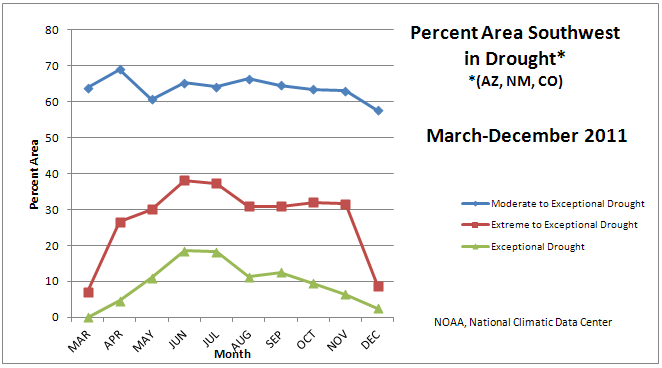 The Southwest (Arizona-New Mexico-Colorado) drought peaked in mid-summer with nearly 40 percent of the region experiencing extreme to exceptional drought.

The Southwest and Southern Plains were hardest hit by drought this year, with the southern drought centered squarely on Texas. The 2011 dry spell generally began in October of 2010 following a very wet period. Beneficial rains fell in some areas during October and November 2011, with December 2011 actually averaging wetter than normal for the state. Texas had the driest hydrologic year (October 2010-September 2011) in the 1895-2011 record, with New Mexico and Oklahoma ranking second driest and Louisiana third driest. The Rio Grande and Texas Gulf Coast river basins also had the driest hydrologic year on record. The dryness was so severe that, even with a wet December, 2011 still ranked driest on record for the calendar year (January-December) for Texas. Record heat occurred during the summer with Texas, New Mexico, Oklahoma, and Louisiana having the hottest-ever June-August and Texas experiencing record potential evapotranspiration (natural water demand). Several climate divisions in Texas, New Mexico, Oklahoma, and Louisiana, as well as Texas statewide and the Rio Grande and Texas Gulf Coast river basins, had record low values for the Palmer Hydrological Drought Index in a record that goes back 117 years.

The Gulf Coast had drier-than-normal conditions in February, April-June, and October-December. Heavy rains from Tropical Storm Lee cut a wet swath through the middle of the Gulf Coast drought area during September. For the Southeast, March and September were wetter than normal, with January-February, April-August, and December being much drier than normal. Georgia, the epicenter of the Southeast drought, had the second driest April-August in the 1895-2011 record.

The Midwest/Ohio Valley was especially wet during the first half of the year. July and August were much drier than normal, with moderate-to-severe drought developing by the end of summer from Kentucky and Indiana into Iowa. Precipitation returned beginning in September, effectively ending the dry spell. The first half of the year was wet for the Upper Mississippi Valley and Northern Plains as well. Dry conditions set in beginning in August, with Minnesota having the second driest August-December on record. Moderate to severe drought spread into the area by year's end, in spite of the earlier wetness.

Much of the West (except for the Southwest) had much-above-normal precipitation during the 2010-2011 wet season (October 2010-March 2011) and following spring and early summer. By May 31st, mountain snowpack and snow water equivalent were well above average. A drier-than-normal weather pattern dominated during the late summer and first part of the 2011-2012 wet season. Oregon had the third driest August-December, and moderate drought had spread from Oregon and Nevada into California by the end of the year.

Drought conditions in Hawaii were not as severe in 2011 as they were in 2010, but moderate to extreme drought lingered with significant long-term rainfall deficits remaining (last 12, 24, 36 months). Severely dry conditions caused by La Niña affected other Pacific islands under the jurisdiction of the United States early in 2011. The dry conditions peaked in February. Kapingamarangi was especially hard hit, with September 2010-February 2011 rainfall totalling 15 percent of normal and water conservation measures strongly encouraged at that time. Above-normal rainfall finally returned to Kapingamarangi in June 2011.


Tree ring records provide a useful paleoclimatic index that extends our historical perspective of droughts centuries beyond the approximately 100-year instrumental record. Several paleoclimatic studies have shown that droughts as severe as, or worse, both in magnitude and duration, than the major 20th century droughts have occurred in the U.S. during the last thousand years. The following paleodrought report was prepared by the NOAA/NCDC Paleoclimatology and Climate Monitoring branches during 2011: