There are several factors that are important in monitoring global or U.S. temperature: quality of raw observations, length of record of observations, and the analysis methods used to transform raw data into reliable climate data records by removing existing biases from the data. An additional process takes the multiple climate data records and creates U.S. or global average temperatures. Click on the questions below to reveal their answers.

Toggle All
Q1: Is the U.S. Surface Temperature Record Reliable?
Q2: What raw data are available for global temperature monitoring?

The number of land surface weather stations in the Global Historical Climatology Network (GHCN) drops off in recent years. This fact is an indication of our success in adding historical data. Every month data from over 1,200 stations from around the world are added to GHCN as a result of monthly reports transmitted over the Global Telecommunication System. This number is up from what it was a decade ago due to systematic efforts by the Global Climate Observing System (GCOS) and others to encourage countries to send in CLIMAT reports. If NCEI relied solely on such data that would be the maximum number of stations available. But we have systematically sought to increase the data holdings in the past through international projects such as the once a decade creation of World Weather Records as well as NCEI's own digitization of select Colonial Era archive data. The creation of the GCOS Surface Network is one example of a specific attempt to both enhance data exchange around the world and to identify and select the 'best' stations for long-term climate change purposes. The weighting scheme used to rate stations for the initial selection in the GSN clearly indicates the biases climatologists have in favor of stations that have been in operation for a long time, that are rural, are agricultural research sites, and are distributed throughout the world with increasing density the farther they are away from the tropics. The result of all these efforts is that GHCN has data for many thousands of stations in the period from the 1950s to the 1990s that cannot be routinely updated, thus the number of stations drops considerably in recent years.

Because 71 percent of the world is covered by oceans, NCEI also has a strong focus on collection of observations over the world's oceans. The global ocean temperature analysis is primarily based on buoy and ship observations from the International Comprehensive Ocean Atmosphere Dataset (ICOADS), while monthly data updates come from the Global Telecommunications System (GTS). NCEI is active in a continuing multi-decadal effort to digitize historical ocean observations that contribute to ICOADS. The number of sea surface temperature observations in ICOADS has increased due to recent digitization by NCEI. Other parts of NOAA are involved in ocean buoy deployments that also contribute to ICOADS and the GTS data streams. NOAA continues to seek to increase the amount of data available for global analyses.

NOAA maintains a network of thousands of stations, many of which have volunteer observers. A subset of 1,219 of these stations in the contiguous 48 states make up the U.S. Historical Climatology Network (USHCN). This dataset has undergone extensive quality control and corrections to remove biases. One of the differences between USHCN and GHCN is that for U.S. data, we have access to detailed station history information which is used to guide part of the bias removal process. Additionally, the new, high quality U.S. Climate Reference Network data are used to verify recent years of the USHCN analysis.

Q4: What corrections are needed to remove known biases in the individual data?

Existing data have well documented biases in them. The most important bias globally was the modification in measured sea surface temperatures associated with the change from ships throwing a bucket over the side, bringing some ocean water on deck, and putting a thermometer in it, to reading the thermometer in the engine coolant water intake. The bucket readings used early in the record were cooler than engine intake observations so the early data have been adjusted warmer to remove that bias. This makes global temperatures indicate less warming than the raw data. The NOAA Sea Surface Temperature bias-correction method that is applied to the historical data from the 1940’s and earlier is based on a comparison between nighttime marine air temperatures and SSTs from ICOADS. 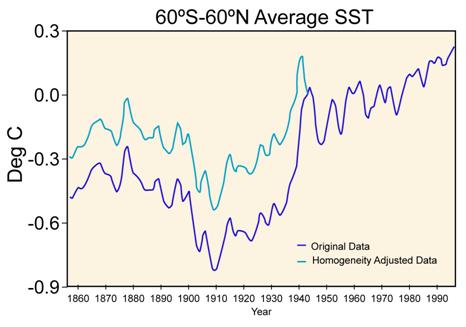 The figure shows that the impact of the adjustment to remove the cold bias from bucket sea surface temperature measurements warms the historical data, decreasing the amount of global warming the data indicate. From Smith and Reynolds, 2002.

The most important bias in the U.S. temperature record occurred with the systematic change in observing times from the afternoon, when it is warm, to morning, when it is cooler. This shift has resulted in a well documented increasing cool bias over the last several decades and is addressed by applying a correction to the data. 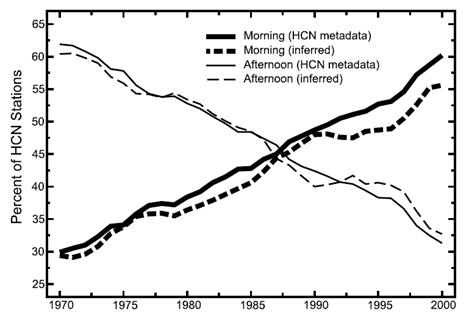 The figure shows the change in observing times at U.S. weather observing stations using two different methodologies, both of which indicate a shift from afternoon observing times to morning which impart a bias in the data, a bias which needs to be removed. From Vose et al., 2003.

Q5: Are there still biases in the data we use to calculate global and U.S. temperatures?

Part of our post dataset production quality assurance is to test the data to see if we can identify any biases in them. Alleged biases have been investigated as follows:

The two plots below are of global temperature time series, the top one uses the adjusted version of GHCN and the bottom one uses the raw GHCN data. Both time series reveal that the earth is warming. This indicates that the observed warming cannot be an artifact of the adjustment process as the unadjusted GHCN version shows similar amounts of warming and the adjustments applied to raw ocean data decrease the amount of indicated warming. 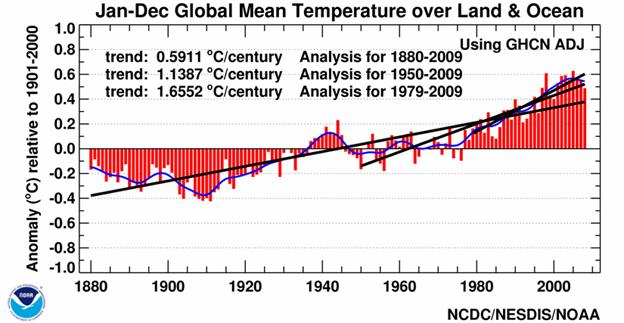 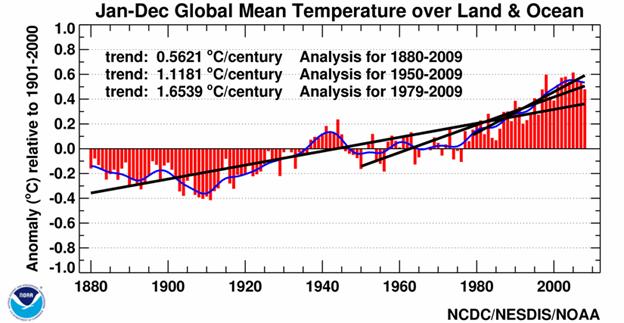 At NOAA, data have always been made available to the public. The updated GHCN and USHCN station data used by NOAA and other groups who monitor the global and U.S. climate have been continuously available each month via ftp from the NCEI web site since the 1990s. We are now in the final stage of preparing for the release of a major update in our global surface temperature data and processing system scheduled for spring of 2010. The new version of GHCN (referred to as version 2.5) will have more data as a result of recent international data exchange efforts. The newly developed adjustment methodology now being used for our U.S. data is being applied to the global dataset to make more accurate corrections. Code for this processing will be made available upon acceptance and implementation. Also, with the data release will be the release of software and data assessment files to improve the transparency of our process. We invite any and all users to investigate the data, adjustments, and processing. The same transparency of process is available for the sea surface temperature data. Information about the extended reconstruction sea surface temperature (ERSST) analysis is available to all users.

Q7: What are the processing steps for the data?

The flowcharts below outline the various processing steps discussed in the questions above. 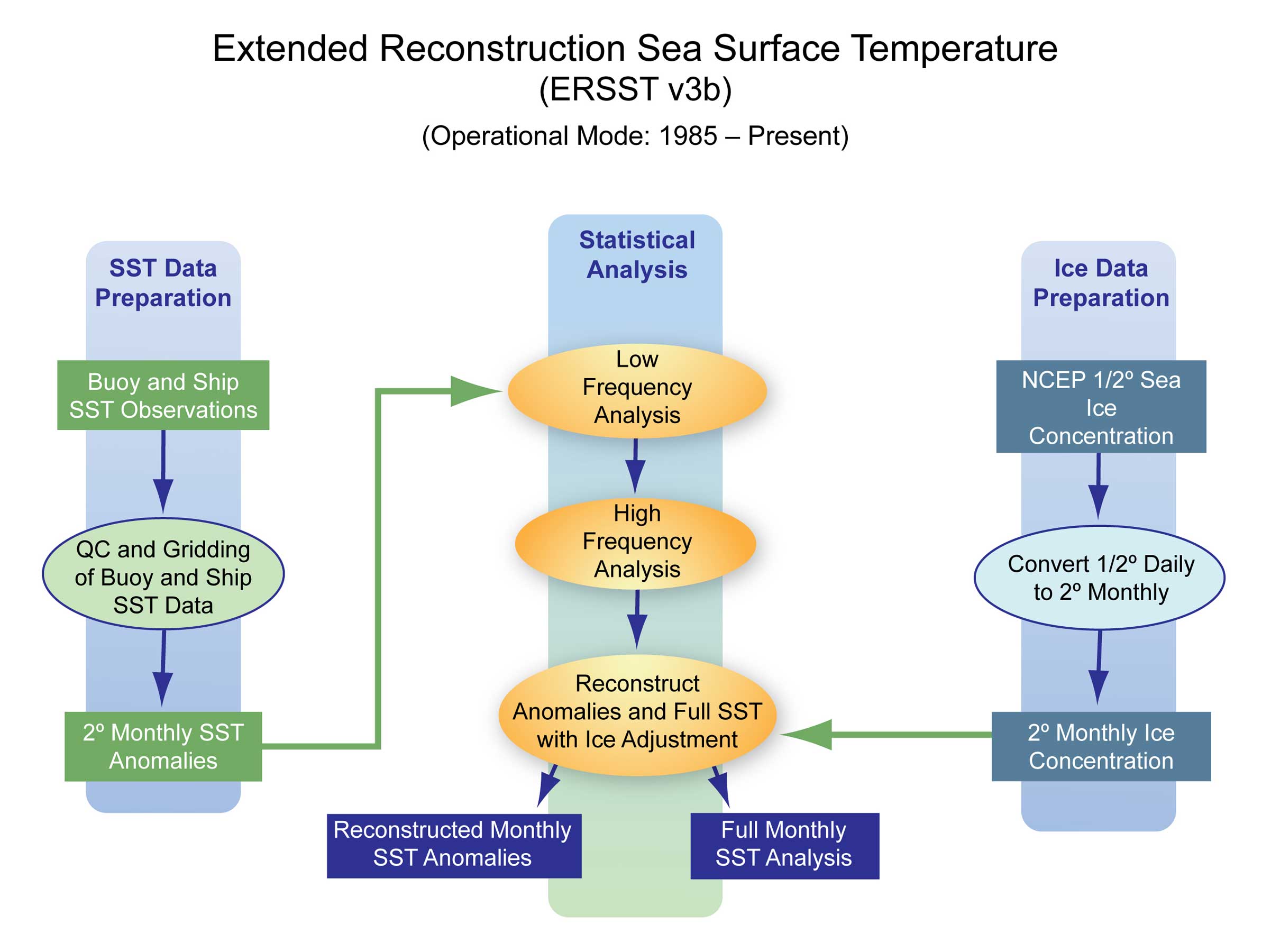 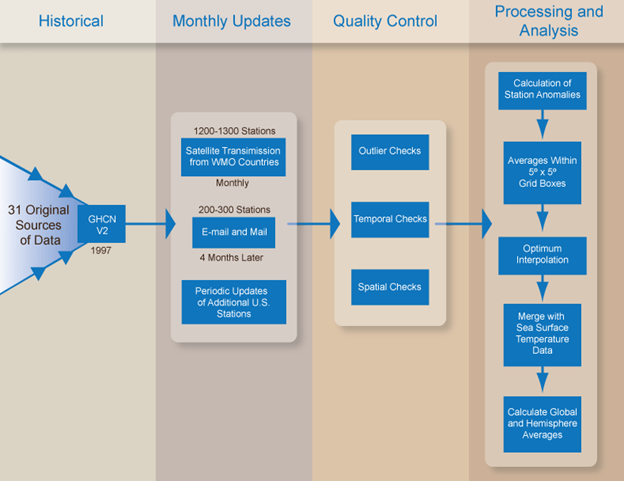